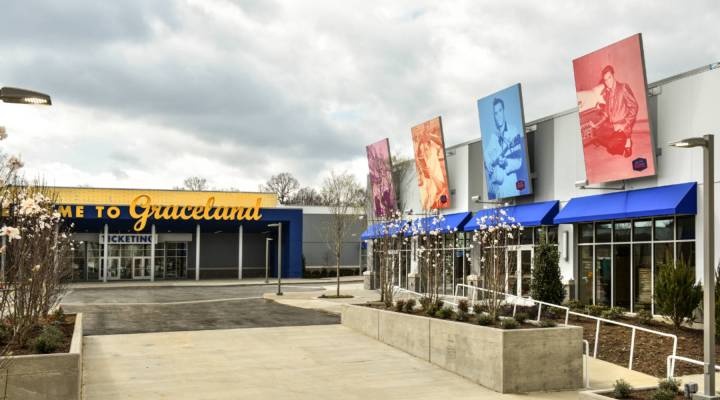 COPY
The new visitors’ center at Graceland, called Elvis Presley’s Memphis, includes museums, restaurants and gift shops. It opens on Thursday and represents the largest expansion of the Memphis tourist attraction since it opened in 1982.  Courtesy of Elvis Presley Enterprises

The new visitors’ center at Graceland, called Elvis Presley’s Memphis, includes museums, restaurants and gift shops. It opens on Thursday and represents the largest expansion of the Memphis tourist attraction since it opened in 1982.  Courtesy of Elvis Presley Enterprises
Listen Now

Nearly 40 years after his death, Elvis Presley is getting a King-sized complex of buildings surrounding his famous home, Graceland, in Memphis, Tennesee. The popular destination for visitors just quintupled in size, a testament to the singer’s legacy and future earning potential.

Nearly 600,000 people visit Graceland annually. For fans such as Marvin Hernandez, of Stockton, California, a trip inside Elvis’ inner sanctum is an emotional pilgrimage.

“I mean, it’s something indescribable, but it brings you nostalgia and makes you feel a little sad at the same time, but happy to be here,” Hernandez said.

The home and its 13.5-acre property remain a time capsule of 1970s superstar kitsch.

But just across the street, an enormous new entertainment complex will now beckon future generations of fans. The 200,000-square-foot facility called Elvis Presley’s Memphis contains museums dedicated to his cars, airplanes, artifacts from the Graceland archives and a collection of objects from the famous Sun Studio belonging to the estate of Sam Phillips. There are new restaurants, gift shops and a performance space that can double as a movie soundstage.

A ticket to see the house and all the new bells and whistles is about $60.

The visitors center comes on the heels of a new 450-room resort hotel called the Guest House at Graceland, now the third-largest hotel in Memphis. The price tag for all of this: $137 million.

Given that many of Elvis’ original fans are in their 70s and 80s, it’s an unusual investment in a vintage pop culture icon.

Jack Soden, president and CEO of Elvis Presley Enterprises, which runs Graceland, said that “the resources and dominoes have finally lined up.”

The Elvis brand is still making money. Forbes placed Elvis as No. 4 on its 2016 list of top-earning dead celebrities, with an estimated income of $27 million.
The “King of Rock and Roll” still commands a fortune from film, records, licensing and tourism.

Soden said that the job of minting new Elvis fans is easy:

“Find ways to make the introduction between Elvis, his magic, and new eyes and ears and then just get out of the way and let it happen.”

When Graceland opened in 1982, Soden said that reporters asked him how long it could possibly keep the public’s interest. He now points out that a third of Graceland’s current guests were born after 1977, the year Elvis died. More than 20 million people have toured Elvis’ home.

For middle-aged tourists like Jim French from Kalispell, Montana, Elvis has little ways of bringing generations together.

“I came here, I wanted to see his birth certificate ’cause my daughter was born on the same day, just different year,” French said. “We kinda celebrate that day, kinda both of ‘em.”

Few rock stars have had such a long-term pull on the heartstrings. That goes for the purse strings, as well.