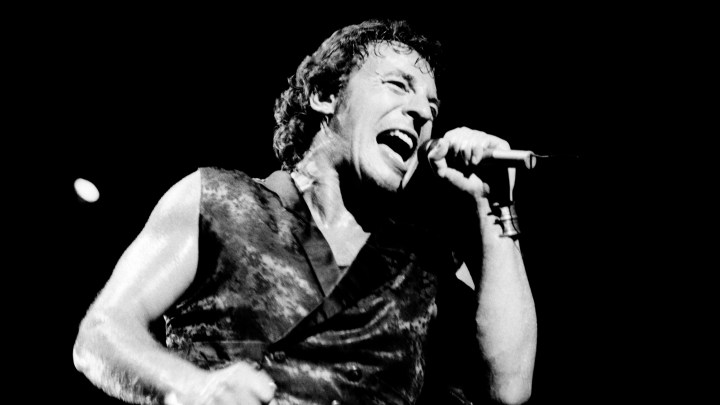 Bruce Springsteen performs, on October 10, 1988 during an Amnesty International concert Abidjan. STRINGER/AFP/Getty Images
By The Numbers

Bruce Springsteen has a lot of fans.

But, it’s not every fan who writes a book and then a movie about how The Boss changed their life. That was the case for journalist Sarfraz Manzoor, whose memoir, “Greetings from Bury Park,” became the inspiration for “Blinded by the Light,” a coming-of-age film, out this week, about a young British teenager of Pakistani descent who discovers Springsteen’s music. The movie features many of Springsteen’s songs, and shares its title with the Springsteen-penned song made famous by Manfred Mann’s Earth Band.

When he’s not inspiring teens across the pond, Bruce Springsteen has been busy for the last five decades smashing musical records, starring in a Broadway show and once, even trying to sneak into Graceland, Elvis’ mansion in Memphis.

In honor of The Boss, let’s do the numbers on Bruce Springsteen.

From a young age, Springsteen loved music, and more particularly, rock music. He often talks about watching the likes of The Beatles and Elvis Presley on “The Ed Sullivan Show” growing up. In 1963, he got his first guitar for $18. When he was 15, his mother took out a loan to buy him a $60 Kent guitar.

By the end of the 1960s and into the 1970s, while spending time in Asbury Park, New Jersey, Springsteen would jam with a number of bands, playing at Sweet 16 celebrations, drive-in movie theaters, and even a psychiatric hospital. During that time, he would meet future members of the E Street Band, including Clarence Clemons and Danny Federici, part of a lineup of musicians who would play alongside him throughout his career. It was also at this time that Springsteen got his nickname — The Boss — because after shows he would handle and distribute the money for musical gigs to his fellow bandmates.

In 1972, Springsteen signed with Columbia Records, and released two albums. His third, “Born To Run,” dropped in 1975 and was his first album to hit the Billboard Top 200, peaking at No. 3 that year.

“Born in the U.S.A.” propelled Springsteen to global stardom, and the album reached the No. 1 spot in Billboard’s Top 200, and sold out arena after arena in its subsequent 15-month international tour. The album, which Springsteen had originally written 70 songs for, spent seven weeks at No.1 on the charts. The album also generated seven Billboard Top 10 singles, including the eponymous “Born in the U.S.A., ”I’m on Fire” and “Dancing in the Dark.” Since its release, the RIAA has certified the album platinum 15 times.

Later that year, “Dancing in the Dark” would eventually help him earn his first Grammy for Best Rock Vocal. Since then, Springsteen has won 19 more Grammy awards in categories including “Song of the Year,” “Best Rock Album,” and “Best Rock Song.” In total, he has been nominated for 50 Grammy awards.

Today, the RIAA ranks Springsteen as the 15th highest selling musician of all time, beating out musical acts such as Madonna, Mariah Carey and Fleetwood Mac.

Well into his 60s, The Boss hasn’t let up — still releasing music and touring across the world.

In late August 2016, Springsteen, known for his long concerts, broke his domestic concert runtime record, with his Philadelphia show spanning four hours and four minutes. His all-time concert record isn’t far off though — a 2012 show in Helsinki rang in at four hours and six minutes. At the time of the concert, Springsteen was 62 years old.

From October 2017 to December 2018, “Springsteen on Broadway” hit the The Great White Way — two hours of music and storytelling, and even a cameo by Patti Scialfa, E Street Band member and Springsteen’s wife. Over the course of the show’s 58-week run, it made $106.8 million. The one-man show broke the record for the highest selling Broadway tickets on the secondary market, beating out vastly popular shows such as “Hamilton” — the average ticket for Springsteen’s show on the resale market reached upwards of $1,800 per ticket.

Today, Springsteen is one Emmy away from reaching the coveted “EGOT” status, which includes artists who have won an Academy, Emmy, Grammy and Tony award. In 2019, his Netflix special “Springsteen on Broadway” was nominated for an Emmy in the Outstanding Variety Special (Pre-Recorded) category. He previously won a Tony for the same show, an Oscar for “Streets of Philadelphia,” an original song from the 1994 film “Philadelphia,” as well as two Golden Globes.

In 1999, Springsteen was inducted into the Rock & Roll Hall of Fame.