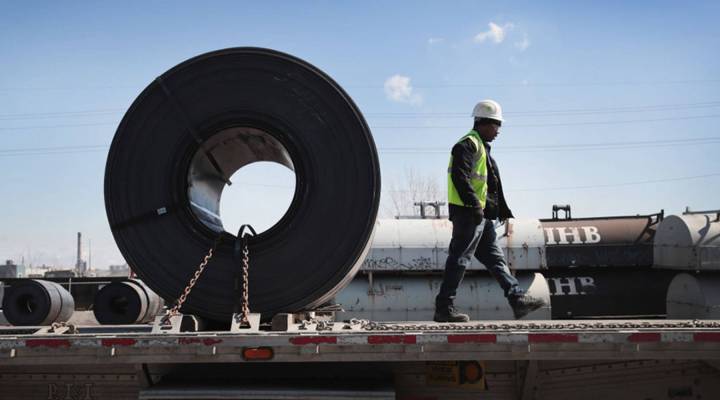 COPY
Steel is loaded onto a truck for shipping at the NLMK Indiana steel mill in March in Portage, Indiana. Scott Olson/Getty Images
Trade showdown

Steel is loaded onto a truck for shipping at the NLMK Indiana steel mill in March in Portage, Indiana. Scott Olson/Getty Images
Listen Now

We checked in with Todd Adams, who is vice president of Stainless Imports Inc., a small, family-owned stainless steel manufacturer based in Florida. We’ve had Adams on the show a couple of times talking about the process of applying for an exclusion. In his case, he had shipments of steel tubing on the water en route from China when the tariffs were announced. It was an unusually large order for his company, and he had to pay hundreds of thousands of dollars in tariffs, which just about cancelled out his life savings.

Last time we talked with him, he was scheduled to testify in front of Congress (video below) after his original exclusion application was denied because of an error in the code he used on the form. Marketplace’s Amy Scott asked Adams what happened:

Well, the experience, it was everything that you’d imagine. You know, the stately boardroom with hundreds of people watching you … and I think it went surprisingly well. I made my point, and there were some changes made to the exemption process that accommodated my concerns as well as the concerns of the three other companies that also testified alongside me. My main push was for the exemption requests to be retroactive to the first date they’re submitted, not the first day that the Commerce Department decides to look at the request and enter it into their system. And that still didn’t give me the exemption. I’m still working on that. I’m now talking to U.S. Customs for the correct import code. There was a discrepancy with that, so it’s definitely a bureaucratic process and I’m not happy yet, not made whole yet, but I do feel like we made significant progress by testifying.

Adams also talked about his company’s vulnerability to the most recent round of tariffs on $200 billion worth of Chinese products:

These new Section 301 tariffs do affect our day-to-day business with regards to the sanitary fittings that we provide in food factories. It’s basically just led to [an] industrywide price increase, which will in turn be passed down to the consumer and it will be reflected in the price of food.