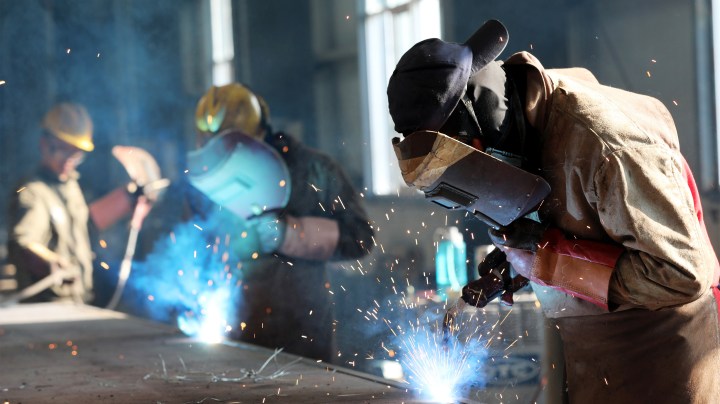 COPY
A worker cutting steel at a factory in Huaibei in China's eastern Anhui province in May 2018. AFP via Getty Images
Trade showdown

A worker cutting steel at a factory in Huaibei in China's eastern Anhui province in May 2018. AFP via Getty Images
Listen Now

It’s going to be a busy week in international commerce. President Trump is expected to sign the U.S.-Mexico-Canada trade agreement this week. Brexit is coming up on Friday. And slipping in under the radar last week was another development in the trade war: an expansion of the steel and aluminum tariffs.

The Trump administration plans to hike tariffs on items made mostly of metal — an extra 25% on steel and 10% on aluminum for items like wires, nails and staples. After the original tariffs made raw metal more expensive, U.S. manufacturers like Tom Gold of the Acme Staple Company in New Hampshire had a pretty predictable predicament.

“Our cost of raw materials obviously went up on an immediate basis,” Gold said.

When the materials for his staples went up, so did his prices. He held on to his customers — Acme makes specialty staples — but a lot of other U.S. manufacturers struggled.

“You have all these producers who instead of bringing in the primary steel and aluminum products and making something out of it, are just going to buy those products somewhere else,” said Inu Manak, a fellow at the Cato Institute.

The Trump administration says new tariffs will help protect the industries harmed by the first tariffs. Which, according to Christine McDaniel at the Mercatus Center, creates a “cascading tariff effect where first we have tariffs on steel, next we have tariffs on products that include steel.”

Which is what economists predicted might happen at the beginning of the trade war. In the meantime, for Tom Gold at Acme Staples, this could be a win.

I’m hopeful this will enable us to compete more evenly, not just with China, but a lot of staples come from Europe as well,” Gold said.

Assuming no legal challenges and no push back from Congress, the new tariffs will kick in on Feb. 8.