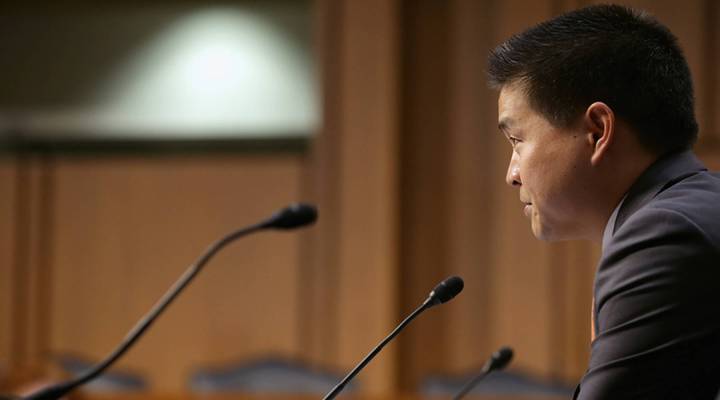 Marketplace Tech is exploring investment technology as part of the Divided Decade project on the financial crisis of 2008. Brad Katsuyama started a new stock exchange, IEX, in 2012, with an aim to neutralize some impacts of high-frequency trading. He and his partners did that by slowing down stock data flowing through the system — by a whole 350 millionths of a second. In 2017, one of IEX’s critics, the New York Stock Exchange, introduced its own speed bump. The following is part two of Marketplace Tech’s look at IEX, an edited transcript of Molly Wood’s conversation with Brad Katsuyama. He starts by describing the mechanics of the IEX speed bump.

Brad Katsuyama: We took 38.5 miles of coiled cable. We put it in a box and stuck that in between us and everyone who connects to IEX. It creates 350 millionths of a second of a pause. But that pause caused probably one of the biggest controversies in recent memory in the stock market because high-speed traders were very upset. But by pausing the market for 350 microseconds, it actually gives information time to disseminate, and it puts investors on equal footing to high-speed traders.

Molly Wood: Who’s buying it? You know, who wants it, and what’s your business model looking like now?

Katsuyama: One interesting part of being a stock exchange is you have to actually ask the SEC for permission to do that. It was a two-year process for us, and it was highly, highly controversial. And when you look at the landscape of who wanted us to get approved, there were long-term investors like Capital Group and T. Rowe Price and Franklin Templeton, etc. There were some brokers that wanted us to get approved. Goldman Sachs wrote a positive letter, JPMorgan made positive comments. When you look at who didn’t want IEX to get approved, it was all the stock exchanges and a very narrow group of high-frequency traders. It was like the perfect setup. So this is kind of a battle between long-term investors against the exchanges and, you know, a small group of high-speed traders.

Wood: So you’re trying to create an ecosystem that companies would want to be a part of because it benefits them in the long term. However, I feel like the counterargument to that is the system seems to be working. You know, yes, the shareholder base might turn over a lot, but everybody’s making money right now.

Katsuyama: Well, I think a bull market kind of solves all ills. Although there are companies that have had mini-flash crashes in their stocks. There are companies that have had buybacks and have watched them kind of get manipulated. And I think that focusing on people who first and foremost have experienced problems and have been unsatisfied with the answers that they’ve received as to why these problems exist, that’s a great starting point. It doesn’t change overnight.

Click here for an extended interview with Brad Katsuyama.