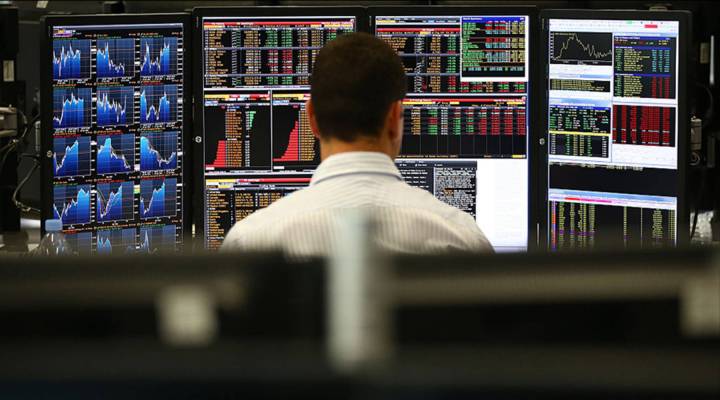 COPY
An employee views trading screens at the offices of Panmure Gordon and Co. in 2014 in London. Carl Court/Getty Images
Divided Decade

An employee views trading screens at the offices of Panmure Gordon and Co. in 2014 in London. Carl Court/Getty Images
Listen Now

When you conjure an image of the stock market, it’s likely the tumultuous floor on Wall Street with traders holding a phone to either ear, scrambling and yelling. But computer algorithms make most trades today, within fractions of a second, and you could say the real NYSE action is in Mahwah, New Jersey, where its data center sits. Marketplace Tech is exploring investment technology as part of the Divided Decade project on the financial crisis of 2008. In the first of two installments, we hear from critics of HFT and its effect on the markets overall.

High-frequency trading relies on algorithms, and professor Jonathan Macey of the Yale School of Management labels some of them parasitic. He compares the strategy to a motorcycle rider noticing a truck driver on a highway, and then racing ahead to buy up all the gas along the route. When the truck driver gets to the next gas station, the rider knows the tanker must fill up and sells it to the driver at a premium. Like the motorcycle rider in this scenario, stock brokers have an incentive to do end-runs around investors to sell stocks to them at higher prices.

It’s a practice made possible thanks to co-locating computers at or near data centers, buying data tools from the exchanges, he said, and getting pricing information milliseconds ahead of others in the system. Macey said while it might be small amounts of money on individual trades, “there [are] so many trades that it adds up into the billions of dollars.”

Brad Katsuyama is a former trader who started looking into the machinations of high-frequency trading before the financial crisis. He describes the strategy of some traders, who use technology specifically to get information first: “They know the horse race is over, and they’re betting against people who still think the race is happening.”

Katsuyama sees this practice, and businesses built around it, as creating unfair advantages in trading. His response was to start a new stock exchange called IEX, or Investors Exchange, in 2012. Katsuyama said HFT technologies are rigging the market in a way that means the system as a whole is “benefiting fewer people.”

To Katsuyama, the bigger problem isn’t the technology — it’s the way in which it’s being used. Fifty to 60 percent of the market is classified as high-frequency trading, “so the majority of the stock market are now machines [that] really don’t even understand the fundamentals of a company.” The algorithms are built to trade based upon the reactions of other traders, which he said is “a significant problem.”

Katsuyama has set out to build an exchange that tunes out the signals of high-frequency trading focused on short-terms gains, to offer better information to long-term investors concerned with the underlying fundamentals of a company — its structure, business model or other factors of overall business health.

In our second installment, Katsuyama shares more about the technology and business model of IEX and what its future might hold.