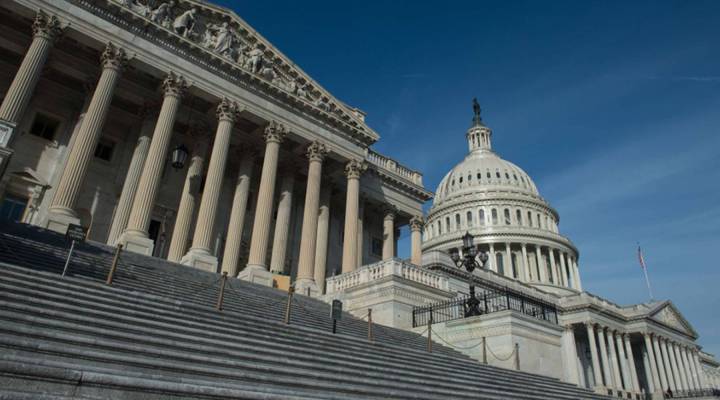 Congress is making some progress on spending bills for fiscal year 2019, which starts Oct. 1. But, while lawmakers fight over next year’s budget, federal agencies are still struggling to  spend all the money they got this year, because what they don’t use by the end of the month, Congress takes back. So cue the September spending spree, which has become so routine, many agencies plan for it. Up to a point, anyway.

But as of August, eight of the 10 biggest spenders, like the Pentagon and Justice Department, weren’t getting that money out the door fast enough. As a group, they had worked through less than 40 percent of their budgets, or roughly just $240 billion of more than $1 trillion.

“This is very late” to be getting a budget, Alexander said.

And, because spending caps were lifted, even more money needs to go out the door. The Pentagon, for instance, is looking at an extra $80 billion. And no one wants to spend everything early on, or they could end up short. This doesn’t always make for smart shopping, one reason agencies don’t like to talk about what’s left in their wallets. Last year, they dropped $50 billion in the last week of September, around five times what they burn through in a normal week. They bought furniture and computers.

“You can buy cars, vehicles, motorcycles, bikes and scooters,” said Adam Andrzejewski, CEO and founder of OpenTheBooks.com, a website that tracks government spending. “You can buy bombs, bulk explosives and grenades. You can buy fidget spinners, snow boarding equipment and booze for your liquor cabinet.”

Even with all those opportunities, the spendathon almost always ends up being a race against the clock, so some clever government employees have figured out a workaround. If  you’re a procurement officer on the West Coast, prepare to work really late on Sept. 30.

Neale Mahoney, an economist at the University of Chicago who has studied government contracting, says a retired naval officer told him, “Every year on Sept. 30 at 9 p.m. Pacific he’d get a call from the Pentagon saying, ‘It’s midnight here, so we can’t spend any more of this year’s budget, but you have three hours left.'”

Mahoney said contractors would sit in their cars in the parking lot, waiting to sign last-minute deals. He said Pentagon spending data backs this up: “For the types of small contracts that you can get out the door really quickly, you do see this spike on Sept. 30 on the West Coast of the United States.”

And if all else fails, there are still a few hours on the clock in Hawaii.