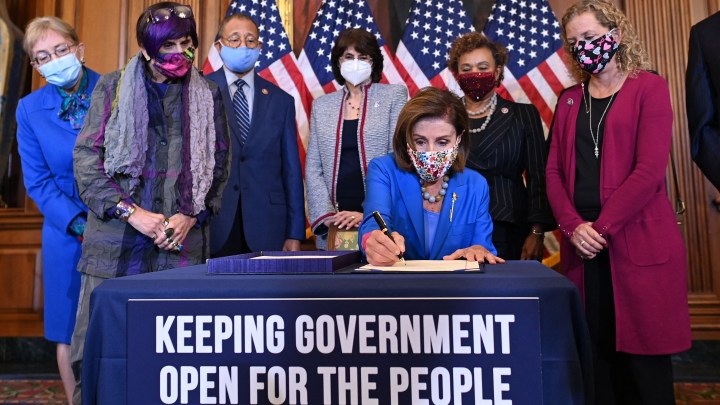 COPY
House Speaker Nancy Pelosi signs a bill at the Capitol on Sept. 30 to fund the U.S. government and avoid a federal shutdown. Mandel Ngan/AFP via Getty Images

House Speaker Nancy Pelosi signs a bill at the Capitol on Sept. 30 to fund the U.S. government and avoid a federal shutdown. Mandel Ngan/AFP via Getty Images
Listen Now

While Congress has averted a government shutdown for now, the stopgap bill passed Thursday will only fund the government through Dec. 3.

So how does the federal government function when it’s not clear what the next budget will cover?

To the general public, the government will seem to be operating normally this fall.

“Social Security sends out the check. Medicare pays for your stuff. Offices are open. You can get your passport,” said Laura Blessing at Georgetown University’s Government Affairs Institute.

The temporary funding bill includes extra funding to repair hurricane damage and resettle refugees. So “the damage that’s done by funding the government in this way is largely hidden from view,” she said.

Here’s how it’s supposed to work: Congress passes a series of spending bills and the president signs them before the government’s new fiscal year starts on Oct. 1. But because lawmakers couldn’t agree on those — instead passing a stopgap funding bill — agencies keep running on last year’s budget.

“So, for me, the metaphor really is, you know, you’re going to buy and eat a whole loaf of bread, but you’re only given the money to buy each slice of bread individually, one at a time,” he said.

You can’t buy in bulk, so you end up spending a lot more — and you can’t change how you spend money. So if a Navy ship is being repaired and you need more welders than you had in last year’s budget? Too bad.

“What you can’t do is go out, post an ad and say, ‘We need welders and solderers. Hire here today,’ and then bring them on board quickly,” said Mackenzie Eaglen, a defense analyst at the American Enterprise Institute.

All this adds up to unnecessary waste and inefficiency, which taxpayers will pay for, eventually — even though they may not notice anything different over the next few months.