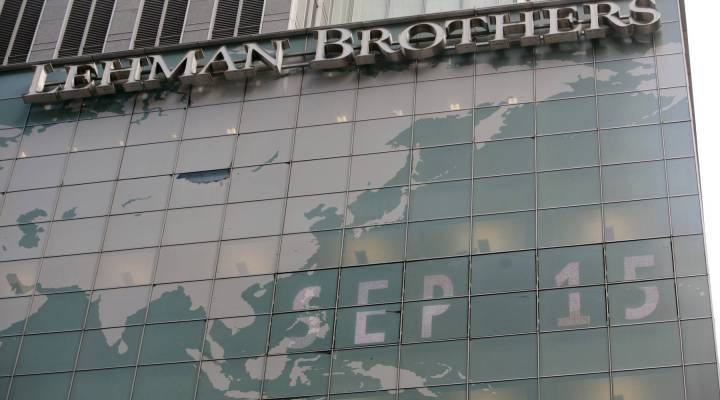 It’s been 10 years since the collapse of Lehman Brothers and a financial crisis that rolled over the country. Many people dealt with it in different ways. Diane Swonk, an economist with Grant Thornton, kept a running diary. It’s not just a diary of all the things she wrote during that period, she said, but she also “went back and filled in the blanks on it, because it was just such an extraordinary period in time.” She spoke with Sabri Ben-Achour for Marketplace Morning Report.

Sabri Ben-Achour: During this weekend, when Lehman was looking to make these last ditch efforts to try and find someone, Barclays or Bank of America, somebody to buy them up to help save them, that’s when you were talking to a conference of bankruptcy lawyers. You have a fun quote about that.

Diane Swonk: From September 13, 2008: “I spoke at a breakfast and found myself struggling to describe an economy in quicksand, especially as Lehman’s fate was in the balance. I finished up with questions following my presentation, and to my shock a full bar was open at the back of the room. Given the incentives of the group, I wasn’t sure if it was to pop champagne corks or drown in their sorrows.” This was a group I was talking to, of bankruptcy experts – and they had an odd way of rejoicing in dark news on the economy.

Ben-Achour: Did people there really take that as good news?

Swonk: It wasn’t as bad a news as you would expect, given the audience that I was speaking to because they really didn’t understand the magnitude of what was happening. Most people didn’t understand the magnitude of what was happening and we knew it was bad. And that’s because the panic that ensued and the tentacles that people just didn’t realize that spread throughout the financial system globally. It was awful in financial markets. Remember within weeks of this, we broke the buck on money market accounts and companies that had relied on short-term funding to do payroll, overnight funding … it worked forever, until it didn’t. And when it didn’t, they had to fire everyone overnight. I mean the kinds of employment losses we were seeing were just mounting by the day. It was so incredibly destructive.

Ben-Achour: Your role at the time was to watch the financial system, report on it, understand what was going on. But this was something not a lot of people saw coming, and I wonder if it changed the way that you do your work.

Swonk: One of the things that I do now and I always remind clients and our senior management: What do you need to do now, that’s easy to hedge, if the economy were to falter? Because I can tell you some of the ways that it will look when it falters. I can’t tell you exactly when, but that’s what I do now as I always ask, what am I wrong about? What could I be wrong about? What am I missing? And what’s happening in the shadows faster than we can realize, especially with things like Fintech. So yes, it has changed how I approach things. I’m much more cautious than I used to be. And the bottom line is cycles are a part of life and we need to be able to deal with economic cycles. That’s also part of human nature and that’s what this is all about, after all.