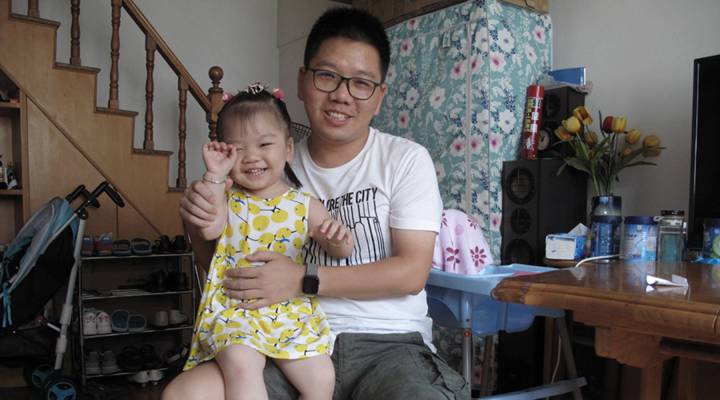 COPY
For the sake of his daughter Yao Yao, Chen Jun said he’s always on the lookout to upgrade his skills and improve his financial prospects by buying things like educational podcasts. Charles Zhang/Marketplace

For the sake of his daughter Yao Yao, Chen Jun said he’s always on the lookout to upgrade his skills and improve his financial prospects by buying things like educational podcasts. Charles Zhang/Marketplace
Listen Now

Chen Jun, 34, rents a small apartment in Shanghai. He, his wife and his kid share one bedroom, his brother’s family shares another and his parents sleep on a bed in the corner of the living room next to the entrance.

The living arrangement is a bit of a squeeze, but according to official statistics, Chen’s living situation is common for migrant workers, like his family, who come from the countryside.

Shanghai is much more expensive than his native Hubei Province in central China.

With a 2-year-old daughter and family responsibilities, Chen said he must work hard and dream big.

For several years, he worked as a database engineer. Chen was making $2,300 a month, which is almost double the average salary for white-collar workers in Shanghai. However, Chen said he was always on the lookout to upgrade his skills and improve his financial prospects.

“I was working at a state-owned insurance firm, so it was a bit stressful. I frequently worked overtime, sometimes throughout the weekend without a break,” he said.

Eventually, he came across a podcast from bitcoin tycoon Li Xiaolai.

“The podcast is called ‘The Path to Financial Freedom.’ Who wouldn’t be attracted by that?” Chen said.

He said the podcast played a big role in his decision to quit his stable job to invest in cryptocurrency.

Chen pays an annual subscription fee of 199 renminbi ($29), which he said is affordable.

There are podcasts in China that are ad driven and free for listeners, just like in the United States. Chen said though that he believes the quality of the free content is more entertainment driven and not as useful for his self-improvement.

“Mobile payment has made it so convenient and these professional audio platforms offer good quality podcasts for a small fee,” Chen said.

He has paid for more than a dozen podcasts, mostly educational lectures on Chinese history, health, the economy, finance and learning methods. Altogether he has spent $160 on podcasts.

Podcasts with subscription fees, interactive Q&A’s online with experts or celebrities and live-streaming lecture-sessions where the audience can participate and pay as they wish are what people in China refer to as the “pay-for-knowledge” economy.

It was estimated to be worth $7.3 billion last year, with the bulk of the revenues from paid podcasts, according to a research institute run by China’s State Administration of Press, Publication, Radio, Film and Television. The figure is focused only on consumers paying directly for content online and does not include ad-driven podcasts.

By comparison, the U.S. podcast industry mainly makes money through advertising. It reported ad revenues amounting to $314 million last year, according to the Interactive Advertising Bureau.

Getting consumers to pay directly for content is not a new idea. The trend has been slow to catch on in the United States, but platforms like Patreon allow podcasters to be paid by their passionate fans.

In China, however, a separate government-linked research institute has found that the pay-for-knowledge economy is a multibillion dollar industry because of a combination of factors: desire for focused information that’s useful and relevant; the need to update skills constantly in China’s competitive job market; the ease of paying on a mobile phone; and FOMO — the fear of missing out.

“People may not be purchasing knowledge to learn, but the simple act of buying information online helps alleviate people’s anxiety about their knowledge gap and gives people a sense of security that they are not left behind,” a report by a research institute under state-owned newspaper the People’s Daily said.

Chen Jun’s cellphone is loaded with paid podcasts with practical titles like “How to Be a Master in Optimum Learning, “How to Get Healthy Returns from the Stock Market and “Effective Ways to Manage Your Health.”

He also paid for a podcast with 218,000 subscribers called “How to Make Your Voice More Attractive.”

The man behind this popular show is broadcasting professor Zheng Wei, of Kede College at Capital Normal University in Beijing. He said most of his subscribers are white-collar workers anxious to keep up.

“Some of them may have worked in cities like Beijing for many years, but they still have accents from their villages and make fools of themselves in social settings,” Zheng said.

For less than $3, Zheng’s podcast — on the Dedao audio platform — promises to teach listeners to “master a scientific way to pronounce and speak standard Mandarin, improve their accents” and “have a good voice that will yield twice the result with half the effort.”

Zheng is not worried that similar tips can be found online for free.

“China’s middle class feel that free content will not be good quality and that paid products are packed with useful information and save people time,” Zheng said.

The most popular paid podcast genres in China are Chinese poetry and history, self-growth, finance, business and education.

To sell more professional content, China’s audio platforms invite experts and work with them to develop podcasts. Podcast platforms are still experimenting with what content people will pay for.

The industry has cast its net 6,000 miles away to Minnesota, where Timothy Taylor with the Journal of Economic Perspectives has just signed a deal to do a podcast for China’s biggest audio platform, Ximalaya.

Taylor, who  writes a blog called “The Conversable Economist,” said he does not plan to do a podcast in the United States.

He said he was approached by an intermediary group to meet with the Ximalaya audio platform and was surprised that there was interest in a podcast modeled after his book, “The Instant Economist,” which explains basic economic terms.

“I doubt that [the podcast will] work as a commercial venture in the U.S. All the classes at MIT are free online now you know, so if you want an intro econ class, you can go get one,” Taylor said.

Taylor said he worked closely with the Ximalaya platform to develop a 90-episode podcast. The platform is in charge of marketing his podcast, which means Taylor didn’t get a final say on the podcast title.

“I wanted it to be something like ‘Telling the Story of Economics’ and they wanted something more firmly practical,” Taylor said.

In the end, Ximalaya named his podcast “Stanford Classical Economics,” which references his previous teaching stint at the prestigious Stanford University.

So far, Taylor’s podcast has some 7,000 subscribers.

Broadcasting professor Zheng Wei says payout from podcast platforms can be very lucrative for academics like himself.

“I promise you, even if you don’t want to learn, lots of other people are willing to learn, and they will have an advantage over you if you don’t learn those lessons as well,” a subscriber wrote on the podcast’s comment section.

Taylor is taking the experience of working with China’s podcast platform in stride, although he said the most common reaction from his family and friends about his podcast deal was concern about censorship.

He said he is not aware of the platform censoring his content.

If the platform cancels his show before the end of 90 episodes, Taylor said his contract allows him to keep the advance money.

“My family will be able to take a couple of nice vacations that we wouldn’t have otherwise taken because we got the advance money,” Taylor said.

Economic podcasts can be big moneymakers.

One of the most popular paid podcasts in China is a show by a former economics professor from the prestigious Peking University, Xue Zhaofeng. He has sold 55 million renminbi ($8 million) worth in podcasts on the Dedao audio platform.

Xue was unavailable for comment for this report. However, voice coach Zheng, who broadcasts on the same audio platform as Xue, said the pay can be good for podcasters.

“The revenue share from the podcast platform Dedao can be more than what we as professors can earn in 10 years or even a lifetime in China,” Zheng said.

He plans to make more podcasts because he said people are eager to improve themselves.

I ask the broadcast expert for his assessment on my skills.

“Your Chinese isn’t bad for someone not born in China,” Zheng said. “However, if you want to improve, you should subscribe to my podcast,” he said.