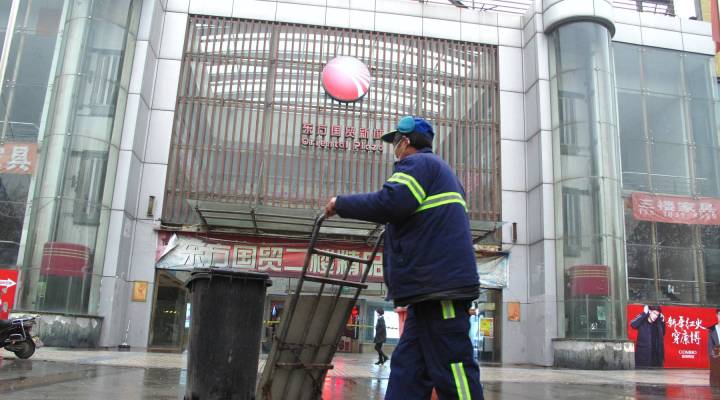 COPY
Two out of five residents in Shanghai are migrants, who mainly take up the jobs others don't want. The government is trying to stop migrants from poorer regions from flooding megacities. Jennifer Pak/Marketplace

Two out of five residents in Shanghai are migrants, who mainly take up the jobs others don't want. The government is trying to stop migrants from poorer regions from flooding megacities. Jennifer Pak/Marketplace
Listen Now

That has implications for things like traffic. Pedestrians need to constantly be on alert. Even if a traffic light is green, electric bikes and bicycles will still be moving forward from all directions.

It is just as stressful to ride the public transit.

“Whether you take the bus or metro, people are squished together,” said Chen Guoqiang, who has been working in Shanghai for six years. He added that the air is polluted and homes are expensive to rent.

Chinese officials have labeled these problems “big city diseases.” They believe the cure is to limit the population size. Most of the city’s growth comes from migrants like Chen, from other parts of China, who make up 40 percent of  Shanghai’s residents.

China’s Cabinet, or the State Council, has announced that by 2035, the number of permanent residents in Shanghai will be “tightly controlled” at around 25 million people. The city’s official population is already close to that figure at 24.1 million. Some experts are skeptical that the government can achieve its target.

However, the research director of E-House China R&D Institute, Yan Yuejin, said the plan is feasible since the authorities will only release 3,200 square kilometers (1,235 square miles) of land for construction.

“The land supply in this latest government plan is very small. If land is controlled, then many other things will be controlled,” Yan said. Such as the number of housing units available. He says this policy will result in fewer homes built, which will likely mean housing costs  staying high. It could also mean less space would be available for industries deemed undesirable and more people could be pushed out of the city.

City officials have pushed out cheap factories in the northern Baoshan district of Shanghai in favor of new housing and luxury shopping malls for the city’s newly wealthy.

Other measures may involve targeting ways migrants from outside the city find affordable housing, such as living in buildings without permits or sharing a tiny apartment with several families.

Officials could crack down harder on these living arrangements, demographics expert Huang Wenzheng said. If these methods don’t work, Shanghai may take cues from other megacities facing the same issues.

“Beijing has demolished some schools for the children of migrant workers. Shanghai may take similar action. Another measure is to clear out low-end businesses,” Huang said.

Variations of these measures have been implemented in the past, but these are expected to intensify with the latest announcement.

The effects are being felt at the Oriental Life Plaza in the northern end of Shanghai, where Chen and his wife run a tiny clothing shop catering to factory workers nearby. They have seen fewer customers since the neighboring textile and marble stone factories were demolished by the city for safety reasons and replaced by a new shopping mall and brick and stone villas.

“We are only able to cover expenses at this point,” Chen’s wife, Zhang Xiaoyan, said.

Without much foot traffic at the Oriental Life Plaza, Chen said, a third of the small food stalls have shut down. Their neighbors and friends have moved to smaller cities nearby, which is exactly what Shanghai officials want.

Perhaps the main tool the government uses to control the population of cities is a system called Hukou. It prevents people from rural areas from accessing certain social benefits in the cities, things like pensions and education.

Chen’s seven-year-old son Hao Hao, is about to start school. He does not have permission to complete his studies in Shanghai since his parents are not from the city.

Zhang Xiaoyan and son Hao Hao, 7, are forced to return to their hometown because of strict policies such as the Hukou.

Hao Hao and his mother will return to their hometown of Qichun County, in central Hubei province, leaving Chen to look after the shop in Shanghai.

It has become normal for husbands and wives to live hundreds of miles apart from their children. Families reunite on average once a year, if they’re lucky. China’s economic miracle was built on the sacrifices of these migrants, yet they are still sometimes treated in much the same way that undocumented workers are sometimes treated in the United States.

Despite these restrictions, there are still more people coming to Shanghai than leaving it, because they can earn at least twice as much as they would make in their hometowns.

Previous efforts to limit the number of people in megacities have all failed. Beijing authorities have recently taken a harder line. At the end of last year, they began forcefully evicting thousands of migrant workers by demolishing buildings deemed illegal and unsafe.

Those unable to find alternate living accommodations were forced to return to their home villages. It sparked a public outcry from human rights groups and a sympathetic middle class.

Courier services were the first to report a shortage of labor. These businesses rely on an army of migrants balancing packages and hot food on their electric bikes and bicycles and delivering them to busy office workers.

“I do not think there is any rational economic reason to limit the size of the population,” Huang said. If anything, he added, the city needs more people. Shanghai’s population is aging faster than that of other cities in China, he said. China’s state media reports that at the end of 2016, there were 4.58 million registered residents over the age of 60. It needs migrants to replenish the work force to achieve its goal of being a financial and high-tech hub, Huang said.

“China’s biggest resource is its population of almost 1.4 billion people. This advantage has led to recent economic and technological developments that have surpassed the U.S.,” Huang explained.

He said low-skilled migrants are part of that equation because they keep the city clean, feed its hungry workers and take care of its kids.

“High-end talent will suffer if these low-skilled workers are evicted. People will have to pay more for a nanny or a driver,” Huang said. China should allow freedom of movement, he added.

Otherwise, China’s next Jack Ma and Steve Jobs might end up stuck in their home villages without the resources to develop their talents.