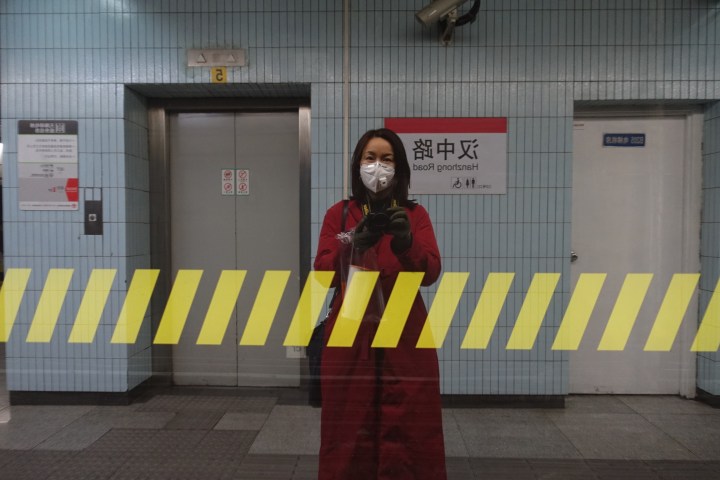 COPY
Marketplace's China correspondent Jennifer Pak used to wear face masks outdoors to protect against air pollution, but now the Chinese government advises residents to wear them whenever they are out of their homes. Jennifer Pak/Marketpace
COVID-19

Marketplace's China correspondent Jennifer Pak used to wear face masks outdoors to protect against air pollution, but now the Chinese government advises residents to wear them whenever they are out of their homes. Jennifer Pak/Marketpace
Listen Now

The Lunar New Year holiday is over for much of China after the country’s State Council extended the period until Monday in order to contain the spread of the new coronavirus.

However, many Chinese provinces and cities have extended the break to Feb. 9, including Shanghai.

The financial center, a city of 24 million, feels like a ghost town.

The roads near Marketplace’s Shanghai bureau are usually choked with cars, bicycles and electric bikes, with the bikes also weaving up and down the sidewalks.

However, the streets are nearly empty and, absent the traffic, the sound of birds singing is audible.

Tourists often take pictures of the 30,000-square foot Starbuck’s Reserve Roastery. It has barriers in place in case there are too many people lining up outside.

However, in an effort to prevent large crowds, the doors closed Jan. 27 and a sign outside said it will remain shut “until further notice” as part of the government’s “epidemic control efforts.”

Luckily, I can still get coffee at another Starbucks location across the street.

A sign on the door said customers must wear face masks to enter the shop.

Inside, hand sanitizer is provided next to the sugar and napkins, while signs on tables indicate that face masks should be kept on when customers are not eating or drinking.

There’s a lot of pressure to limit contact between people.

Hao Wu was the first of my friends in a week who would agree to meet up. Even so, he had a fight with his mother about going out to socialize before leaving home.

“My mother [said], ‘Are you going to go out and bring back the germs? We have old people at home, we have young kids at home. Don’t go out,’” Wu said.

He was visiting his family in Shanghai from New York and had brought plenty of face masks and hand sanitizers, both of which are in short supply in China.

According to the World Health Organization and the U.S. Centers for Disease Control and Prevention, the best ways to protect yourself from the coronavirus include:

Neither WHO nor the CDC lists face masks as a prevention tool against the virus, yet people still line up at a nearby pharmacy in the morning.

Shanghai’s government is rolling out a registration system for face mask purchases to prevent these long queues, but until it’s complete there are still people running from shop to shop to find stock.

I ran into an elderly couple who said they’ve searched a handful of shops without luck.

“Each mask can only last four hours. We use one every time we come out, and we don’t have anymore,” said the woman.

She tells me her surname is Mao before her husband pulls her away.

People are afraid to speak out.

Festive music and decorations adorn the HKRI Taikoo Hui shopping mall for the Lunar New Year, but inside, the shops are empty or shut.

Across the street, newly renovated shops by the subway station are deserted as well.

“I joke with my friend, it’s like an apocalypse movie happening in China right now,” my friend Hao Wu said. “There’s very few people on the streets. Chinese New Year is supposed to be a time of people getting together, celebrating,” he said.

Last year, Chinese consumers in the first seven days of the Lunar New Year spent 1.01 trillion yuan ($144 billion), which is an 8.5% increase from the previous year and the slowest pace of growth since 2011.

Business will be even worse this year for the likes of Yang Sihou, who sells fur hats and animal pelts off a trolley he pulls along the nearly empty street.

Chen Tailiang at the Song Ji bakery hasn’t seen many customers either.

He decided against returning to his hometown in eastern Jiangxi province for the holidays because of the virus.

Since he and his family live behind the bakery, he decided to keep the shop open. Chen said business is not great, but he expects things to improve eventually.

“People need food. When the virus is contained, things will get back to normal,” he said.

The U.S. State Department is advising Americans against traveling to China.

Meanwhile, Chinese residents and businesses are doing their own tracking of people they consider outsiders to contain the virus.

People entering the building where Marketplace’s office is must have their temperature checked, write their name, ID or passport number, phone contact and indicate whether they’ve been to Hubei province, the epicenter of the virus outbreak.

“It’s a critical period,” the security guard said. He would not say how the information will be used.

“Talking to you so close, it’s very dangerous, but I trust you’re not a carrier,” Wu said. That trust is based on blind faith.