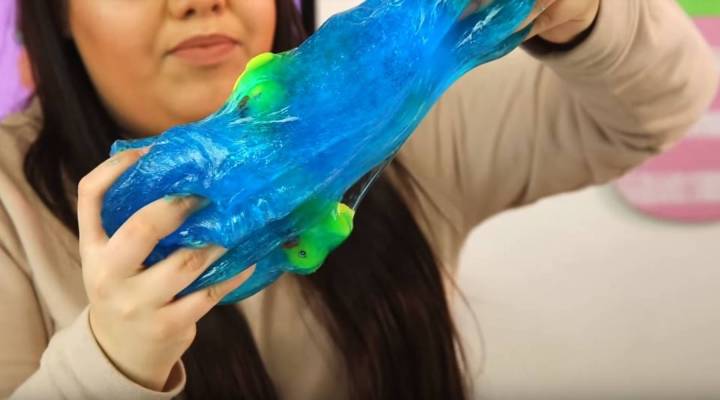 For lots of popular YouTubers, merchandise is the key to making real money. And 24-year-old Karina Garcia is the fairy-tale merch story. She was a waitress who dropped out of college and then made her first crafty DIY YouTube video in 2015. Now she’s got more than 7 million subscribers, and if your kids are begging you to make slime at home, she’s why. Garcia launched the slime phenomenon in 2016 with fun variations like bubble wrap slime and glitter. Now she’s got a line of at-home craft kits under the Craft City brand at Target. She told CNBC that her business makes about $2 million a year. As part of Marketplace Tech’s look at the growing “creator economy” of online and social media stars, Molly Wood talks with Garcia about making the move from the screen to the store. The following is an edited transcript of their conversation.

Karina Garcia: I remember thinking in the back of my head, I was like, “Wow, this would be really cool if I could not work anymore.” But in my head I was thinking, “I might make money one day that would replace a full-time job making minimum wage.” I never in a million years thought it would become my actual career. And it’s so funny because slime is a big part of my life. So my mom always makes fun of me, saying, “You bought this house with slime!” And it’s just so funny, but it’s really cool at the same time because — it’s slime. It’s so random.

Molly Wood: It’s so interesting because I feel like that’s the promise of this “creator economy.” But you have to understand how to translate this very specific thing that creators and influencers do into merchandising and business agreements. What were some of the biggest things that you encountered that you didn’t know how to deal with?

Garcia: It’s definitely really hard. I mean, when you come out with a product as a YouTuber, as an influencer, people are ready to rip you apart, even if your product is amazing. And at first, you feel disappointed, like, “Wow, I could have worked harder.” But now I’m kind of learning, telling myself, “No, that’s not true.” It is a great product! It’s just that people are always going to have something to say. And just the making of the product [is difficult] as well. For example, homemade slime wouldn’t pass all the tests to go on the shelves. That’s a really big process. Usually with my crafting, I never really do measurements. I eyeball everything, to be completely honest. So for this, I was like, “OK, I know I’m usually a hot mess in my videos, but I need to get it together and I need to figure out measurements, figure out everything and put that all into a box.”

Wood: So what’s your advice to people who are going to look to your success about being optimistic and working hard — but also being realistic?

Garcia: I would say be patient. A lot of people make YouTube videos for years because they love it and it’s their hobby. You can’t expect to see money. And when it comes to coming out with merchandise and stuff, I would just say find someone who has the same vision as you, who understands your brand 100 percent. You can’t go with someone who wants to, like, mold you into something you’re not or change you.