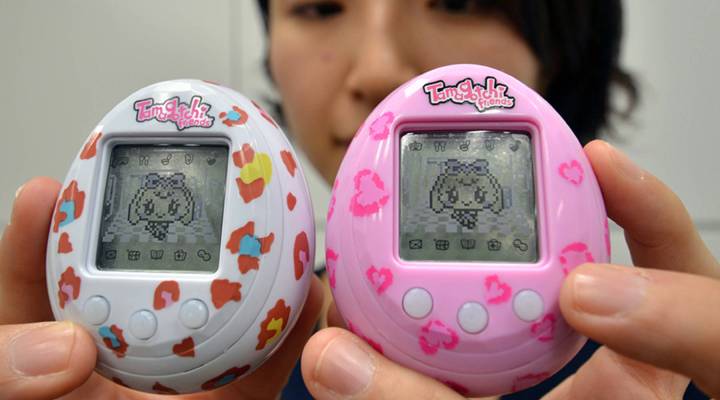 COPY
The egg-shaped Tamagotchi virtual pet is a toy fad from Christmas past. YOSHIKAZU TSUNO/AFP/Getty Images

You might remember the toy fads of Christmas past: Cabbage Patch Kids, Ty Beanie Babies, Tamagotchi, Teddy Ruxpin. These were toys that exploded in popularity — and filled our stockings — for many years.

With the holiday season upon us, what are kids expecting to unwrap this year? Knowing the answer to that question is Jackie Breyer’s specialty. As editor-in-chief of The Toy Insider, she studies what toys are especially coveted every year.

Lizzie O’Leary: Can you define what makes a toy a fad toy? Like what makes it grip the imagination?

Jackie Breyer: In my mind, a toy fad is something where a demand surpasses supply. Everyone’s gotta have it. They’ve got to have it now, especially during the holiday season. You can’t find it, you’re going crazy, parents are scrambling to make sure they get one for their kid.

O’Leary: Is it a product of like organic supply and demand? Or how much of this is companies, kind of, playing with the supply chain or the way things end up in a retailer?

Breyer: A lot of times, yes, the initial marketing factor can be a bit of a manufacturer’s kind of ploy to get things going. But in general when it comes to the actual supply, manufacturers do generally want there to be enough product so there’s not a lot of disappointed children for the holidays. And sometimes you just don’t see that fad coming out of left field, and you just can’t keep up.

O’Leary: Well that’s one of the things I wonder about — what are the characteristics that makes a great fad toy?

Breyer: In this day and age, a great fad toy, first of all, is seated online — social media, YouTube. Kids are seeing unboxing videos and they just have to have it. But the hot trends that we see are something that’s affordable for a kid with pocket change, you know, like collectibles are huge right now, the blind bags, the surprise packs. These are things that kids can bring with them to school, and they’re showing on the playground, and they’re trading their doubles — what we saw was Shopkins and now we’re seeing with L.O.L. Surprise! and things like that —

O’Leary: You’re like totally speaking a language I don’t even understand!

Breyer: It’s just the next big thing. I did bring some Fingerlings, if you want to —

O’Leary: Yeah, you brought things with you — so what did you bring?

Breyer: So Fingerlings are the hot toy of this holiday season. It’s a little monkey. They also have unicorns and sloths. So they’re these little monkeys that they wrap around your finger. I brought us each one! So they’re super cute and adorable. Kids love them. They’re $14.99 at retail so they’re affordable for most people. But you can’t really always find them. And people are buying online, they’re spending more than they should. You know that’s a concern for the manufacturer. That’s a concern for a lot of people.

Breyer: Well no because you can find — there’s so many different ways to find the product. You know when we were kids and our moms wanted to find us a Cabbage Patch they stood outside a Toys R Us till the truck came in and they pulled them off the pallets! And you know people still do that. But you can also buy one on eBay or on Amazon. There’s so many more inputs for a child today. Trends move faster now, just with the communication.

O’Leary: So it sounds sort of like the process has been democratized a little bit.

Breyer:  Yeah, I would say so. I mean I did bring — you mentioned the prices are lower. I do have some other fun things with me if you’d like to see.

Breyer: OK! So one of the biggest trends is collectibles and I brought a variety for you.

O’Leary: What is a collectible?

Breyer:  So a collectible is something, see this says right on it: “Collect them all.” I brought Squish Dee-Lish. So this encompasses two trends. One trend being kids love anything in blind packaging. If it’s a surprise and kids don’t know what it is, they have to have it. So I brought this for you to open. And it’s also a slow rising squishy toy, which is huge! Every kid has on their wishlist this holiday: a squishy toy.

O’Leary: OK I’m going to — give us a second — I want to open this thing. Squishy Dee-Lish, OK. Oh, it’s like a giant pink marshmallow!

O’Leary: Donuts! Yeah … it says donuts on it.

Breyer: I brought one that looks like French fries. Mine’s already opened here. But check it out, when you smush it — and then it slowly rises back to shape. So it’s almost like a stress ball for adults, but for kids — they’re obsessed. And also slime was a huge trend this year. I did bring you some slime as well. So the one I brought is called Slimy Gloop.

Breyer:  So for this one you could stick the unicorns. It comes with some glitter and some beads. So you’re really upping the whole tactile sensation. You know, you could kind of sit here and do your show and just squish slime all day.