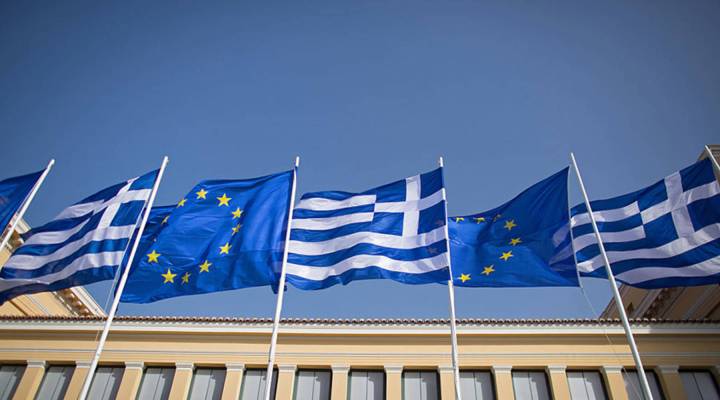 COPY
The Greek flag and the flag of the European Union fly above a government building in Athens, Greece. Matt Cardy/Getty Images

The Greek flag and the flag of the European Union fly above a government building in Athens, Greece. Matt Cardy/Getty Images
Listen Now

In his flower shop beneath the parliament building in central Athens, Spiros Kontogiannis fumed over the euro, which he blames for Greece’s economic misfortune and the loss of control over its own affairs. By adopting the single currency, he said, Greece has fallen humiliatingly under foreign domination.

“As a Greek citizen, I feel ashamed — and have done so since the crisis began — because our politicians now take their instructions from abroad. And our economy has suffered as a result” he said.

Euro membership allowed Greece to borrow heavily at low interest rates and then, when it ran into difficulty, it could not devalue its own currency to get out of trouble. The country’s eurozone partners, along with the International Monetary Fund, moved in and, in return for more, low-interest loans, demanded steep cuts in public spending. That austerity helped tip Greece into a deep recession, and over the past eight years, the economy has contracted by a quarter.

Spiros Kontogiannis runs a flower shop under the parliament building in Athens, Greece.

“I think the euro made Greece very, very poor and turned us into a colony, made us into something like slaves,” Kontogiannis said.

Most Greeks, however, still support euro membership. They recall the high inflation and economic turmoil under the old national currency — the drachma.

“I don’t want to go back to the drachma,” Christos Mavrou, a factory manager, told Marketplace. “The euro is much better. With the euro we have a stability, we have a safety net. The euro is a strong currency. We need it.”

Greece’s turbulent history — four centuries of Turkish oppression, a civil war and a military dictatorship — might well explain why many Greeks yearn for a safe haven.

Café owner Alekos Zandros is one of the many passionate supporters of EU membership.

“We love the European Union. We’re very thrilled to be EU members,” he said. “We would never consider following the British example and voting to leave. We feel disgust at the British. They should remain and fight for a better Europe, not run. They are cowards.”

Hardline Brexiters in the United Kingdom say the Greeks have been humiliated by the EU and should bail out now. But Greek writer Yannis Sarakatsanis said that would entail an even bigger humiliation.

“Leaving the euro is like being relegated,” Sarakatsanis said. “You go to the second league. You failed. You went with the big boys and you failed. That’s how I would feel about it. That’s the general feeling about it. Leaving would be a failure.”

But he conceded that Greece’s euro membership doesn’t look like a rip-roaring success.