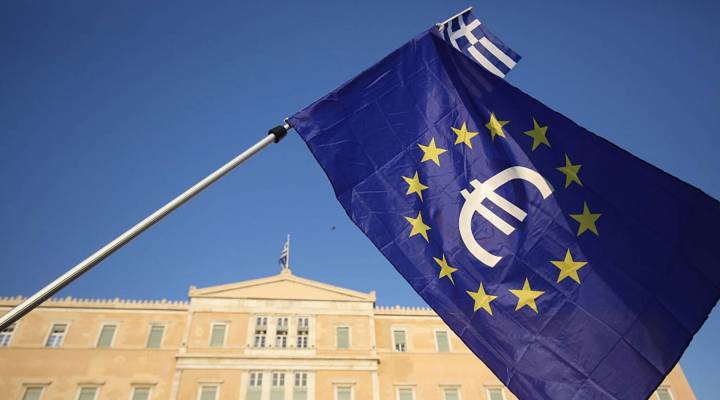 COPY
A European Union flag with the euro currency symbol waves in front to of the Greek Parliament in Athens, Greece. Christopher Furlong/Getty Images

A European Union flag with the euro currency symbol waves in front to of the Greek Parliament in Athens, Greece. Christopher Furlong/Getty Images
Listen Now

At the start of the Eurozone debt crisis, in 2010, British financial traders caused deep offense by labeling the five weakest countries in the currency bloc, Portugal, Italy, Ireland, Greece and Spain, with the insulting acronym “PIIGS.”

Today those countries have their revenge.

They’ve apparently defied the negative stereotype and are clocking up a healthy economic performance. The PIIGS might not be flying yet, but they certainly seem to be taking off:

“Europe has had a very good year to date and is genuinely recovering,” said Laura Foll of the Janus Henderson fund management group. “Unemployment has come down. Economic growth is looking better than expected.”

Among the most heavily indebted and bailed-out countries in the bloc, Spain is the star: It is growing at more than 3.5 percent per year. Even the zone’s financial pariah, Greece, has come in out of the cold and is basking in an unexpected glow of investor approval. Last week, for the first time in three years, the government in Athens offered its bonds for sale and it was inundated with bids.

“We see a bigger improvement in Ireland, and even Portugal is growing at a very healthy pace,” he said.

All this comes after seven years of crisis; after $380 billion of bailout money has been pumped into Greece alone; and after the bailed-out countries were compelled to cut their public spending and reform their economies, largely at the insistence of the German government.

“That tough love has certainly worked. These bailed-out countries are reaping the benefits of those reforms and cuts,” he told Marketplace. “The German government’s approach has been vindicated.”

Not all economists are saluting the Germans, however, nor are they all overly impressed by the latest rosy assessment of the bloc’s performance. Simon Tilford of the Centre for European Reform said the austerity program made matters worse in Greece, and that country has still not really rebounded.

“It’s gone through the biggest peacetime slump of any developed economy ever, and it’s yet to bounce back in any meaningful way,” he said.

Tilford argues that the recent Greek bond sale was a success only because the bonds carried a very high rate of interest. And he’s rather dismissive of the overall improvement in the eurozone.

“It’s very weak given the scale of the preceding slump. The eurozone economy is still only a little bit bigger than it was before the 2007 crisis. There’s a long, long way to go before people can start talking about recovery.”

Hardened critics of the euro, like Henry Newman of the Open Europe think tank, say that despite the growth spurt in the zone, the deep existential flaws remain. Newman doesn’t believe the single currency is sustainable “without much more political union.”

In other words: without a United States of Europe in which Germany shoulders the debts of its poorer partners.

German economist Florian Hense said that is unlikely to happen anytime soon, but he is far more optimistic about the long-term prospects for the euro; he insists the current upswing in the eurozone is genuine and gathering pace, and he points out that the bloc is now growing faster than the U.S., the first time that’s happened for many years.

So is the eurozone out of the woods? Is he calling the end of the debt crisis?