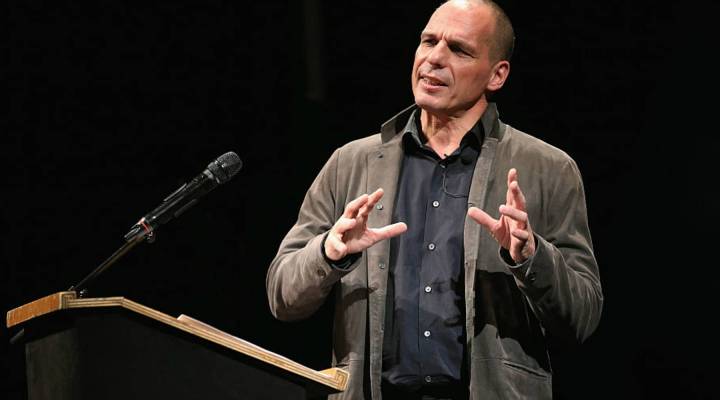 Former Greek Minister of Finance Yanis Varoufakis was likely the most high-profile figure during the Greek debt crisis. The economist resigned in the summer of 2015, following a tumultuous period.

He’s currently a professor of economics at the University of Athens, and recently released a book called,  “Adults in the Room: My Battle with the European and American Deep Establishment.”

He spoke with Marketplace Morning Report host David Brancaccio about how the story it tells is like a Greek or Shakespearean tragedy, and how Europe lacks a “moral union.” Below is an edited transcript of their conversation.

David Brancaccio: What do you think of what I would say is the conventional wisdom right now regarding the eurozone? Things are generally going quite well over there. We don’t have to worry about those guys much anymore.

Yanis Varoufakis: A regime’s incapacity to reproduce itself is evidenced at moments when the reality and the narrative about the reality becomes so huge. It’s very much like the early 1980s in the Soviet Union. The official version of the actual truth was so desperate, you knew the system could not reproduce itself. Europe now is in a situation where the numbers are prospering and people are suffering, with more than three and a half trillion of non-performing loans private and public. We’ve got a banking system that needs about one and a half trillion dollars to be properly capitalized and you have a political system which is absolutely buckled under its own hubris.

Brancaccio: Now the villains in your story are the forces that prioritized bondholders and big banks over the Greek population. But you also blame Greeks for getting into the mess in the first place. Are you seeing finally — it doesn’t sound like you are — structural changes in Greece that are possibly going to strengthen the country for the future?

Varoufakis: Well, we’re responsible for the fact that we were the first domino to fall. We were not responsible for the domino dynamic, which began in Greece and then ended up rendering, for instance, in Italy. Insolvent, in a sense. Structural reforms. What is a structural reform? Do you think that taking a pensioner who is living on $300 a month to $200 counts as a reform? This is confusing butchery with surgery.

Brancaccio: The austerity that we’ve reported so much about has not gone away if you go to Greece.

Varoufakis: It is actually getting deeper. But look, this is absolutely understandable because when you have a bankrupt state, bankrupt banks, bankrupt companies and bankrupt households, and everybody is pretending or we’re being forced to pretend that we can escape this bankruptcy through borrowing more, an 8 year old will tell you that our count won’t end well and this cycle — austerity leading to insolvency, insolvency creating more austerity and so on — this downward spiral cannot end on its own.

Brancaccio: In the book, there’s a crucial scene: You and one of the most powerful figures on the world stage, Germany’s finance minister Wolfgang Schaeuble. In the heat of negotiations, he says privately to you several times that he understands how agreeing to EU-ECB-IMF terms will be “bad for your people,” meaning Greek people. I thought that was interesting. He sees you as Greeks, not Europeans. Did you notice that? I mean the euro means that Greece can’t use its own central bank to get out of a desperate spot like a regular sovereign nation. Yet in this situation, it’s you, the Greeks.

Varoufakis: Well, imagine if in the United States you treated people from Arizona as non-Americans or as people that must fend for themselves and whose banking system is their own problem. Then you wouldn’t be having the United States of America.

Brancaccio: And that’s the conundrum that Europe is still in. It didn’t fix it.

Varoufakis: Indeed, we created the common currency, but did not create everything else which is necessary not to make the common currency a place of shared prosperity. But you mentioned Schaeuble. Let me just say one thing that I think matters about — this is the reason why I wrote the book. My book in a sense is a story about the powerlessness of the powerful. What he was actually saying to me at that moment — he was not happy saying this — was that he was powerless to do that which he himself understood to be the right thing. That’s why I think of my book as a tragedy, in the old ancient Greek or Shakespearean understanding of the word tragedy.

Brancaccio: Wolfgang Schaeuble, among the most powerful humans on this earth when it comes to finances, couldn’t do what he knew was right, is what you’re saying.

Varoufakis: And he was absolutely, utterly dejected — as dejected as I was. I didn’t write my book as a story of goodies and baddies, villains and the virtues. Everyone in my book is trying to do their best under circumstances not of their own choosing, circumstances of effectively forcing people like Schaeuble to do awful things in the name of exactly its opposite.

Brancaccio: Just so we know a piece of the story, what did the finance minister of Germany want to do but his chancellor wouldn’t let them do?

Varoufakis: Wolfgang Schaeuble, decades ago, was a committed federalist, but a combination of Angela Merkel — who usurped him and effectively stole, that’s in his view, the prime ministership, the chancellorship from him, as well as the French, did not want a proper federation.

They wanted all the benefits from a common currency, but without the obligations of a federal democratic political system. Schaeuble was against that. But over the years, he became a cynical man, using the finance ministry to do that which he would have wanted to do as the chancellor of Germany. And his No. 1 priority became to tame Paris. His argument was very simple: “They want our money.” That’s how he conceives the euro — as a Deutsche mark. “I will have to have control over the national budget. It’s very, very simple.” And Greece was collateral damage. He said this explicitly to me: “How can I let you off the hook? What will the French think?”

Brancaccio: To tame Paris, to tame the French — the other power center.

Varoufakis: That’s a point that you mentioned before — when you treat one European people as expendable and as collateral damage in a kind of war, a dirty war against another large country like France, effectively you’re condemning Europe to constant fragmentation and disintegration at the economic, financial and moral level.

Brancaccio: Now you’re a proud left-winger. And I note the subtitle of your book: “My Battle with the European and American Deep Establishment.” That echoes a phrase that the American right-wing likes to use. The deep state, the apparatchiks in government, as they see them, who thwart real reform. Is this deep state, deep establishment one of the examples of the left and the right looping back around and meeting?

Varoufakis: There is a profound difference, of course. As you know very well, at your own cost these days, in this country is that the right only wanted to penetrate the deep establishment  in order to take it over and to use it for its own purposes. We leftists, as humanists, want to dissolve it and we want a genuine democracy.

Brancaccio: So profound difference is what you’re telling me.