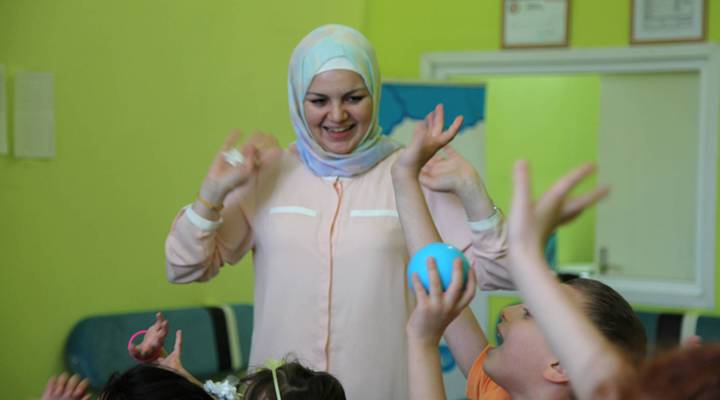 COPY
After struggling to find work as an engineer, Dania Abdulbaqi opened a daycare in Gaziantep, Turkey. Courtesy of Mahmoud Al Basha

After struggling to find work as an engineer, Dania Abdulbaqi opened a daycare in Gaziantep, Turkey. Courtesy of Mahmoud Al Basha
Listen Now

Before the civil war broke out in Syria, 34-year-old Dania Abdulbaqi held a good job in a quiet office. For five years, she drafted blueprints and solved problems as a civil engineer.

Today, as a Syrian refugee living in Turkey, her work is far from quiet. When you walk into the front door of her office building, a loud, jolly tune greets you and, inside, little kids shout popular American and Turkish nursery rhymes.

Abdulbaqi owns and runs a daycare, Dunya Alkhayal – which translates to “Wonder World.” Her business is situated in a bustling neighborhood of Gaziantep, a Turkish city of roughly two million people, located just an hour from the Syria-Turkey border.

Despite her love for children, reciting nursery rhymes and retying messy ponytails is not exactly what Abdulbaqi expected to be doing with her career.

“My dream was to stay in the engineering field,” she said in Arabic. “From day one, I loved engineering.”

Abdulbaqi is among more than 3.5 million Syrian refugees who’ve crossed the border into Turkey to escape the civil war in their country. Syrians now make up more than five percent of Turkey’s population, most of them living in cities near the border and in Istanbul.

Abdulbaqi, who’s from Hama, Syria, fled her home in 2012. She searched for months for an engineering job in Turkey, but like hundreds of thousands of other Syrian professionals, she couldn’t find formal work in a country with different rules and a different language. Eventually, she enrolled in Turkish classes, which meant enrolling her two little boys in daycare.

“It was our first experience to put our kids at some foreigner place,” said Abdulbaqi’s husband, Ahmad Bouchi.

Bouchi, also a former engineer who know works at a Syrian nonprofit, said it didn’t help that when he would call the daycare to check up on their kids, no one answered.

“I was very worried about them,” Abdulbaqi said. “I didn’t feel a sense of security — that’s why I decided to build this place.”

With financial help from family and friends, Ahmad Bouchi and his wife spent eight months converting an old Turkish restaurant into a bright daycare.

That was Abdulbaqi’s aha moment. She and Bouchi decided they would open their own daycare in Gaziantep where one out of every four people is from Syria.

Today, the city’s streets are filled with Syrian-owned shawarma restaurants, groceries and other businesses that have sprung up to cater the growing refugee community.

While the official numbers are hard to come by, economists estimate that Syrians have opened more than 10,000 businesses in Turkey. And they’re creating jobs – according to the nonprofit Building Markets, Syrian entrepreneurs on average employ nine people.

Many Syrians choose to partner with Turkish residents to help them navigate complicated business regulations. Abdulbaqi and Bouchi chose to work with a translator who explained that Turkey doesn’t allow refugees to open schools or daycares. So, they found a loophole and registered their business as a children’s library instead.

Then, they needed money. Bouchi said they turned to family and friends.

“You ask them to believe in you — to invest their money with you,” he said. “So, it was hard for us.”

But they pulled together $20,000, rented an old Turkish restaurant, and Abdulbaqi got to work transforming it into Wonder World. She obsessed over every detail, especially when it came to the bridge — Abdulbaqi’s masterwork of engineering at the entry to the daycare.

She explained how she spent months getting the dimensions just right, making sure the slats on the railing were close enough so little heads couldn’t get stuck, and that the arch was steep enough to keep tiny kids from heading out the door.

Dania Abdulbaqi put her engineering knowledge to use and spent months crafting a children’s bridge.

“Only one family showed up,” she said with a chuckle.

Her husband immediately hit the streets, stopping every mom and child he could, pointing in the direction of the new daycare. Abdulbaqi thought discounts were the answer. She would call her husband every day to ask him.

It took a while, but word got around. Now, two years later, there are 40 families at Wonder World, most of them Syrian.

Still, Bouchi said the business barely makes a profit, and the lira crisis isn’t making things easier. They pay their rent in euros, so the more the lira depreciates, the higher the rent goes.

But during work hours, Abdulbaqi doesn’t have time to worry about that – she’s busy chasing around toddlers and corralling them into circles to sing songs. Among the kids are her two sons.

She said her children and the ones she looks after may never know Syria the way she did. So, she teaches them in stories and songs.

“My land has been set on fire,” the kids sing in unison. “Give us peace. Give us our childhood.”