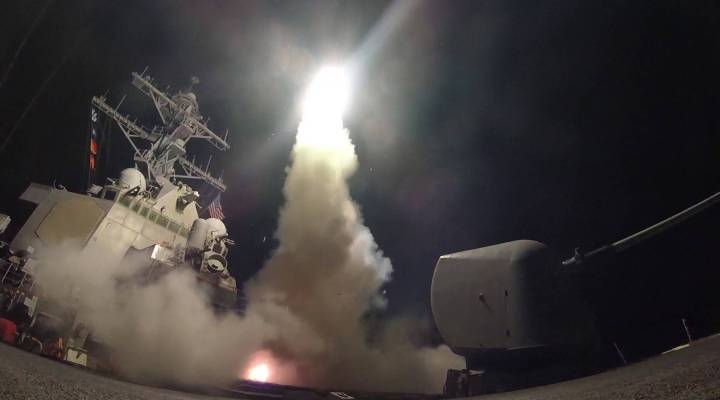 In this handout provided by the U.S. Navy, the guided-missile destroyer USS Porter fires a Tomahawk land attack missile on April 7, 2017 in the Mediterranean Sea. The USS Porter was one of two destroyers that fired a total of 59 cruise missiles at a Syrian military airfield in retaliation for a chemical attack that killed scores of civilians this week. The attack was the first direct U.S. assault on Syria and the government of President Bashar al-Assad in the six-year war there. Ford Williams/U.S. Navy via Getty Images

In this handout provided by the U.S. Navy, the guided-missile destroyer USS Porter fires a Tomahawk land attack missile on April 7, 2017 in the Mediterranean Sea. The USS Porter was one of two destroyers that fired a total of 59 cruise missiles at a Syrian military airfield in retaliation for a chemical attack that killed scores of civilians this week. The attack was the first direct U.S. assault on Syria and the government of President Bashar al-Assad in the six-year war there. Ford Williams/U.S. Navy via Getty Images

BEIRUT (AP) – The Latest on events in Syria (all times local):

Lebanon’s militant Hezbollah group says the U.S. missile attack on a Syrian air base is “a new crime” by the American administration that will increase tensions in the Middle East.

Hezbollah warned in a statement Friday that this “foolish step by the Trump administration will be the beginning of a great and dangerous escalation in the region.”

Hezbollah, which sent thousands of its fighters to Syria to back President Bashar Assad’s forces, said the missile attack will complicate the situation worldwide.

Syrian state TV says opposition fighters have fired shells at a government-controlled neighborhood of the capital Damascus killing one person and wounding 20.

The TV says Friday’s shelling of the Jaramana district occurred in the afternoon.

The attack on the capital came at a time when opposition activists reported airstrikes north of the country.

Hundreds of protesters performed a funeral prayer in Istanbul for the victims of the Syrian regime’s chemical attack on Khan Sheikhoun.

Ahmet Camurluoglu, the head of Istanbul Platform consisting of Islamic-leaning NGOs, blamed the west for the creation of chemical weapons used in Syria. “In this massacre, imperialist West, especially Russia, the U.S. and Iran are accomplices of cruel Assad,” he said.

Calling the U.S. “the great devil,” Camurluoglu said the country “can’t escape the curse of hundreds of martyrs with a few bombs,” referring to the U.S. missile strikes.

The overnight strikes in Syria represent the first major military action of Donald Trump’s presidency, and is the first time the U.S. has directly targeted the regime of Syrian president Bashar al-Assad since the start of the country’s grinding civil war.

The U.S. military fired dozens of Tomahawk missiles at the Shayrat air base in eastern Syria in response to a chemical weapons attack President Trump blamed on the Syrian government.

Here’s more on the missiles used in the strike.

Russia and Iran, Syria’s primary allies and military supporters in this conflict, reacted strongly to the news of the American strike, with Russia suspending an agreement with the U.S. that encouraged communication about movements of Russian and American planes in Syria.

Thursday’s airstrikes represent a stark departure from President Trump’s campaign rhetoric about involvement in the Middle East. During the first presidential debate in September 2016, he indicated he would prefer to take the trillions America spends on Iraq and Afghanistan and spend it on U.S. infrastructure instead.

Here’s how much the United States has spent on recent conflicts in the Middle East.

President Trump called for $54 billion in increased defense spending in his “skinny” budget blueprint released last month. The U.S. is already fighting the Islamic State in Syria, and the Department of Defense is requesting almost $10 billion for those operations in FY17.

Horrific images of what was reportedly a chemical weapons attack prompted Trump to order the strikes, with the President describing the attack as “…a slow and brutal death for so many.  Even beautiful babies were cruelly murdered in this very barbaric attack.  No child of God should ever suffer such horror.”

Aid groups that support emergency response and humanitarian aid in Syria and for the refugees that flee the war there have criticized the Trump administration for planned cuts to foreign aid and stricter rules for Syrian refugees trying to enter the United States.