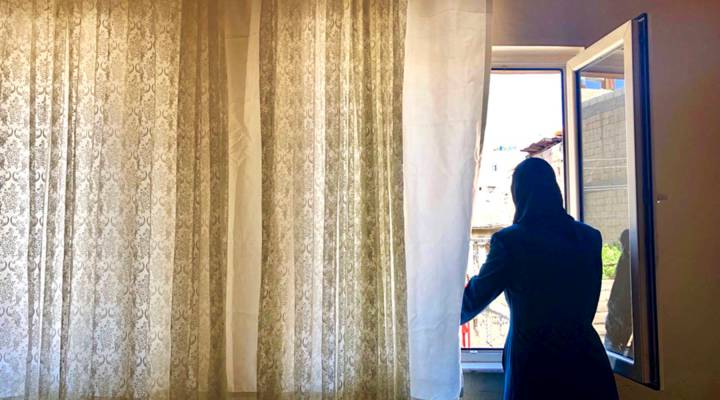 COPY
Amna Hafez never expected to work, but she didn’t want her daughters to feel the financial impact of their father’s death. Courtesy of Sumaya Alkhooly

Amna Hafez never expected to work, but she didn’t want her daughters to feel the financial impact of their father’s death. Courtesy of Sumaya Alkhooly
Listen Now

Amna Hafez will never forget her first day at her first real job. As a 34-year-old Syrian refugee in a new country, she insisted that her mom come with her, and immediately things went south.

“We got lost on the way there,” she said in Arabic.

As newcomers in Turkey, Hafez and her mom didn’t understand the bus system, so they walked instead. Hafez was an hour late and her boss, also a Syrian refugee, was not sympathetic.

“He said ‘don’t be late again or tell me that you got lost,’” she said. “So, the next day I gathered up all of my strength and when I got to work on time, I felt so relieved.”

Hafez is among the more than 3.5 million Syrians who’ve fled to Turkey since the Syrian revolution broke out in 2011. She settled in Gaziantep, a large city near the Turkey-Syria border where one out of four residents are now Syrian.

Her job, serving tea and cleaning the offices of a small nonprofit, was easy enough. The hard part was being in an office environment. For the first few months, she was too shy to even look people in the eye, she said.

Back in Syria, Hafez had stayed home with her two girls, while her husband went to work as a baker. But when the government bombing started in Aleppo, she fled and her husband stayed to fight. She found out later – on TV – that he was killed, leaving Hafez a widow in a foreign country where she didn’t speak the language.

“Never in my life did I think I’d work,” she said. “But I didn’t want my daughters to have to rely on anyone else or to feel like something was missing without a father around.”

It’s been two years since that scary first day of work, she explained as she swept the office kitchen and washed the dishes.

“I’m so happy to work and the most important thing for me is that I’m not dependent on anyone’s help,” she said. “I can take care of myself.”

She said her 11-year-old daughter, Maryam, calls her multiple times throughout the workday, especially during the summertime. “She’ll always say, ‘When are you coming home? You’re late. I’m bored.’”

While she feels guilty for not being home more, Hafez said she knows she’s one of the lucky ones.

She’s among thousands of Syrian women in Turkey who’ve lost their husbands and have been left to carry the weight of their families. For those with little education and skills, working in Turkey’s informal economy is often the only option, making them more vulnerable to tough working conditions and low pay.

Along with supporting her daughter, siblings and mother, Hafez looks after her father.

Hafez got her job with the help of a local NGO that supports Syrian women like her. She makes $500 a month; because she gets paid in dollars instead of lira, her paycheck goes farther than most people in her position.

“That was the first time I ever got paid $500,” she said. “I didn’t even know what $500 meant. Right away, I took my daughters to the mall. I bought them food and they pushed the cart. It was their first time ever pushing a cart, and they got so excited.”

She gave half of her first paycheck to her mom, who she lives with. They share an apartment with Hafez’s youngest daughter, her dad, her three brothers and two of their wives. Their apartment is tidy and simple – black speckled cushions are spread out in the living room and at night they’re pulled together as beds.

In Aleppo, Hafez and her siblings had their own apartments.

“There was no better life than before,” her mom said in Arabic. “We wish we can return to that life, but it won’t come back.”

Hafez’s favorite memory of Aleppo is sitting on the roof of her apartment building with her family, staring at the night’s sky. They would stay up all night, playing card games and drinking tea, she said.

Those nights came to an end after government airstrikes reached Aleppo; terrified that her apartment would collapse, Hafez would wake her two daughters up in the middle of the night and hide them behind a bathroom door. It took months before her daughters stopped mistaking thunder in Turkey for bombings.

When they first arrived in Gaziantep – after spending almost all their money on smuggling fees – Hafez would spend her days outside a mosque, begging for bread. Eventually, she found work, sewing clothes in her home for a couple dollars a day.

Even though she earns a lot more now, Hafez said it’s not enough to support her whole family. Her brothers work seasonal textile jobs, so they’re unemployed a lot of the time. One of her brothers, Mohammad, said he keeps busy watching old horror movies; the Chuckie franchise is his favorite.

Hafez’s job at a local nonprofit in Gaziantep, Turkey includes serving coffee and cleaning the offices.

He also makes frequent visits to the doctor, which Hafez pays for. He and his wife have been trying to conceive for over a year now.

In the room next to Mohammad’s, Hafez shares a room with her mom and 11-year-old daughter, Maryam. Wearing a jeweled jean jacket and bright purple headscarf, her daughter explained that she wants to be a doctor when she grows up.

“I want to help kids,” she said with a smile, showing off her bright green braces.

Hafez said she wants Maryam to go to college; she regrets that her older daughter never finished middle school and got married young, at age sixteen. She said she doesn’t want Maryam to be consumed with worries, like her.

“I worry a lot about what would happen if I lost my job,” Hafez said. “How would I survive? Where would I work?”

Her fears often make it hard to fall asleep, she said. But she’ll still get up early — to make sure she’s not late for work.