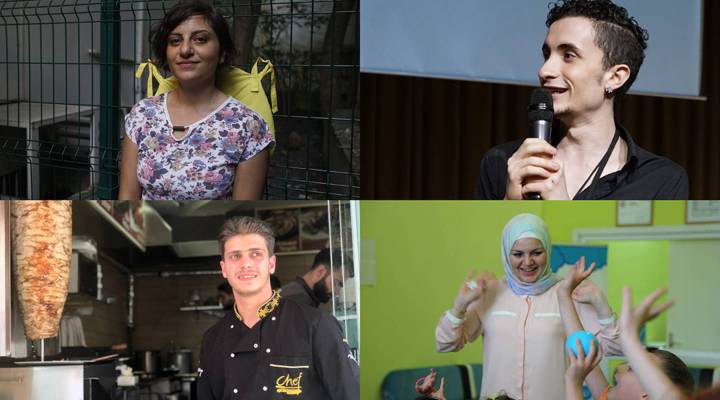 More Syrian refugees live in Turkey than in any other country. Since the conflict broke out in 2011, more than 3.5 million Syrians have found refuge in their neighboring country. Most Syrians live in large Turkish cities, like Istanbul and Gaziantep, making up nearly 5 percent of the country’s overall population. We asked Syrians who’ve had to rebuild their lives in Turkey: Where did you think you’d be at this point in your life, and where are you now?

Mahmoud Jarkis was in his second year of college, studying math, when the Syrian conflict broke out. He never finished college; instead, he fled to Istanbul. Today, he works as a manager at a Syrian-owned shawarma shop and studies Turkish part time, so he can eventually go back to school. “At this point in my life, I would be finishing my Ph.D. in mathematics. That’s what a lot of my former classmates are doing. But instead, I got married and had a kid. I figured that my future was gone, so why not build a family and invest in my children instead? Unfortunately, I got divorced seven months ago.”

If there’s one thing Badr Olabi knows, it’s coffee. For decades, his family ran a successful coffee chain in Aleppo, Syria. The business was so popular that he’d try convincing his teachers to give him extra credit in exchange for free coffee. After government forces destroyed his home, his family fled to Gaziantep, where they transferred their company. Instead of going to college, Olabi helped his family rebuild the coffee chain in Turkey. “I would rather not work with my family, but I’m forced to because of the situation. My dad, who’s my boss, is always telling me what to do and what not to do. He treats me like a kid. I’m not sure what I would’ve studied, but I love computers and have always been really good with them.”

Back in Syria, Dania Abdulbaqi worked as a civil engineer, designing mostly commercial buildings. When she and her husband fled to Gaziantep in 2014, Abdulbaqi struggled to find work since she didn’t know Turkish. That’s when she and her husband decided to build a business instead. With help from friends, they opened a day care center, mostly for other Syrian families. “On the day we opened, only one family showed up, and today we have more than 40 children. My specialty is very far from this kind of work; my goal was to continue working as a civil engineer and to open a business in Syria. But, at least with this work, I can spend more time with my two kids.”

Back in Damascus, Syria, Ahmed Mardini worked in a family business selling home decor and mosaics. That was always the plan — to work with his brothers and continue expanding the company. “The first day I came to Istanbul, I thought I’d be here for a month or two — three at most — and then go back to Syria. Then seven months passed, and I realized I’m not going to return. So I opened this sweets shop. I used to eat so many sweets, until I got fat. Now I don’t touch them.”

Othman Nahhas was just 17 years old when he left Syria to avoid being drafted into the military. He went to Belgium, where he discovered stand-up comedy and began studying computer science. Eventually, he dropped out of school to help support his parents, who fled to Turkey. That’s when he decided to pursue comedy and acting full time, pulling material from his experiences as a Syrian refugee. After his first comedy routine in Belgium, Nahhas remembers thinking: “I found the thing that most people look for; I think I found why I’m here on earth. Until this day, doing stand-up is my favorite thing to do. I would give up anything for stand-up — literally anything.”

For 14 years, Reem Safwan worked as an English high school teacher in the suburbs of Damascus. She joked that students wouldn’t take her seriously because she looked so young. In 2014, after protesting the Syrian government, Safwan fled and found refuge in Gaziantep. She hasn’t had luck finding a job as an English teacher in Turkey — the demand just isn’t there, she said. Instead, she works with a local nongovernmental organization, providing help to those who are internally displaced in Syria. “My beautiful dream has always been to live in the United States and to teach English there. Nowadays, I’d love to travel and teach in Britain, France and Canada. I haven’t been to any of those places — just in my dreams.”

Dana Bakdounes never finished college in Syria. She was studying economics, in the middle of her second year, when the conflict broke out. Seeking safety, she fled to Istanbul, where she found odd jobs to pay the rent. Eventually, her mom joined her in Turkey and insisted she return to school. “My mom sold her gold and jewelry so I could go back to college. She really wanted me to get a degree. But I decided that I wasn’t going to continue studying economics because business isn’t really my thing. I’m more artsy, so I’m studying architecture now. I’m not sure how we’re going to pay for the rest of college — my mom thought I’d get high grades and get a scholarship, but it doesn’t work like that here.”