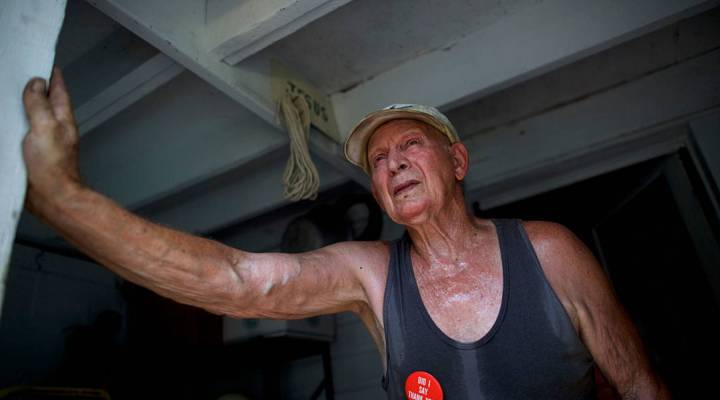 COPY
Nick Dindash, 78, who supports Donald Trump, poses for a portrait at his home back on Aug. 13, 2016 in Windber, Pennsylvania. The small Western Pennsylvania town of just over 4,000 residents was founded as a company town for nearby coal mines, most of which have closed. Mark Makela/Getty Images

Nick Dindash, 78, who supports Donald Trump, poses for a portrait at his home back on Aug. 13, 2016 in Windber, Pennsylvania. The small Western Pennsylvania town of just over 4,000 residents was founded as a company town for nearby coal mines, most of which have closed. Mark Makela/Getty Images
Listen Now

Many red-county voters who backed Donald Trump in the presidential race did so with the expectation that his leadership would lead to more jobs in their areas. However, a new analysis from the Associated Press has found that most (58.5 percent) of the job gains we’ve seen this year have been happening in counties that voted for Hillary Clinton in 2016. Josh Boak, an economics writer for the Associated Press, helped put the report together. He spoke with us about job growth trends and whether or not those Trump voters are frustrated with how the job market is unfolding for them. Below is an edited transcript.

I’m thinking that some of this growth must be that cities tended to go for Clinton, and cities have attracted jobs?

That is true. A lot of the job gains that have happened in this country have happened in places like Texas. And the cities and counties in Texas voted for Clinton whereas the other part of the state voted for Trump. But we see in many Trump counties, he talks about the forgotten man, he’d bring back factory jobs, that kind of thing via his tax cuts and his approaches on international trade. And that turnaround just hasn’t occurred. Now, what’s important about this is that his voters aren’t too concerned because they’re focused more and more on cultural issues like immigration and guns.

You went to Trump country in Pennsylvania, and you asked how people are feeling given some of these trends?

I love going there. I have family originally from Western Pennsylvania. We went to a place called Beaver County. Beaver County is this interesting place because it’s been losing population since roughly the 1980s, when the steel mills closed. It’s getting older as a county. And when you talk to employers, what they say is we have job openings, but we don’t have the population to fill them. So as a result, we’re losing jobs and the tax cuts don’t make a difference. They’re not changing that trend so far.

So there you are in Beaver County and you’re asking, “So you’re not seeing the jobs that might have been promised here.” Are people grumpy about the president?

No, not really. I spoke to the chair of the GOP party in Beaver County and I said, “What’s the most important issue for your members right now?” And he said, without hesitation, “Second Amendment issues.” Immigration is this interesting dividing line in this part of the country. Beaver County really got its economic start via immigration in the early 1900s for the steel mills. And yet immigration slowed, it lost population, and you speak to business owners there – and you even speak to the incumbent congressman, Representative Keith Rothfus, about what needs to change – and he’ll say, “We need immigrants.” And yet, within weeks of our conversation he voted for a bill that would have restricted immigration in the name of border security. This is one of the tensions we’re going to see in Trump counties.