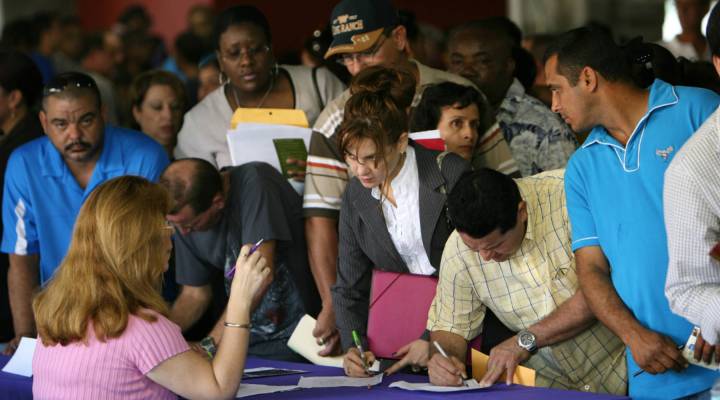 U.S. employers went on a hiring binge in February, adding 313,000 jobs, the most in any month since July 2016, and drawing hundreds of thousands of people into the job market.

The Labor Department said wage gains, meanwhile, fell from January to 2.6 percent year-over-year. Strong hourly wage growth had spooked markets last month because it raised the specter of inflation. But January’s figure was revised one-tenth of a point lower to 2.8 percent.

The influx of new workers kept the unemployment rate unchanged at 4.1 percent.

The surge of job gains may reflect, in part, confidence among some businesses that the Trump administration’s tax cuts will accelerate growth. Consumers are also benefiting from higher after-tax income, which grew last month at the fastest pace in a year, aided by the tax cuts.

In the meantime, economists are calculating how the Trump administration’s decision Friday to impose a 25 percent tariff on steel imports and a 10 percent tariff on aluminum might affect the job market. The Trade Partnership, a consulting firm, estimates that the tariffs will eliminate roughly 145,000 jobs.

Steel and aluminum producers would hire more people. But the gains would be more than offset, the firm calculates, by sharp losses among companies that use the metals, such as automakers, packaged food companies and those that make industrial machinery.

During 2017, the stock market, as measured by the S&P 500 index, surged 19 percent, partly on anticipation of corporate and individual tax cuts. Yet barely a month after the tax cuts became law, investors shifted their focus to the potential consequences: Faster growth that might intensify inflation and lead the Fed to accelerate its rate hikes.

There have been some signs that price pressures are picking up. But overall, inflation remains in check. The inflation gauge that the Fed tends to monitor most closely shows an increase of just 1.7 percent from a year earlier, below the central bank’s 2 percent target level.

Most economists expect growth to pick up in the coming months and to accelerate inflation slightly by year’s end. They have forecast that the economy will expand at just a 2 percent annual rate in the January-March quarter before topping 3 percent in the next two quarters.

For now, consumers have pulled back somewhat on spending despite income gains, thereby setting the stage for potentially stronger spending gains in coming months. After-tax incomes in January — which include benefit payments from the government and business income as well as wages — climbed by the most in a year. They were boosted, in part, by the Trump administration’s tax cuts and company bonuses that were paid out in response to corporate tax cuts.

And manufacturers expanded at the fastest pace in nearly 14 years in February, according to a survey of purchasing managers.

The housing market, too, remains generally solid, with demand for homes strong in much of the country, though rising mortgage rates may begin to slow sales.