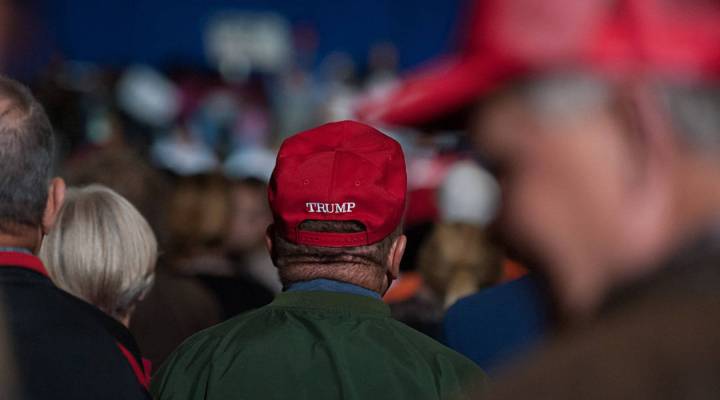 COPY
Supporters listen to Donald Trump speak at a rally at the Spire Institute in Geneva, Ohio, during a campaign stop. Jeff Swensen/Getty Images

Supporters listen to Donald Trump speak at a rally at the Spire Institute in Geneva, Ohio, during a campaign stop. Jeff Swensen/Getty Images
Listen Now

We are in the longest economic recovery in American history. The U.S. has added 15 million jobs since 2010. The unemployment rate is down to 4.9 percent. Median household income rose 5.2 percent in 2015.

And yet this election was decided in part because Donald Trump was able to tap into a deeply felt sense that things are not going well in this economy of ours.

So how is it we have this divide? Where does it come from?

Take the example of Steve Staub, owner of Staub manufacturing in Dayton, Ohio (which went for Trump).

“The average person I know here in industrial-based, Dayton, Ohio, isn’t doing as well as they feel they could be doing,” he said. Dayton’s unemployment rate is 5.5 percent, slightly above the national average, but not terrible. And Staub himself is doing OK. The great recession almost put him out of business but he’s back with higher sales than ever, though slightly fewer workers.

“I know a lot of people struggling to put food on the table every day. We’ve got so many people underemployed. We still got machinists working at fast food restaurants,” he said. Staub is also painfully aware of long-term trends in the U.S. economy. “Carrier air conditioner, just an hour from me, is closing down their plant and moving that plant to Mexico.”

Staub is skeptical of economic data from the Bureau of Labor Statistics, citing Trump’s statements that the unemployment rate had been manipulated and the real unemployment rate was in the teens. But Trump’s peddling of fabricated economic data does not diminish Staub’s very real complaints, which start to get at the divide between data and economic anxiety among certain quarters.

In part, this is because Staub’s concerns aren’t necessarily captured in top-line data, like the unemployment rate.

“Even though there’s been growth, the growth has been uneven,” said Paul Gronke, professor of political science at Reed College. Incomes have risen at both the low and the high end of the spectrum, but “there’s been a much more dramatic bump in income among higher-income groups.”

The growth has been uneven geographically as well.

“I grew up in Chicago-area suburbs. I remember the river towns along  Illinois, Missouri, Iowa being thriving, fun communities. We’d stop there with my dad and family,” Gronke said. “And I was driving through these towns last summer, and they’d just been hollowed out, yet you cross into the farming areas and the farming areas are doing fairly well.”

Another trend that may explain the well of discontent that Trump successfully tapped into is the shrinking of the middle class.

“The highest and lowest income groups have gotten bigger while the middle income group has gotten smaller,” said Kim Parker, director of social trends research at the Pew Research Center. “Incomes at the middle have stagnated.”

Parker said there is a clear demographic that has not been able to benefit from the growth the country has seen: unskilled, uneducated workers.

“Education just came out to be a huge dividing line for workers and American adults more generally,” Parker said. Pew analyzed the changing skills requirement of the job market and found that “workers with higher levels of education are more likely to be employed in occupations that require high levels of social and analytical skills, but at the other extreme we found more than half of the adults with high school diploma or less work in occupations that require high physical skills or manual skills, and those are the jobs where wages have been stagnant or declining and opportunities have been much more limited.”

This is precisely the group that Trump has cultivated and promised to champion in this election.