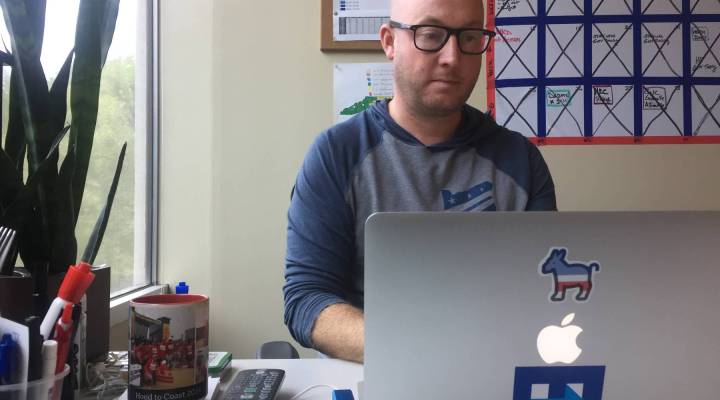 COPY
Dan Kanninen, the Clinton campaign’s top adviser in NC, said the campaign opened its first field offices in April and currently has more than 30 throughout the state. Reema Khrais/Marketplace

Dan Kanninen, the Clinton campaign’s top adviser in NC, said the campaign opened its first field offices in April and currently has more than 30 throughout the state. Reema Khrais/Marketplace
Listen Now

Earlier this month, Kelly Hollis received a glossy advertisement in the mail that surprised her. It was an ad supporting Hillary Clinton for president.

“As a registered Republican, I never get marketing materials from the Democratic party,” she explained.

Hollis probably got that ad because after the first presidential debate, she felt so infuriated by Donald Trump that she signed up online to support Clinton.

“I wasn’t a fan of Hillary Clinton, but when I realized that was my only option, a protest didn’t sit well with me,” she explained.

It’s not just Trump’s character that turns Hollis off. She said his policies on immigration, taxes and trade will hurt the economy.

Kelly Hollis, a registered Republican, said she plans to change her party identification to independent.

Voters like Hollis, who are white and college educated, have long been the Republican Party’s winning formula in North Carolina. They went for Bush, McCain and Romney by wide margins. In 2012, 70 percent of college-educated white voters backed Romney.

But a recent poll from CNN/ORC shows that’s nearly flipped. About 60 percent of those voters said they plan to back Clinton.

If Clinton carries white, educated voters, she’d be the first Democrat to do so in more than half a century.

In North Carolina, the Clinton campaign has three times as many field offices as Trump and has collected reams of data it can use to target those white, college-educated voters.

The campaign and its supporters will have blanketed the state with an estimated $22 million worth in ads by Election Day. The Trump campaign still lags far behind in ad spending, but has moved more staff to the state. Both candidates said they plan to visit the state after the third debate.

“NC is in play in part because of a lot of the demographics changes that have made it a different state than it was four years ago, or four years before that,” Kanninen said.

With one of the fastest-growing economies in the country, the state has become a magnet for young, well-educated workers who are flocking to cities like Charlotte and Raleigh for jobs in banking, tech and research.

Since 2010, about half of North Carolina’s growth has happened in Wake and Mecklenburg counties, which are home to Raleigh and Charlotte, Tippett said. People often joke that Cary, a city near Raleigh, stands for “Containment Area for Relocated Yankees.”

At a bar in Cary, David Kalbfleisch said he moved to North Carolina in January from Boston.

“Cause it’s easy to get a software job here,” he said. “And I grew up in Kentucky, so this is a lot like my hometown of Louisville with a much better economy.”

Kalbfleisch said he dislikes both Trump and Clinton, and may not even vote for president. His friend, Molly Miles, also moved to North Carolina for a tech job. The 28-year-old said she comes from a Republican family that’s “very conservative” and holds “Christian values.”

Miles remembers when she was in second grade and supported Bill Clinton as part of a school assignment.

“And my mom was like ‘No!’ We had, like, a talk about how that was not OK, and we don’t vote for Democrats because they reward lazy people,” she said.

These days, her mom bombards her on social media instead.

“There’s definitely been a lot of ‘Yay Trump’ Facebook posts,” said Miles, who just deletes them.

Miles, who’s voted for Republican presidential candidates in the past, said she’s registering as an independent. And so is Hollis.

The mother of two plans to change her identification from Republican to independent.

If Clinton keeps her hold on people like Hollis and Miles, she just may score a rare victory among white, college-educated voters in this southern swing state.