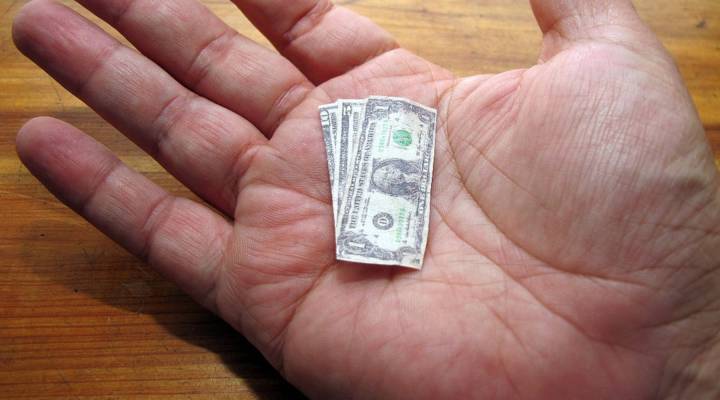 It’s been a year.

A long year, both in this economy and in the campaign.

Last October, Marketplace launched our first-ever national economic survey, the Marketplace-Edison Research Poll. We did it so that we could find out and track — over time — how people are feeling about the economy all through this election year and heading into the voting booth. And find out we did.

Over the past year, we’ve learned about the economic things that keep Americans up at night. (Thirty-nine percent of us lose sleep over our finances — 11 percentage points higher than it was a year ago).

We’ve learned that 28 percent of Americans are afraid of not being able to pay their mortgages — that’s up from 10 percent a year ago.

And we’ve learned that almost half of all Americans with full- or part-time jobs – 48 percent — say they’re working “just a job” and not part of a career development path.

There’s way more in there:

The steep jump in our Economic Anxiety Index in the past year. What Americans think makes a “good” job. How much we trust — or don’t — government economic statistics, like the unemployment rate. The sharp differences in how Trump voters and Clinton voters see the economy.

Today we’re releasing the fourth and final wave of our survey — the last real snapshot of how Americans are feeling about this economy in the countdown to Election Day.

There’s lots of good data in there — dig in.

Using responses to the Marketplace-Edison Research Poll, Marketplace and Edison Research created the Economic Anxiety Index ®, a number on a scale from 0-100 that is calculated from answers to a battery of questions. The Economic Anxiety Index ® describes just how stressed out people feel about their personal financial situation. The higher the number, the more economic stress someone is feeling.

Is the economy rigged in favor of certain groups? A majority of Americans, 62 percent, think it is. Majorities of all demographic groups agree, including Democrats, Republicans, Independents and all income levels.

There is consensus as to whom the economy is rigged to benefit. A majority of respondents who think the economy is rigged agree — it is rigged for the rich, politicians, banks and bank executives, and corporations. However, supporters of Hillary Clinton and Donald Trump differ dramatically on how the rigged economic system is benefiting other subgroups.

Dissatisfaction with the current candidates for president has steadily increased over the past year as the nominees have emerged from the primaries and the general election has taken shape.

The data was weighted to match the most recent United States population estimates from the U.S. Census Bureau for age, gender, race and region of the country.