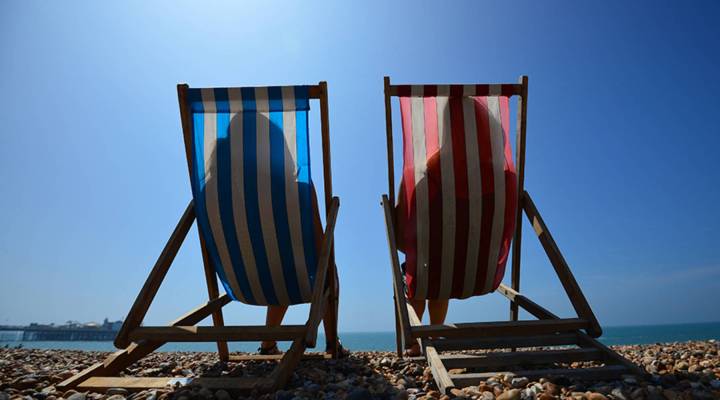 COPY
CARL COURT/AFP/Getty Images
Brought to You By

Note: This story was first published in July 2018

The song featured Justin Bieber, Quavo, Chance the Rapper, and Lil Wayne. In the music video, they’re at a mansion hanging by the pool. Bieber is in a bathing suit and women are dancing around in bikinis. The champagne is flowing. The grill is fired up.

“We thought here we go, we got it. We were going to have the song of the summer,” he said.

The song of the summer. The one you can’t get away from. It’s blaring from car speakers at the beach, it’s inescapable on the radio, and it’s a record label’s dream.

A news clipping from the Brookfield Courier, a newspaper from upstate New York, from July 27, 1910.

So just how big did “I’m the One” get last summer? We’ll come back to that later. First, we’re going to consider something else: Where did this idea of the song of the summer even come from?

To answer that, let’s head to a one-block stretch of West 28th Street in New York City. It’s now lined with flower shops and stores selling cheap T-shirts and bedazzled baseball caps. But this neighborhood was once known as Tin Pan Alley. And you could argue that it’s where the song of the summer was born.

“This is the place where the music industry as a business coalesced,” says David Freeland, a music historian.

It was the late 1800s, the era of sheet music. Walking the streets, you could hear composers playing their songs on cheap pianos through open windows. They wrote catchy tunes that fit into categories. “One was the sentimental ballad,” Freeland said. “Those were always popular. Another was the patriotic song. And also there was the summer song.”

In the early 1900s, newspapers were writing about the latest summer hits.

Soon, the papers were crowning THE song of the summer — the one hit everybody seemed to be singing.

Fast forward to the early 1960s in sunny Los Angeles. Film studios cranked out beach movies. Surf music was in its heyday.

“Pop music started being associated with sunshine and girls in bikinis and pools and beaches and vacations and road trips out West,” says Jen Gunderman, who teaches musicology at Vanderbilt University.

From then on, these images became commonplace in songs of the summer. But at some point, the song of the summer changed. It didn’t have to be about summer anymore. It just had to be really popular during the summer. And it had to swing.

“Maybe that’s the one thing they really all have in common is that you have to be able to wiggle when you’re listening to it,” Gunderman said. “It has to be something that is energizing.”

Now, naming a song of the summer — that can be pretty subjective. Billboard defines it as the most-popular song on its Hot 100 chart from Memorial Day to Labor Day.

So: Did DJ Khaled’s song, “I’m the One,” win the title last year?  “Nope! Came close, but no,” said Charlie Foster at Epic Records. The reigning champion of summer 2017 was a little song called “Despacito.”

“Hands down,” Foster said. “That was the song of the century.”

Listen to all the songs from this story, plus some other favorites from our staff, on our Spotify playlist: