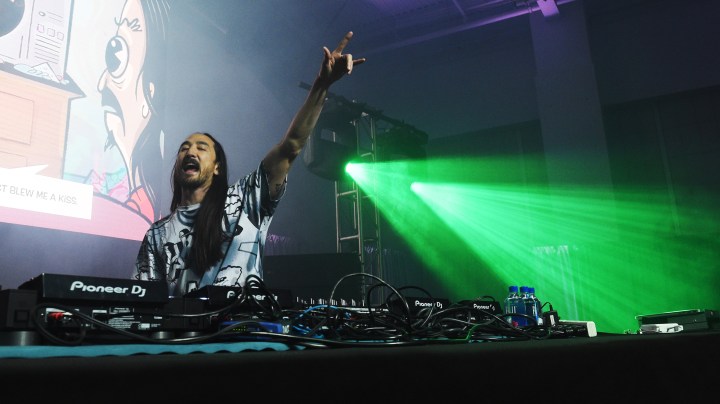 COPY
EDM artist Steve Aoki, seen here at a 2019 performance in New York City, partnered with an Italian digital artist to produce a multimedia NFT during the pandemic. Bryan Bedder/Getty Images for All Nippon Airways

EDM artist Steve Aoki, seen here at a 2019 performance in New York City, partnered with an Italian digital artist to produce a multimedia NFT during the pandemic. Bryan Bedder/Getty Images for All Nippon Airways
Listen Now

If you’ve been trying your best to ignore this whole crypto thing, it’s probably time you started paying attention. At this point, your favorite musician likely knows this stuff better than you do.

The Grammy Awards announced this week that next year’s show would be commemorated by, what else, a series of nonfungible tokens. A staple in the crypto world, NFTs can take the shape of just about anything: original tweets, video game features, basketball cards. But they’re most commonly a combination of digital art and digital receipt — proof from the seller of a digital item that the buyer is the only authentic owner or one of a limited number of authentic owners. NFTs allow creators of digital items to make those digital items scarce and hence, more valuable.

There are no signs yet of what exactly the Grammy NFTs will look like or how much they will cost. Music superproducer Quincy Jones is behind OneOf, the company partnering with the Grammys to create them. A sneak preview could be the “Crystal Token” recently released by the rapper Doja Cat on OneOf, seen below. It sold for $188,000.

The Grammys’ NFT announcement is the latest example of how the technology underlying the brave new world of crypto is influencing how musicians make their money … for better or worse.

The memorabilia and merchandise play

Steve Aoki is one of the most famous EDM DJs on the planet. If you’re unfamiliar with EDM, it stands for electronic dance music … ask your kids about it. Or just ask that annoying co-worker who won’t shut up about Burning Man.

Like most other musicians, Aoki had some unexpected downtime in 2020. The pandemic nixed the endless stream of live shows that was his life, not to mention his biggest source of income.

So Aoki did what a lot of people did during lockdown: He got into collectibles.

Not a cheap hobby. But around the same time, Aoki was getting into selling his own collectibles. He collaborated with an Italian digital artist to make something called “The Dream Catcher” series, a multimedia mashup of art and music.

“The same way people are buying jerseys of their favorite athletes, or they’re buying Pokemon, whatever it is that they’re collecting. Now music is another huge collectible industry,” Aoki said.

In a world where musicians earn less than a penny per Spotify stream and live touring can disappear with the next COVID-19 lockdown, Aoki sees digital memorabilia as an important new revenue source.

OneOf, the Quincy Jones company, is hoping to convert music fans into more crypto-literate consumers by making NFTs slightly less expensive. Think merchandise — a digital replacement for a concert T-shirt or poster as opposed to one-of-a-kind art only the ultra-wealthy can afford.

“It is our ambition to bring as many of these fans into the blockchain, and do so for the very first time,” said Adam Fell, co-founder of OneOf. “We don’t necessarily believe that it’s about trying to convert them into blockchain believers. They’re coming on and buying digital goods because they’re fans of the artist.”

Of any music genre, EDM probably has the most musicians turned crypto evangelists.

“When you release an electronic record that you put on Spotify or iTunes, if it’s not a worldwide hit, you don’t gain any real money out of it,” said Alesso, a Swedish DJ who has released his own NFT series. “[Crypto] could save a lot of people’s careers, making money on their own art.”

Alesso points to what one of his contemporaries has done — Justin Blau, who goes by the stage name 3lau.

Last month, Blau gave away 50% of the streaming rights to his song “Worst Case” to 333 fans. Via NFTs, those fans will get a cut of the royalties whenever someone plays “Worst Case” on Spotify, Apple Music or another streaming service. Prominent venture capital firms have invested in Blau’s “Royal,” a platform that hopes to be a marketplace for fans to buy music rights via NFTs.

Steve Stewart is the CEO of Vezt, an app that allows users to buy fractionalized shares of music rights, similar to owning a stock. He said the model of artists giving equity in their songs to fans is mutually beneficial.

“When you see Justin Bieber say, ‘My new record’s coming out, everybody stream it as much as you can,’ imagine if he had incentivized his fans with some ownership, with an ability to share in these profits,” Stewart said.

Vezt doesn’t operate on blockchain technology yet, but the company is experimenting with it. In the future, Stewart sees NFTs allowing music rights holders to get compensated in near real-time, every time a song plays, anywhere.

“[NFT]s allow a song to be valued, tracked and monetized,” Stewart said. “So you can say, that song was played in a bar in Berlin, it’s worth 10 cents, and that song is broken down by these owners. That money can be remunerated quickly. I mean, there’s no reason it can’t be done in near real time.”

Nika Roza Danilova has been making industrial-tinged pop music under the stage name Zola Jesus for over a decade.

When live touring dried up, she experimented with creating her own NFTs — digital self-portraits with original soundtracks.

“I saw it could be a multimedia art form, something I could play with and expand my skills into something more audio-visual,” Danilova said. “The lack of limitations was very exciting.”

Danilova sold two NFTs and made a little money. But the rapid speculation she saw in the music NFT space — with tokens selling for millions of dollars to what she saw as rich people more interested in NFTs than art — left a sour taste in her mouth.

“They weren’t being sold for the quality of the art or the intention of the art,” she said. “They were being sold as miniature banks or stocks. This didn’t really seem like a decentralized financial system.”

At the same time, she was partly relieved that it wasn’t her fans that bought her NFTs; instead, the buyers were NFT collectors. She worries about introducing her fans to a risky asset class.

Danilova knows firsthand how difficult it is to make money as a musician. And she sees the appeal of new tech that would allow fans to buy music rights and finance smaller artists like her directly. No more big, bad record labels and other intermediaries putting financial pressure on musicians.

But the thought of turning her fans into investors just doesn’t feel right to her.

“When you own the rights, you are embedded in the success or failure of the music,” Danilova said. “You have an invested interest in the music, not just emotionally or metaphorically. It’s literally financial investment. And at that point, when finances are involved, there are expectations involved.”