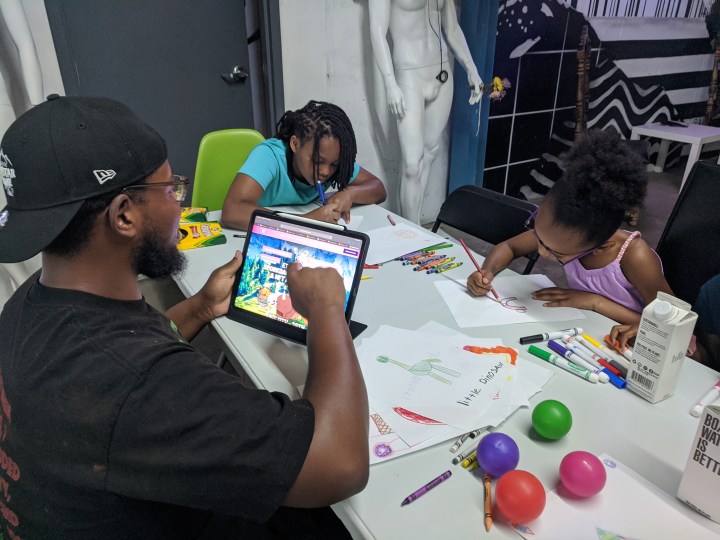 NFTs, or non-fungible tokens, are unique digital creations that have been in the news a lot recently for the eye-popping prices some of them are fetching in online art markets. Now a group of educators and entrepreneurs in Denver, Colorado has latched onto the idea of teaching young children of color about making their own NFTs, getting them familiar with a concept that could help them make money.

Robert Gray, a Black entrepreneur based in Denver and the owner of an NFT art gallery, IRL, is leading an art class for small kids. In Gray’s class, paper and pencils are only the beginning.

“With NFTs, it’s just a representation of art,” Gray told his class.

You can turn pretty much any unique bundle of information into an NFT, but they’ve really taken off in the art world. Each one has a digital fingerprint. It’s as if the provenance of a painting was stapled onto the back of a canvas, forever.

Jae Gardner is the Black entrepreneur and educator who came up with this class. “People of color always find out too late about the game,” Gardner said. He wants to get students turned on to NFT technology early. “Especially students of color, just because I felt that this crypto world was moving at a rapid pace, students just were going to get left behind,” he said.

Gardner said one of his goals is to bring this program into Denver Public Schools. The curriculum is anchored in making traditional artwork. The cutting-edge technology is sprinkled in slowly – in small, digestible portions. The students, including seven-year-old Jourie Brooks, get it right away.

“It kind of looks like a game,” Brooks said.

“Yeah! That’s exactly what it is,” Gray told her. “What other games do you like to play?”

The second grader said she was into a handful of online world-building games, which gave Gray his entry.

“You take your parents money and then you go by Toca Boca bucks or Roblox bucks,” he said, talking about common in-app purchases that include things like outfits and equipment for digital avatars. “You spend real money on those things. Those are called digital assets. What we’re creating today are also digital assets,” he said.

The parents see the value of digital assets, too. Brandon Jackson, Jourie’s dad, said he wants his kids to embrace their creative side and to understand the technology that will let them control the monetary value of that creativity in the future. “We have art and all the other stuff around it, but we really want to make, like, economic chess moves, as well,” he said.

At the end of the course, Jourie and the other kids will digitize their artwork and put it up for sale on NFT marketplaces.