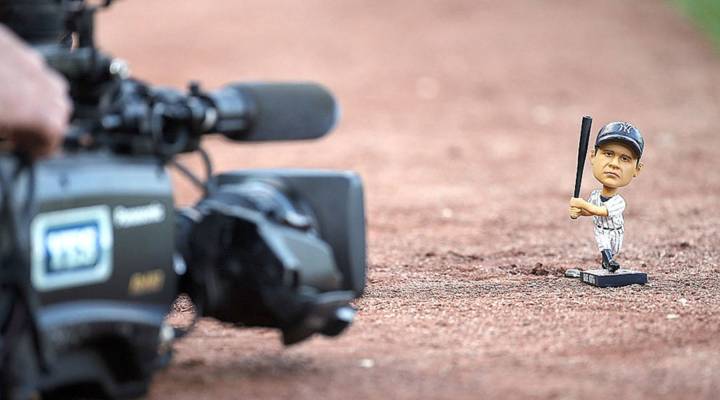 COPY
A cameraman takes a shot of a bobble head Babe Ruth before a game between the Boston Red Sox and the New York Yankees at Fenway Park in Boston in 2015. Jim Rogash/Getty Images

A cameraman takes a shot of a bobble head Babe Ruth before a game between the Boston Red Sox and the New York Yankees at Fenway Park in Boston in 2015. Jim Rogash/Getty Images
Listen Now

About half an hour before the Houston Astros take on the Oakland A’s in an afternoon game at Minute Maid Park, a bar across the street from the stadium, HTX Fan Tavern, is packed. But Gabe Luna, the bar’s manager, knows it’s about to thin out significantly.

The tavern is open solely on game days, and Luna said all the bar’s business comes from the foot traffic of baseball fans. The tavern is riding a nice wave right now — the Astros are selling about 6,200 more tickets per game than last year.

But leaguewide, attendance numbers are down more than 6 percent.

Maury Brown of the research and analytics company Bizball said fans are watching a lot of baseball on TV.

“Fox just reported that they’re seeing some of their best television numbers right now at the national level,” he said.

Teams have contracts with local television stations as well. Brown said Major League Baseball continues to rank No. 1 on television in the local markets where teams play. Brown said teams aren’t as worried about declining ticket sales because their finances aren’t as directly tied to the gate as they used to be.

“Up until about 10 or 15 years ago, it was still the No. 1 revenue driver,” he said. “But things have changed largely around television. We’ve seen a media rights explosion and that has really altered the landscape not just in baseball, but across all sports.”

League revenues continue to grow at an extraordinary pace. When Rob Manfred became the league’s commissioner three years ago, Brown explained that he streamlined operations to make it easier for teams to court sponsors.

“The first thing he did was unify all the arms of baseball, and that has been actually a cash cow for them,” Brown said. “They’ve really increased things on the sponsorship side.”

Brown said in 1992, league revenues were $1.2 billion. This year, gross revenues are more than $12 billion. Accounting for inflation, he said that means revenues for the league have grown 325 percent in just over 25 years.