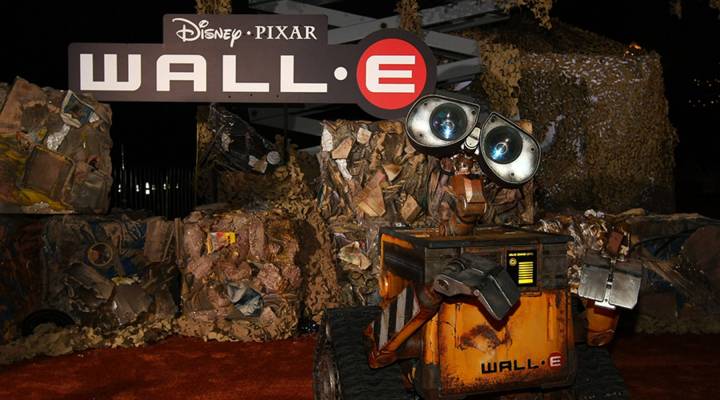 Ten years ago this summer, we all became familiar with the little trash compacter that could — WALL-E — and his slightly scary, Earth-scanning, but eventual companion Eve.

Disney’s “WALL-E,” which took home the Academy Award for Best Animated Picture in 2009, offered a darker look at Earth’s possible future — one where humans have ruined the planet’s environment with trash — and are forced to live in space, captive to screens, self-driving chairs and robot servants.

As a part of our summer entertainment series, we’re pondering the critiques and lessons of “WALL-E” with Hugo award-winning, science-fiction writer Kim Stanley Robinson, most notable for his Mars trilogy, a series of books all about the terraforming and subsequent settlement of the planet Mars.

Marketplace Tech host Molly Wood sat down with Robinson to discuss the real-life implications of issues brought up in the film, and how some of the critiques it made about society 10 years ago are still relevant now.

WALL-E depicts an Earth in squalor, completely covered in trash left behind by its former human inhabitants.

Robinson points to the creation of the Paris Agreement — a worldwide pact to reduce carbon emissions — as evidence that society has pushed for change on this issue.

Authors like David Graeber (writer of the book “Bullshit Jobs: A Theory”) have started to point how many of our jobs are meaningless. In the U.K., nearly 40 percent of workers said they were quite sure that their jobs made no significant contribution to the world at all.

Click the above audio player to hear the full interview with Kim Stanley Robinson.