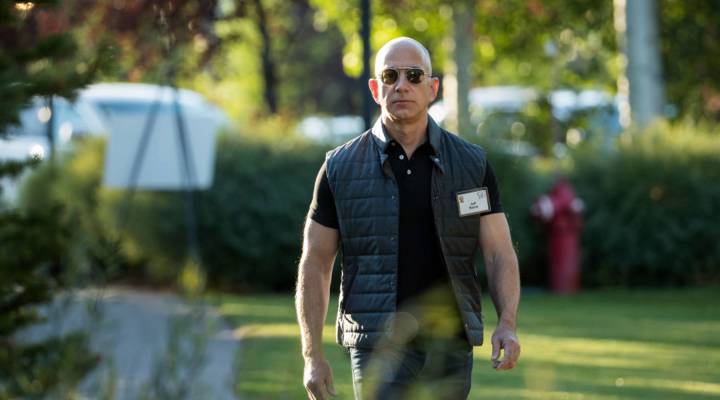 COPY
Jeff Bezos, chief executive officer of Amazon, arrives for the third day of the annual Allen & Company Sun Valley Conference, July 13, 2017 in Sun Valley, Idaho. Every July, some of the world's most wealthy and powerful businesspeople from the media, finance, technology and political spheres converge at the Sun Valley Resort for the exclusive weeklong conference.  Drew Angerer/Getty Images

Jeff Bezos, chief executive officer of Amazon, arrives for the third day of the annual Allen & Company Sun Valley Conference, July 13, 2017 in Sun Valley, Idaho. Every July, some of the world's most wealthy and powerful businesspeople from the media, finance, technology and political spheres converge at the Sun Valley Resort for the exclusive weeklong conference.  Drew Angerer/Getty Images
Listen Now

Ever since the rise of Silicon Valley, followed by the financial crisis, the dress code of the finance and technology industries has become more relaxed. Hoodies and jeans are one thing but, lately, tech and finance companies have embraced a different accessory: the vest. Worn over business casual attire, often with a company logo on the right breast, vests are a big part of the way business looks right now.

“Years ago, it would have been something that you might see worn at Walmart by your greeter,” said Susan Scafidi, founder of the Fashion Law Institute at Fordham University School of Law.

Scafidi says the vest emerged as the dress code of finance grew more casual in recent years, partly because expensive suits seemed garish after the financial crisis. And when Silicon Valley guys started showing up to meetings in jeans and hoodies, suits looked a little out of place.

Goldman Sachs acknowledged what it called the “changing nature of workplaces” in a recent decision to relax its dress code. JPMorgan and BlackRock recently relaxed theirs as well. Scafidi said the vest was also a way for companies to slap their logo on a casual piece of clothing, and maybe encourage a little camaraderie.

“That spread from company to company until it became not only a branding of individual companies, but a branding of an industry,” Scafidi said. This is a fact that’s readily apparent in Midtown Manhattan at lunchtime, where guys wearing vests are everywhere you look.

“I chose it for the color and the comfort level,” said Jason Adams, who works at Capital One. “I just feel very comfortable wearing it. Go vests!”

Annelise Matsuo, eating lunch with a couple of vest guys in Bryant Park, says she finds the cult of the vest extremely amusing.

“They just all walk in little rows together, like little ducklings, and they all look the exact same,” she said. “I just think it’s so cute and funny.”

“There’s something almost militaristic about it,” said Kelly AuCoin, an actor in the Showtime TV series “Billions.” He plays a hedge fund trader named Bill Stearn, who goes by “Dollar Bill” — a nod to his cheap wardrobe, almost always Dockers and a fleece vest, as well as a nod to the rush he gets out of making money.

“The bald head and the fleece vests are actually Dollar Bill’s source of power,” AuCoin said. An aggressive, intimidating power that Dollar Bill has to try to contain, sometimes without success.

“He has anger management issues,” AuCoin said. “He manspreads like a champion.”

The North Face recently refused to fill an oil company’s vest order, according to Buzzfeed. The clothing company Patagonia said it will focus on selling vests to “mission-driven companies that prioritize the planet.”

“I can see them taking the view that there are companies out there they just don’t want any association with,” said Mark A. Cohen, a retail professor at the Columbia Business School. A Patagonia spokesperson said its existing clients can keep ordering vests.

But the demand for company vests isn’t likely to go away any time soon. Cohen said that human beings simply like the affiliation a company-branded vest brings.

“It seems to be back in favor to show off the fact that you’re a member of the firm,” he said.