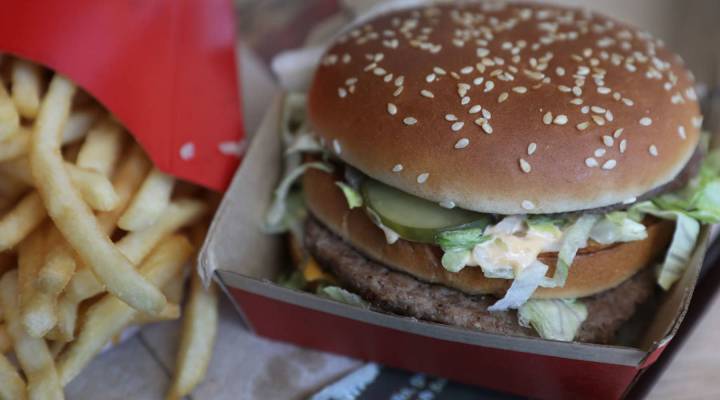 We go through a lot of economic indicators on this program, but only one can claim to be the tastiest of them all: The Big Mac Index.

It measures the difference between the price of a Big Mac in different countries to help us understand how different currencies are performing against each other. The index, developed by The Economist, currently suggests that the U.S. dollar is overvalued.

The publication’s economics editor, Henry Curr, joined us to discuss how it works and why a strong dollar isn’t necessarily a good thing.

The first thing to think about is what happens when goods are traded across borders, and that is that prices are brought into line, because if oil, say, costs a lot in America, but costs less elsewhere, then you could make a lot by shipping oil across the Atlantic and you’d have to adjust the transport cost of doing that. But generally, trade means that prices come into line.

It’s a bit more complicated when it comes to Big Macs. I don’t think a Big Mac that has been shipped across the Atlantic is going to taste very nice. But of course the components — the beef, the bread — can be traded. And then there was this idea that even the non-tradable stuff should flow into cost in such a way that goods cost the same eventually, because currencies are valued based on what they can buy at home. So if you can buy more Macs in one country and less in another, that suggests something’s out of whack.

What in reality do you find? What are your burger-nomic findings for burgers and what does that tell us?

Well, in reality, once you convert burger prices all into dollars and compare them, they’re in fact pretty out of line around the world. For example, in Britain, the Big Mac costs 23 percent less when you convert its price from pounds into dollars. Relative to almost every currency, the U.S. dollar looks overvalued because the Big Mac is more expensive. The only exception to that is Switzerland and Sweden.

An overly strong dollar can be good from an American perspective. A dollar goes further, it buys more burgers. What does that mean for trade though which has been in the conversation a lot these days?

While a strong dollar is bad for America’s exporters, because it makes American products more expensive overseas, I think the fact that the dollar is strong is a result of America’s economic strength is pushing against President Trump’s trade agenda. Because he wants to get the trade deficit down. But of course if your currency is very strong and you’re struggling to export and meanwhile your consumers find that they can import lots because their dollars are worth more, then that’s going to make the trade deficit still harder to close. So I think people who are worried a lot about trade tensions, especially people who think that all that matters is the trade deficit, should not be reassured by a strong dollar. It’s a point of worry.