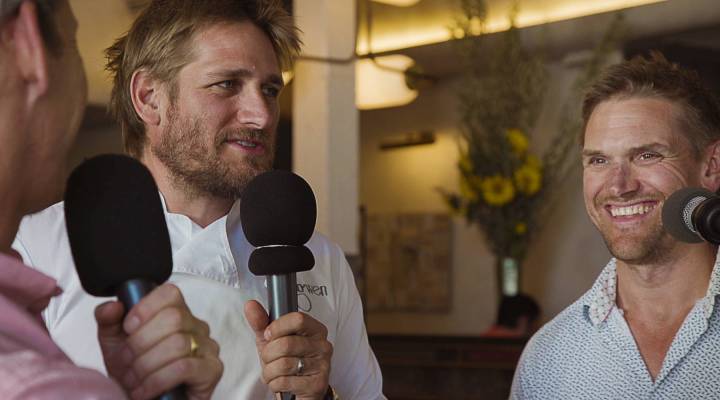 When chef Curtis Stone, known for hosting “Top Chef Masters” among other TV credits, decided to open his second restaurant, he knew he wanted to do it with older brother Luke, and that it was going to be a butcher shop/restaurant, with the butcher shop forming the heart of the establishment. Stone first made the jump from TV to restaurants back in 2014, when he opened fine dining establishment Maude in Los Angeles. Gwen, his newest venture, opened in Los Angeles in 2016, and is also be a high-concept eatery — but at the front of the restaurant is a recognizable butcher’s counter.

Marketplace host Kai Ryssdal visited the Stone brothers one afternoon at Gwen, just before dinner service, to see how business was faring. The following is an edited transcript of their conversation.

Kai Ryssdal: Who’s your clientele for this place right? This is 80 something seats. Who do you want in the door?

Curtis Stone: We want people to come in here that love good food. And you know I think at the end of the day we have a premium product, you know, in terms of the butcher shop. We take real care in both the sourcing, the aging, the butchering of the meat. And then we treat it pretty carefully over a fire. But it’s also just a piece of meat on a fire. You know? We don’t take it too seriously, and we have fun.

Luke Stone: When Curtis and I started talking about it, he came up with this idea of opening a butcher’s shop in the restaurant. Which we’re quite familiar with back home in Australia, but there’s not too many of them in LA so people think we’re a little bit crazy doing it here, but it really is [as] Curtis was saying before does form the heartbeat of the restaurant.

Ryssdal: Okay, wait. Does that actually say $129 a pound?

Curtis Stone: Well, you see all those white specks?

Meat for sale from the butcher shop at Gwen

Curtis Stone: That’s inter-muscular fat, or marbling, we call it. And that is not easy to obtain. So that’s when you have fat running right through the muscle and as you can see –.

Ryssdal: So Wagyu New York strip, right? Is that we’re talking about here?

Curtis Stone: It is, yeah, that’s Blackmore’s ranch from Australia.

Curtis Stone: Mate, when you put it in your mouth, you would pay double that for it.

Ryssdal: Well, clearly I’m going to have to come here for dinner because, you know.

Curtis Stone: I mean we have reasonable stuff, too. You know, this is obviously an extremely premium product.

Curtis Stone: But we have grass-fed beef and grain-fed beef that’s grown domestically.

Ryssdal: Right. Well, and it gets me back to the — you’re looking for a certain clientele to come in the door.

Luke Stone: Yeah, very much so. It’s, you know, we’re not — we can’t compete with the supermarkets, so we don’t try. We make sure that we have the very best of what we can source from, as you know, as you say, from the Wagyu in Australia to across the country, so …

Ryssdal: Do you have a meat buyer, I guess, or is it you guys?

Ryssdal: When you go back to Australia, do you go and get the beef?

Curtis Stone: Yeah, we have relationships direct with the ranches. I usually go to most of the farms that we buy from.

Ryssdal: So riddle me this, are you a chef or are you an entrepreneur?

Ryssdal: Are you? Except you’re sourcing your own materials and doing —

Curtis Stone: Well, that’s a part of being a chef. You’ve got to know where your ingredients come from, whether it’s meat or vegetables or where your dry goods come from. You know, you have to have really good relationships, and I think that’s the most important part.

The dining room at Gwen

Ryssdal: So what’s it like running this place. What’s I mean as you sit here, and, right? You’re in charge of the business side of the house, right?

Luke Stone: Yeah, it’s challenging, it’s a lot of fun. We roll around 60 staff at any one point in time in here, so between the butchers and two bars and events and kitchen and front of house, there’s a lot going on at all times.

Ryssdal: How tough is it for you to find people to be the servers and the front of the house folks?

Luke Stone: Yeah, it’s tough. Hollywood, well LA, I think, is an interesting sort of demographic in there’s a lot of actors and writers and producers and whatnot, but they all end up working here.

Ryssdal: Was it this place or Maude where you had the no actors rule?

Curtis Stone: Oh that was at Maude. Yeah it wasn’t — look, we love actors. My wife’s an actor. I can’t have a no actors rule. We wanted to hire floor staff that were dedicated to the art of hospitality, not the art of being an actor. So you know we tried not to employ people that was an in-between job for. So that’s the job cause we didn’t employ actors but you know the truth is where I put to whoever it is that sees this as their career, and really wants to you know wants to do great things in a hospitality sense.

Luke Stone: For our director of operations, he has a no head shot policy. So if your head shots on your resume, it’s very hard to get in the door.

Ryssdal: Thats the beauty of radio man, you don’t have to deal with headshots. What is it that people don’t understand about the restaurant business? Because you come in here and it’s a bustling great place, looks like a lot of fun, but clearly you guys are killing yourselves in the back of the house.

Curtis Stone: It’s a lot of work, yeah for sure. We start at nine o’clock in the morning most days and most people don’t come for dinner until 7 or 8 o’clock at night. so we’ve had a full day before the evening even really starts. Same with the front of house, you know there’s a variety, and these guys sometimes until 2 o’clock in the morning. So yeah, it’s a scrappy industry but I love it. You know its sort of, its either in your blood or its not.

Ryssdal: Why, why do you love it?

Curtis Stone: I think it’s always just an inch from a disaster and that’s kind of exciting.

Curtis Stone: It doesn’t sound like a great business model though?

Curtis Stone: Its true. It’s like you look at your watch and you’re always thinking ‘shit, is that the time already?’ You never think ‘oh God, today’s taking forever,’ the day just flashed by you and that’s I think that’s good if you can enjoy your work.