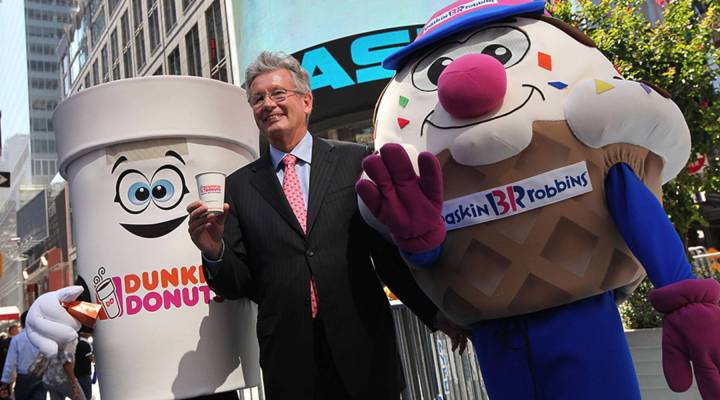 COPY
Nigel Travis, president and CEO of Dunkin' Brands, the parent company of Dunkin' Donuts and Baskin-Robbins, celebrates the initial public offering with some friends outside the NASDAQ MarketSite on July 27, 2011, in New York City. Mario Tama/Getty Images
Corner Office

Nigel Travis, president and CEO of Dunkin' Brands, the parent company of Dunkin' Donuts and Baskin-Robbins, celebrates the initial public offering with some friends outside the NASDAQ MarketSite on July 27, 2011, in New York City. Mario Tama/Getty Images
Listen Now

Few things go to together as well as a cup of coffee and a doughnut (it’s still too soon to say for the AT&T and Time Warner merger), which is no secret to Dunkin’ Donuts, the coffee and doughnut chain that, along with ice cream chain Baskin-Robbins, is owned by Dunkin’ Brands. Nigel Travis is the CEO of that company, and he talked to Kai Ryssdal about taking advantage of the new-found popularity of the humble doughnut, the flip side of an economy with a low unemployment rate, and what you’re most likely to buy to pair with that doughnut. What follows is an edited transcript of their conversation.

Kai Ryssdal: You’re not originally from … the Boston area, are you? How does a guy from East London end up running this company?

Nigel Travis: Yeah, I get asked that question a lot, Kai, and I have to say that for someone who’s now 68, I’ve had a kind of an eventful career. I’ve had the opportunity to move from East London, where I was brought up in a very entrepreneurial family, moved through human resources for 20 years and then finally ended up leading companies such as Blockbuster, Papa John’s, Dunkin’ Brands, and I’ve been a CEO now for 13 and half years.

Ryssdal: You spent time in Blockbuster, as you said. Also Papa John’s. But when you got this job running Dunkin’ Brands in 2008-ish or so, am I right that you’d only been in a Dunkin’ Donut shop like two, three times?

Travis: I hadn’t been many times. In fact, back in I think it was about 2007 when I was a Papa John’s, we had a meeting in Florida, went into a Dunkin’ store. It wasn’t very good and I said I wouldn’t return. Well, I’ve returned many times after that. And I’m kind of famed now for my store visits. And it’s not only my store visits, I think they’re more fearful of my 13-year-old son’s store visits.

Ryssdal: This is kind of a subjective question or maybe the answer is subjective, I don’t know, but it seems like Dunkin’ Donuts now, it’s almost cool and hip somehow.

Travis: Which I hasten to say I’ve never tried, but the doughnut business is coming back pretty strongly. I think people want to give themselves something to reward themselves. Doughnut’s perfect. And here’s an interesting fact: If you buy one doughnut, if you buy a coffee, if you buy a sandwich — the biggest attachment, in other words, the extra product that goes with it — the biggest attachment is always a doughnut.

Ryssdal: What extra do you have to buy with a doughnut?

Travis: Ah, fascinating answer to that. The biggest attachment to a doughnut is another doughnut. So, I mean, that is unusual. When I first saw the numbers, I said, “OK, go away and look at that again. That can’t be right.” But that’s right.

Ryssdal: Let me take you back to your HR roots here for a minute. One of the things you have said repeatedly in interviews and statements you made is that finding people to work in your shops is bar non the biggest problem that you have. Why do you suppose that is so?

Travis: Well, I think, Kai, it’s a really interesting issue and I think there’s many reasons for it. I mean, without being able to support this statement, when I first came into the industry in about 1989 when I joined Burger King, 80 percent of Americans started their working career in a restaurant.

Travis: That number now I think is dropped to 60. On top of that I think the industry has had a little bit of a bad image, which we’re trying to correct. But I think one of the issues is that because the economy is growing so fast, the demand for people is just outstripping supply, and we need to tackle the supply issue. And I think what that truly means is some kind of discussion about comprehensive immigration reform. So I think there are answers. But it’s an answer which at certain times isn’t always politically acceptable.

Ryssdal: What do you make of the push to get higher wages for folks in the fast food industry and in your industry, broadly speaking?

Travis: Well, the first thing I’d say is our industry at various times has said no too easily to many things. I prefer to think that wages should be driven by the market. We’ve always been very open minded to increasing the minimum wage either by state or by federal rates. But I think one thing that everyone has to recognize, at the end of the day, the best way to grow wages is to open stores. I mean, on an average year, we opened between 300, 400 net new stores with Dunkin’ alone. And we do that by focusing on franchisee unit economics. And if we don’t have good unit economics, we don’t grow and we don’t provide more jobs.

Ryssdal: Yeah, but just to be clear, more stores and more jobs doesn’t mean higher wages in those jobs.

Travis: No, but what I’m saying is it’s no good just going for higher wages and ignoring the other side of the equation, which is unit economics.

Ryssdal: Last question before I let you go, sir. And it’s the put up or shut up question: How many times a week you figure you stop in at a Dunkin’ shop or a Baskin-Robbins?

Ryssdal: Really. Wow. Are you getting a doughnut every time?

Travis: No, no, no. I drink coffee every time. I love our sandwiches. Our sandwiches are great. My wife and I, whoever is up first, brew Dunkin’ coffee at 5:30 every morning. So it’s not just the number of times I go into the store. I touch our products probably on average eight, nine times a day and it makes me very happy.