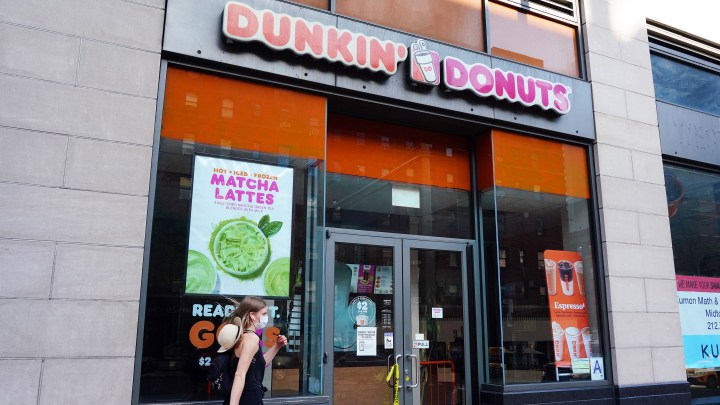 Inspire Brands, the owner of Arby’s, Buffalo Wild Wings and Jimmy John’s, is in talks to buy Dunkin’ Brands, which owns the namesake coffee chain and Baskin Robbins. The deal could be announced as early as today, according to The New York Times.

Marketplace’s Kristin Schwab is following the potential deal. The following is an edited transcript of her conversation with “Marketplace Morning Report” host Andy Uhler.

Andy Uhler: Kristin, what are the details of this deal?

Kristin Schwab: Well, Dunkin’ has been doing pretty well during the pandemic. Its share price has more than doubled since March. And this deal would take Dunkin’ private at more than $106 a share, 20% higher than the company’s closing price on Friday.

Uhler: But if I remember right, Dunkin’ wasn’t doing so well at the beginning of the pandemic.

Schwab: Yeah, the company did see an initial 20% drop in sales and even made plans to close about 800 stores. But since then the coffee chain has really pulled ahead by building up its app and drive-throughs.

Uhler: So it sounds like people are still buying coffee out even when more of us are working from home?

Schwab: Yes, but our caffeine habits have changed a bit. Customers have been visiting Dunkin’ later in the day. And they’re actually spending more on pricier items like espresso and other specialty beverages, which has been part of the brand’s goal for a while. A couple years ago, Dunkin’ dropped “Donuts” from its name to focus on drinks. And now that’s how it gets more than half its revenue.

Uhler: It seems like this is a trend we’re seeing during the pandemic, chains being bought to create big conglomerates.

Schwab: This summer was the busiest in decades for mergers and acquisitions — more than a trillion dollars in deals were done in the third quarter. Part of that is because mergers and acquisitions slowed at the beginning of the pandemic and have now gotten going again. But, also, companies are starting to think about what a post-pandemic world might look like, and what deals they can scoop up now. For Inspire Brands, adding Dunkin’ would expand its portfolio into the breakfast space.