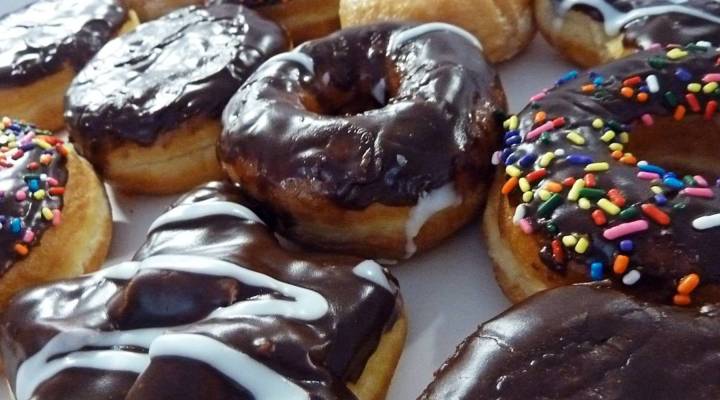 For all the things written and said about Los Angeles, you may not know that La La Land is also kind of a doughnut town. If you count them on Yelp, there are more doughnut shops in LA County and there are in New York City or in Chicago. But it’s not just the numbers that make the LA doughnut scene special. David Pierson is a staff writer for the Los Angeles Times and recently tracked down the backstory of an often unsung LA icon — the pink doughnut box. He talked with Marketplace host Kai Ryssdal about what he learned. The following is an edited transcript of their conversation.

Kai Ryssdal: There is nothing I like better than an interview in studio with a show and tell. And we have here — well, you tell us.

David Pierson: What we have here is the classic 9-9-4, which is the pink doughnut box that all of us in LA are very familiar with.

Ryssdal: OK, so, first of all, does it have doughnuts in it?

Pierson: It has a dozen doughnuts.

Ryssdal: Good. We’ll get to that in a minute. Why you’re here though, is because of this box and its truly iconic nature here, certainly in Southern California, and it’s spreading.

Pierson: We felt like it was sort of an unsung icon of the city to sing, that sort of just in the background of our daily lives that we never really appreciated. And actually, my editor, who spent some time in New York, pointed out, “What’s the deal with these pink boxes?” because he wasn’t as familiar with them as we are.

Ryssdal: You compare that in your article to those coffee cups in New York with the Greek restaurant.

Pierson: Yeah, I mean the blue Anthora cups. And I believe a lot of ink has been spilled waxing poetic about this cup, but no love has ever been given to the pink box.

Ryssdal: Where did they come from? How did LA wind up as the pink doughnut box place?

Pierson: So, the pink boxes have existed for decades but really didn’t reach the sort of, let’s say, unsung icon status until the 1970s. That’s when there was this demographic change in our local doughnut industry. Cambodian refugees started coming into the country after the Vietnam War, and they were drawn to the doughnut business, and they’re the ones who made these pink boxes with doughnuts sort of synonymous.

Ryssdal: And the difference between the doughnut industry here, you write, and elsewhere — for example, East Coast Dunkin’ Donuts, all that jazz — is that here is mostly mom and pop small shops.

Pierson: Yeah. So, that’s really sort of the special thing about LA’s food scene is there are so many independent businesses, not just for doughnuts but also hot dogs and hamburgers you just don’t see as much in other parts of the country. But because these refugees did such a good job building and sustaining this doughnut industry, it’s been very difficult for these national chains to come in and use their branded boxes.

Ryssdal: The pink ones are a hair cheaper than regular white boxes?

Pierson: Yeah, so, the box became attractive to these refugees because they were just a few pennies less and every penny counted when they were trying to sort of build a foothold in this country.

Ryssdal: And if you’re going through, you know, 3,000 boxes there or whatever, it makes a difference.

Ryssdal: It seems though that as this economy changes, the doughnut box is changing as well.

Pierson: Right, so you know, second generation, the children of these refugees are starting to take over the business now, and they’re sort of in a world now where there’s such a thing as the “artisan doughnut,” and they’re looking towards rebranding and taking their mom and pop shop to the next level. And one of the things you can do is order one of these glossy customized boxes as well. It’s branding.

Ryssdal: What’s funny is how disdainful you say it.

Pierson: Yeah, you know, I think it’s a piece of nostalgia that I think that would be missed and some doughnut shops have seized on that. Though ironically, not one here. In Portland in a shop called Voodoo Doughnuts, which is sort of a pioneer in the gourmet doughnuts.

Ryssdal: It’s about as hipster as you can get.

Pierson: Exactly, and they completely embraced the pink box, and I think their motto is “good things come in pink boxes.”

Ryssdal: Let’s cut to the chase. What and what kind of doughnuts did you bring?

Pierson: Oh, just your classic glazed and sprinkle. Nothing fancy. 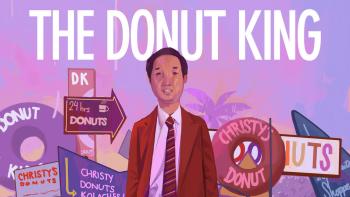