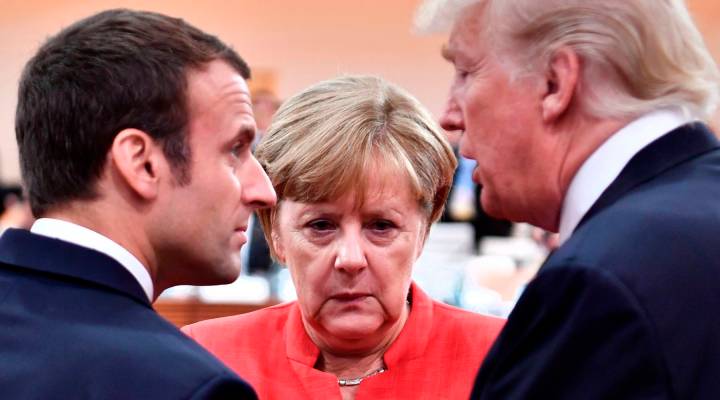 The Trump administration plans to impose a 25 percent penalty on steel from Europe, Mexico and Canada and a 10 percent penalty on aluminum from those regions. Experts caution that you can expect some form of retaliation in response to the tariffs; a few months ago the European Union released a 10-page list of U.S. products it would slap tariffs on in retaliation, which includes orange juice, cranberries, cigarettes and ovens.

The White House has taken a hard-line stance on trade this week, with President Donald Trump also reigniting trade tensions with China. On Tuesday, his administration announced it would place tariffs on $50 billion worth of Chinese goods.

To get a sense of what this means for our relationship with Europe, specifically, we spoke to Ian Bremmer, founder of the political risk consultancy Eurasia Group. Below is an edited transcript of our interview.

Did the Europeans expect that the U.S. would actually go through with these tariffs?

The Europeans knew it was a possibility. And it’s hard to negotiate with the European Union as a collective. They ultimately were willing to provide some benefits to the United States, but there wasn’t a lot of flexibility. And they couldn’t get to a deal, and so we don’t have permanent exemptions.

So does this mean a trade war?

No, but it means the trans-Atlantic relationship is in disarray. I mean, look: we just had in one week meetings by the German chancellor and the French president to the White House. They could not have gone worse. They came away with absolutely nothing both on the Iran deal and trade negotiations. Merkel doesn’t have a good relationship with Trump personally. Macron absolutely does, but it didn’t matter. I’ve spoken to the ambassadors; I spoke with ministers from the country. They are enormously, I would say, upset to despondent about the state of relations with the United States more broadly right now. And trade’s just one manifestation of that.

But talks could continue. Just because tariffs are now being assessed doesn’t mean that the talking stops?

Of course not. And we’re still allies; it’s not like they’re leaving NATO, and we’re still all in the WTO. But the actual relationship between these leaders — the individuals and the administrations around them — it’s pretty broken right now. I mean, if anything I’d say that the bilateral engagement between Trump and China’s Xi Jinping is probably more constructive on a day-to-day basis right now than the engagement between Trump and most of the European allies.

All right, so public sector tensions, essentially. But in the private sector, are corporations still doing business across the Atlantic?

In a sense, it’s easy for Americans and Europeans to continue doing business together in the private sector. But in the public sector the trans-Atlantic relationship was the bedrock on which globalization was really constructed. It’s the post-war order. It doesn’t feel that way anymore. And the idea that this trust and common values between our governments that that isn’t enough doesn’t move the needle. I mean, ultimately, Trump’s unilateralist and his approach to foreign policy, he views allies as challenges to be overcome and he thinks American power should get these guys all in line and at least this trade issue right now that that hasn’t moved either side one bit.