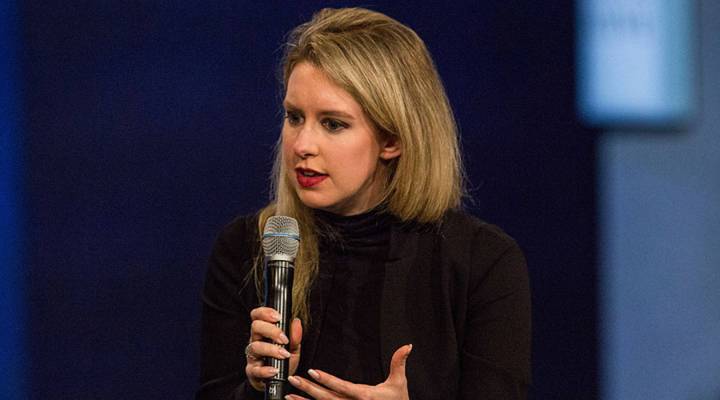 In October 2015, an investigative reporter for The Wall Street Journal named John Carreyrou stumbled across a pretty amazing story. The technology behind the much lauded biotech startup, Theranos … well it didn’t work, at least not in the way its founder, Stanford drop out Elizabeth Holmes, had said it did. Carreyrou ultimately unveiled the lengths to which Holmes and her COO and boyfriend, Sunny Balwani, went to mislead investors and business partners, and threaten employees who suspected something was amiss. Since then, Carreyrou has written a book, “Bad Blood: Secrets and Lies in a Silicon Valley Startup,” with even more details about Holmes, her company, and how it took so long for everything to fall apart. He spoke about it with Marketplace host Kai Ryssdal. The following is an edited transcript of their conversation.

Kai Ryssdal: Would you remind us what the supposed promise of Theranos was?

John Carreyrou: Yes, it was that Elizabeth Holmes, Theranos’ founder, had invented a way to run the full range of laboratory tests off just a drop or two of blood. It would have been a big breakthrough had it been real. Thousands of scientists have been working on this for 15 or 20 years and being able to run so many blood tests off just a tiny volume of blood is not a nut that anyone has cracked before.

Ryssdal: Explain to me then what happened when she made the pitch to investors. I mean, she took one of these boxes, one of these machines and plopped it on a table. And then what?

Carreyrou: Right, well there was this VIP demo program where prospective investors and board members and also journalists would be invited into Theranos headquarters in Palo Alto and shown this black machine, this black box called The Mini Lab. Their finger would be pricked and a drop of blood would be placed in the machine. And then they would be ushered out and shown Theranos headquarters or meet with Elizabeth in her office and what would happen is as soon as they were out of the room, a Theranos technician would stop the machine take the cartridge out, take the little blood sample out, and bring it to the lab where it was either tested on the bench or on modified Siemens machines.

Ryssdal: And there’s a great scene where another reporter, and I apologize I can’t remember where he was from, but he sat around waiting for his results to come, looking at the machine, and apparently Theranos had hacked the machine not to show an error code?

Carreyrou: Right. That was Roger Parloff, a writer at Fortune magazine. He went to have a demo and he was waiting around for 25 minutes and the machine looked like it was going to take much longer. And so he had to go back to work. Turned out that an app that Sunny Balwani, Elizabeth’s boyfriend who was the COO ordered built, had frozen the tests so it looked like that the test was just taking place slowly. In fact the machine inside had malfunctioned and the app kicked in and showed that the test was taking a long time when in fact it should have showed an error.

Ryssdal: How did it last so long then? Because let’s remember it’s only I think this past January that she settled a lot of the charges you talked about in this book –

Ryssdal: Right. So beginning of the year right? So at least 12ish, 13ish years right?

Carreyrou: I think one answer to that is that she and her boyfriend Sunny Balwani, who was the No. 2 executive at the company, really instituted a culture of fear and secrecy and intimidation at the company. They let it be known that the company would have no problem suing employees if they spoke up, if they left and then spoke up. And so employees who knew that things weren’t right usually left quietly, they were either fired or they left voluntarily but they didn’t speak up.

Ryssdal: This probably will not amuse you at all or frankly your sources for this story that you reported in the Journal but honestly the most amazing part of the book, once you get past how Theranos was being run, comes after you start reporting this story. And some of the tactics that Elizabeth Holmes and the company and her lawyers used on you and the sources to intimidate you.

Carreyrou: Right. It was something I had never seen before. I’ve been a reporter for more than 20 years and I’ve encountered some pushback. But this was essentially a scorched earth campaign to threaten and intimidate my sources and get them to recant. Theranos very likely hired private investigators to have several of my confidential sources followed after they figured out who they were. I may even have been followed. David Boies, the famous lawyer who was Theranos’ outside counsel came to our offices at the Journal twice to try to get us to kill the story. I had never seen something on that scale.

Ryssdal: Has to be said here though that for a very long time this company and Elizabeth Holmes got, you can only call it glowing treatment in the press including in the Journal, we have to say.

Carreyrou: Right. One of the things that I don’t beat around the bush about is that the first mainstream publication that wrote about Elizabeth Holmes was the Wall Street Journal. It was the Wall Street Journal’s editorial page and a piece in early September of 2013. She then used that story along with the fact that she was rolling out her blood tests in a few Walgreens stores to convince new investors. Then of course other publications jumped in on the bandwagon such as Wired, Fortune magazine, which put her on its cover in June of 2014. That was probably the piece and the cover that rocketed her to fame.

Ryssdal: So step back for me for a minute here and consider this: We are we are no strangers in this country to stories coming out of Silicon Valley of wunderkinds and the amazing next best thing and all of this. What does this story say about first of all, how we treat Silicon Valley in this economy, but also the idea that there were regulators in theory all over this company right, the FDA and all of that and yet it still went on?

Carreyrou: I mean one of the lessons is that we shouldn’t lionize these young founders so much. We should keep a healthy dose of skepticism. There’s certainly a lot of innovation going on in the Valley but there’s also a lot of pretending. And Theranos was Exhibit A of that. It was a fraud but it was also a story of hubris and incompetence. And you know Elizabeth Holmes and her boyfriend Sunny Balwani, were incredibly arrogant and I think it was part of the reason that people believed in them and believed in her and invested.