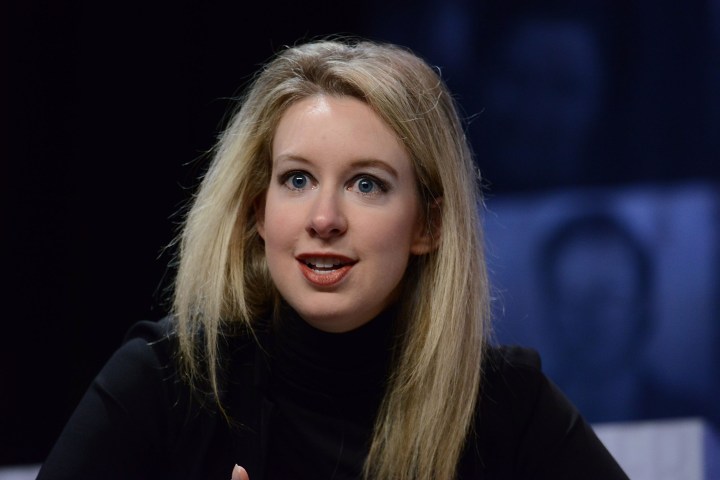 COPY
Holmes, who was acclaimed as one of Silicon Valley's rare female CEOs, is accused of fraud in the spectacular failure of her medical-technology company, Theranos. Lisa Lake/Getty Images

Holmes, who was acclaimed as one of Silicon Valley's rare female CEOs, is accused of fraud in the spectacular failure of her medical-technology company, Theranos. Lisa Lake/Getty Images
Listen Now

Tuesday is the first full day of witness testimony in the trial of Elizabeth Holmes, founder of the disgraced blood-testing startup Theranos. Federal prosecutors say that Holmes, who started the company at age 19 and drove its valuation to more than $9 billion before it toppled, intentionally deceived investors about the company’s technology and harmed patients who received faulty blood tests. The defense argues that Holmes’ failures do not constitute fraud.

“They were testing people’s blood. They were giving patients results based on those tests that had bearing on whether or not they had diseases or other medical conditions,” he said. “So this isn’t a widget or an app or a game that you could play on your iPhone, but something that has to do with life or death.”

David Brancaccio: What did we learn about each side’s arguments in the opening days here?

Adam Lashinsky: On the prosecution side, we really didn’t learn anything. If you’ve been following this case even fleetingly, you know that Elizabeth Holmes has been accused of fraud, and that’s the prosecution’s case — that she defrauded investors, partners and patients of her defunct blood-testing company. From the defense, we actually learned something — which is that they have a defense that is not that she’s insane, which is not that she was coerced by her co-founder and ex-lover, but rather that she wasn’t as responsible for everything that went on at Theranos as we thought. And, furthermore, that she didn’t personally profit from any of this because the company went bust and she never made a dime.

Brancaccio: On that last part: some may hear this as similar logic to a robber allegedly stealing a car and totaling the car, so therefore it’s OK because the robber didn’t end up with a working car.

Lashinsky: I think that’s a very good analogy. Her defense lawyer argued in his opening statement that she certainly could have sold stock on multiple occasions, and didn’t. She held on, which is sort of a source of pride of Silicon Valley entrepreneurs — “I’m not selling until we’re a success” — and she didn’t, then she ended up with nothing. This will be one story that the defense goes with to try to, I guess, elicit some compassion from the jury.

Brancaccio: This must be on your mind as the trial proceeds, but a lot of companies in the Silicon Valley — and a lot of companies elsewhere involved in innovation — often bring imperfect products to market, and then hope their research catches up before anybody notices.

Lashinsky: That’s absolutely true. That’s part of the glorious legend of Silicon Valley, started by none other than Steve Jobs, who operated this reality-distortion field and who convinced people that he was capable of doing something he wasn’t — but then, lo and behold, later on he was. And it was wonderful, and everyone was delighted, and he made lots of money. But this is a medical-products company — they were testing people’s blood. They were giving patients results based on those tests that had bearing on whether or not they had diseases or other medical conditions. So this isn’t a widget or an app or a game that you could play on your iPhone, but something that has to do with life or death. And so the prosecution certainly will argue that this is nothing like the Silicon Valley companies that we’ve read about and gloried in, and it’s completely different.