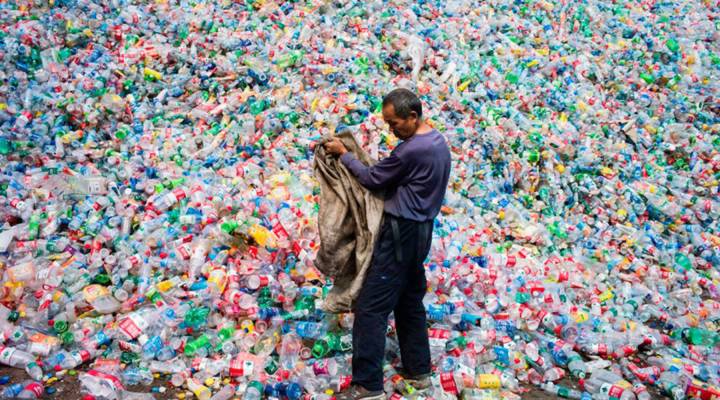 Last year, the United States exported to China $5.6 billion worth of shredded steel, corrugated cardboard, beverage containers and other scrap. That number has been coming down since the Chinese government instituted policies aimed at protecting the environment, including a ban on certain materials and higher quality standards on imports in 2018. But last week, Beijing suspended scrap imports from the United States altogether. Marketplace host Kai Ryssdal talked with Adina Renee Adler, who’s senior director of government relations and international affairs at the Institute of Scrap Recycling Industries, about what that means for the U.S.-China scrap trade. The following is an edited transcript of their conversation.

Kai Ryssdal: Just so I have some baseline here, what kind of scrap are we talking about with the Chinese now?

Adina Renee Adler: Yeah, sure, we’re talking mainly paper and plastic, and a lot of that comes out of the household recycling streams.

Ryssdal: Well, let’s talk about what happened then and what it means. So I guess last week, right, as Secretary Mnuchin and that whole trade delegation were in China, the Chinese recycling folks, in essence, closed the door.

Ryssdal: So where’s it going? Is it just sitting on barges offshore somewhere or what? What are the recyclers doing with it?

Adler: There were containers that had already left the port but had not yet arrived to China. And those are the ones where we’re not 100 percent sure what’s going to happen to them. Some of them are idling in the water, some of them were diverted to other markets. There were some that were recalled back to the United States. I mean, it’s a real big challenge right now. It can create an opportunity. Do you think about finding customers? Do you think about new technologies? But it’s going to take some time.

Ryssdal: Give me a sense of scale. So this has been shut down for a month, right? It’s May 4 to June 4. How many tons of scrap and recyclables are we talking about here?

Adler: — only because that’s what resonates with policymakers. We believe that about $400 million worth of trade is being impacted just within a month.

Adler: And then on top of that, there could be even as much as another $100 million worth of costs associated as an impact.

Ryssdal: With the stipulation that correlation is not causality, it is of interest and note that this decision was made or put into effect at the very same time that Secretary [of Treasury Steven] Mnuchin and [White House chief economic adviser] Larry Kudlow and the U.S. Trade Representative Robert Lighthizer were over in China talking trade.

Ryssdal: There’s a circle of life thing here that happens, right? I mean, we take all these this scrap and recyclables, we send it over there, the Chinese turn that into, in part, cheaper goods, cheaper packaging that they then send back to us, right? And then we take the scrap and send it back and it goes on and on in a circle.

Adler: Yeah, I mean, you know, I do want to clarify that we do have a lot of recycling that does happen in the United States. And certainly, to the extent that there are economies of scale where you can do some of the recycling processes in China, because just as you said, then they turn those commodities back into new products that they sell back here in the United States. And certainly, this measure has been felt by Chinese manufacturers, who demand these scrap commodities from the United States because they are high quality and they’re ready to be used, ready to go back into a manufacturing stream. And so, we’re hearing from a number of those industries that are extremely concerned about being able to get those supplies. And then how are they going to be able to fulfill the orders for the consumer goods that they make out of these supplies?