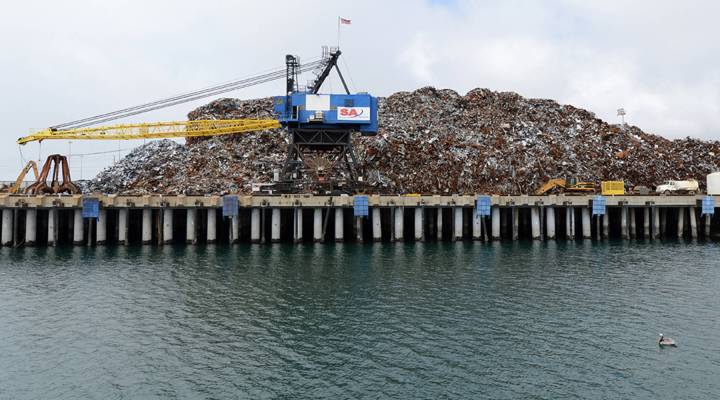 America is known for it’s large trade deficit with China. But the United States does have a surplus of one particularly smelly export — trash. Erica Phillips of the Wall Street Journal wrote about this unusual trading relationship in her piece “Oh, Scrap: China, the Biggest Buyer of America’s Trash, Wants No More.” Erica talked with Marketplace host Kai Ryssdal about China’s changing attitude towards American scrap.

Kai Ryssdal: We should say here, just to remind everybody, we are the biggest waste producer in the world.

Ryssdal: OK. Where does it all go?

Phillips: Well, myriad places, but the story I wrote about dealt with our recycling, which, you know, curbside stuff gets collected every week ideally by a municipal program of some sort. A large portion of that gets actually packed down into bales and shipped on container ships to Asia, where it gets turned into consumer goods that come back here to the U.S. So kind of a circular economy happening.

Ryssdal: And the story is now that China, which has been the recipient of so much of our recyclable scrap over the past number of years, has said in essence, “We don’t really want it anymore.”

Phillips: That’s right. This is a huge wrench in the whole system. So plastic, paper, goes over to China gets made into cardboard and toys and things like that. But China, it just so happens, is becoming a much more prosperous economy, and they’ve got a lot of stuff of their own — packaging that comes with things that their own residents are buying and consuming. They’ve decided, “Actually, you know what, world? No more scrap coming our way. No more paper or plastic. We’re done.”

Ryssdal: So what are we going to do with it all? I mean, you set a scene down at the Port of Long Beach, where it’s just piling up there.

Phillips: Yeah, actually in the L.A., Long Beach area, I’ve talked to folks who are having to rent out a whole 60,000-square foot warehouse just to stick their bales of cardboard and plastic for the time being until they figure out customers maybe in other countries, or potentially the U.S. industry for using scrap material to make into new goods, starts building up things back up again.

Ryssdal: Yeah. There is also a global trade deficit story actually in this, in that you say in this piece, container ships that come over here from China full of toys and computers and whatever it is, they would otherwise go back empty were it not for this scrap we’ve been sending. So, there is a little bit of, it’s very circular.

Phillips: Yeah, every month about — and I track this — the L.A. and Long Beach ports bring in about 750,000 20-foot-equivalent containers filled with, well filled with stuff, and on the back route, going back to Asia where it’s all primarily coming from, a lot of times there’s just not anything to really put in there because we’re consuming it all or sending back the containers to basically get refilled with the next round of stuff. But without that destination on the back haul, that all kind of breaks down.

Ryssdal: The amount of time that the folks down at the port of Long Beach and Los Angeles can let that stuff pile up in their warehouses is finite, right? When are they going to run into serious trouble and need to do something with it?

Phillips: There is quite a bit of space here in the good old United States. Stuff is piling up, but they’re finding another place for it. At least this one company I spoke to that’s getting the 60,000 square-foot warehouse, he doesn’t anticipate that he’s going to need it for longer than six months. He’s getting a short-term lease, so ideally, they’re going to find other customers, they’re going to figure out where that stuff’s going to go.

Ryssdal: The other fix to this, obviously, is that we just waste and discard less stuff.

Phillips: We waste and discard less stuff, or we put stuff on the curbside, the recyclers pick it up and it ends up in a landfill. If this 60,000-square-foot warehouse, for example, fills up and it ends up not having anywhere to go, it’s probably going to go to landfill.