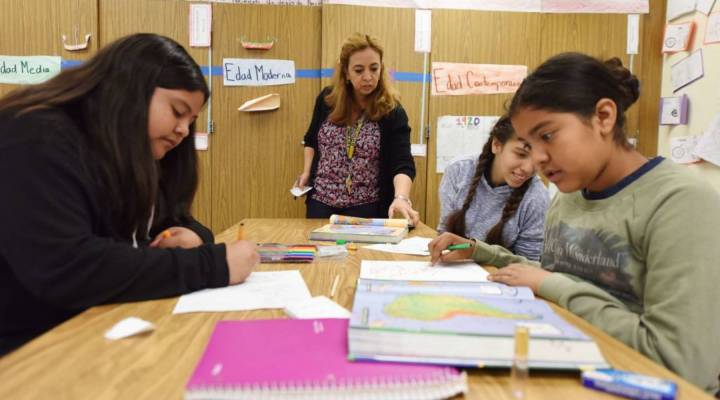 David Brancaccio and Janet Nguyen May 9, 2018

The education system drastically needs to be revamped, according to a new book called “What Schools Could Be.”

The author, venture capitalist Ted Dintersmith, visited all 50 states in a single school year, talking to teachers and observing the methods they used to engage students. One big issue that he says he learned more about: the ineffectiveness of testing, whether it’s state-mandated tests, Advanced Placement exams, the ACT or the SAT.

They’re about memorizing and replicating information rather than encouraging students to raise insightful questions, he argued.

Dintersmith joined David Brancaccio to discuss his experience interacting with teachers around the country, along with the flaws he sees in the education system. Below is an edited transcript of the interview.

Ted Dintersmith: One of the big issues — and I learned about this in spades and heard from so many people — we impose these obsolete metrics, these measures that really don’t tell us much about the potential of kids, onto our schools, onto our teachers, hold them accountable, put those in the monthly magazines in a community. And they really don’t foster the types of skill sets and mindsets that kids are going to need going forward. And they send a daily, I think, offensive message to teachers that we don’t trust you.

Brancaccio: Well, as you and I are speaking, there are public schools across the country that are doing standardized tests. And you think that that’s going to come up with a measure — the results of those tests that don’t really help us prepare people, huh?

Dintersmith: Right. When people tell me they believe in the test mindset, and I run into a fair number of those people, typically almost exclusively non-educators: I say go look at the questions. Go online and look at some of the questions, and ask yourself: Does this have anything to do with my adult life? Are these even well-posed questions? They are not, particular with the state-mandated tests. And so when you look at that and you say we’re holding schools, students, teachers accountable to things we owe it to them to make sure we’re holding them accountable to something thoughtful, something that matters to kids as adults. And I think we’re falling short on that.

Brancaccio: So we should still measure, but we got to measure something different.

Dintersmith: Well, I distinguish between assess and measure. So you’re in the world of journalism. If somebody wanted a job with you, if they sent you a portfolio of their work, you could assess it. You would know whether they were really good or not. If they sent you a number based on a multiple choice test about when the New York Times first published, you’d know nothing, but we impose on our schools a lot of the latter and very little of the former.

Brancaccio: But we have to assess — in other words, we have to know if what we’re doing in a classroom is working.

Dintersmith: Right. And I write about things from the classroom level, where I see these amazing things from kindergarten through college. But I also write about thoughtful next-generation assessments, and talk particularly about what the state of New Hampshire did. Competency-based, performance-based, very thoughtful. Great eight-year transformation across all their schools. And anecdotally, when I travel to New Hampshire and give talks to audiences, the best questions I get are from public high school kids in New Hampshire. So something there is working.

Brancaccio: We could do a double blind study and get some high school students from around the country. You’d be able to pick out the smart ones from New Hampshire.

Dintersmith: I believe all kids have tremendous potential. So it’s not so much smart versus not smart. It’s more: How do you engage with the world around you with what you’re hearing? Are you actively encouraged to generate your own thought-provoking questions, or are you valued and rewarded as a student for memorizing the content and saying it back. And too often in schools, it’s the latter, the memorize and say back. And it’s really aligned with, matches with the state-mandated assessments, the ACT, the SAT, the AP exams, which are really largely memorize, replicate low-level procedures, follow instructions, say it back.