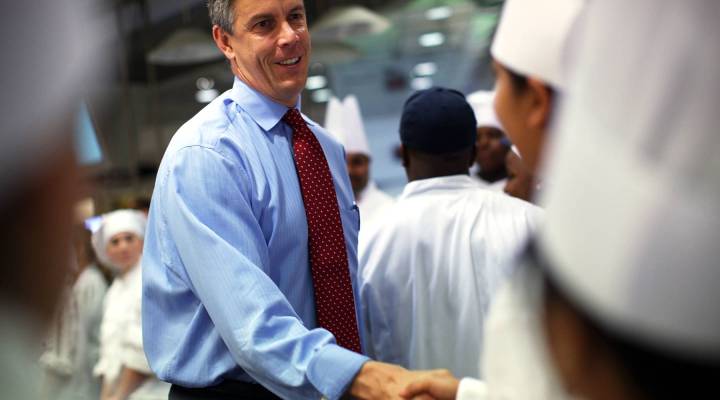 Former Education Secretary Arne Duncan wrote about his experience working in education in a new book called “How Schools Work.” Continuing the conversation Duncan had with Marketplace’s Amy Scott, they discussed the seven years Duncan spent in Washington, and what has transpired since then in the education system. The following is an edited transcript of their conversation.

Amy Scott: You were one of the longest serving secretaries of education. You were in office for seven years. It’s been about two and a half years since. How has the education system changed since you first took that job.

Arne Duncan: We’d need another hour for that conversation, Amy (laughter.) I’ll just say this simply: education should be the ultimate nonpartisan or bipartisan issue. This should be nothing Republican or Democrat about giving a child a chance to get a great education. And you hear none of that conversation coming from D.C. today. You just see ideological battles, you see small ball, it’s nothing about helping to educate our way to a better economy.

Scott: Well, some of your critics have said that during your time in Washington, education actually became a more divisive issue. Do you think you could have done more to to make it a bipartisan cause?

Duncan: I think we can all do more. I will tell you, I spent hundreds and hundred of hours with our Republican friends and colleagues and worked very closely with them. But it was, candidly, much more of a challenge in D.C. And I’ll give you one example — the governor of Mississippi was desperately upset that we weren’t able to fund Pre-K expansion in Mississippi. And this was a very, you know, conservative governor. He and I may not have agreed on much else, but we simply couldn’t get his Republican colleagues in Congress to support the kind of funding that would allow more money for Pre-K in Mississippi and across the country. So, real world: loved the partnership, loved the work. D.C. unfortunately, was much tougher.

Scott: So the first sentence in your book, and I know it’s meant to be provocative, is education runs on lies. Explain what you meant by that.

Duncan: Well, it’s trying to reflect on you know a couple of decades working in education and all the things that we say we care about, all the things we say we value, but our actions don’t match up with our words. And in the book I talk about gun violence and how much we actually don’t care about children’s lives. Politicians mouth lots of platitudes, but if you really look at what we’re doing to give every child a chance to fulfill, you know, all of their potential — really think about what we’re doing or not do as a country to keep our children safe and let them grow up free of fear — there’s a massive disconnect between our words and our actions, and those are the lies, those are the lies.

Scott: And you’re working now on gun violence. In fact in May, you called essentially for a boycott of U.S. schools until Congress passed stricter gun control. Why did you tell parents to to keep their students at home?

Duncan: Well I just look at the devastation that we see and we just continue to allow children and parents to die in our country at staggering rates. And it simply doesn’t happen in other industrialized countries. It doesn’t happen in Canada, doesn’t happen in Japan, it doesn’t happen in Australia. And this is not rocket science. This is not finding a cure for cancer. We just as a nation lack the political will to keep children and families safe. And I’m going to challenge that status quo every single day, Amy. It’s unacceptable — the trauma, the loss. I hate to say this, literally last night, I was in the hospital with one of the young man who I work with who was shot the night before. He was shot Saturday night. And that’s our reality.