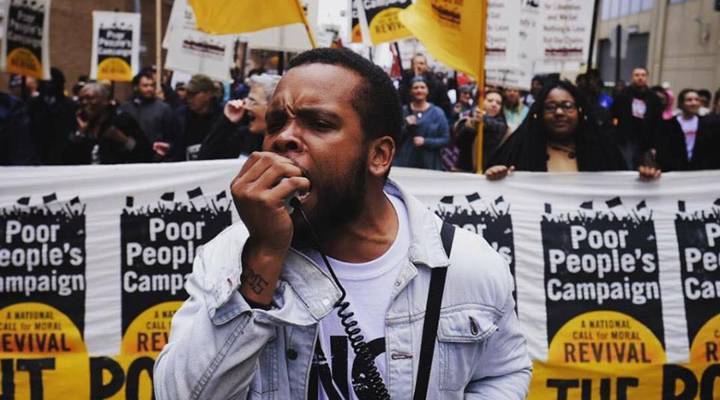 The meeting room in the basement of the First Congregational Church of Memphis was packed on a recent Saturday morning with clergy members, activists, residents and workers. “It’s gone on far too long. It’s gone on far too long,” they chanted, rocking back and forth to a 1960s civil rights anthem. Their purpose for coming together was a four-hour training session on community building and peaceful protest.

Ashley Cathey stood in the front of the room to speak, wearing a black shirt that delivered its own statement: “Fight poverty, not the poor.”

The 28-year-old works the maximum number of hours the law allows for part-timers at Church’s Chicken and the Crowne Plaza hotel. On the weekends she works at a nightclub called Paradise, where she relies on tips.

Since Cathey’s mother died two years ago, she’s been putting in more than 100 hours a week to help take care of her younger siblings. She says she has no health insurance. And she can’t really save money either. For her the phrase “Hard work pays off,” feels like an illusion. “I’m still working hard today so why haven’t it paid off?”

Starting May 14, Cathey and thousands of low-wage workers, clergy, and community leaders in 40 states plan to kick off 40 days of public gatherings across the country to raise awareness about those who have jobs, but still live in poverty. The effort is part of the Poor People’s Campaign: A National Call for Moral Revival. It is a revamp of Dr. Martin Luther King Jr.’s Poor People’s Campaign of 1968. The grassroots effort, which stalled after King’s assassination, sought to raise the wages and overall quality of life for the nation’s working poor.

Around 40.6 million people or 12.7 percent of the U.S. population live in poverty according to data from the U.S. Census Bureau. The U.S. Department of Labor, in its 2014 report entitled “Profile of the Working Poor,” found that black low-wage workers like Cathey are disproportionately poor.

That’s one reason why volunteers with the Poor People’s Campaign say they are planning, over six weeks, to go to state capitals across the country and urge lawmakers to change policies they say reinforce poverty, racism, and conflicts abroad, among other issues.

“We’ve not made any advances in any of these areas and, in fact, in some of those areas people are hurting more,” said Beth Foster, treasurer for the campaign’s Tennessee chapter.

The campaign’s goal, she said, is to bring awareness about the many Americans who are just a car wreck or health emergency away from financial ruin.

According to economist Margaret Simms, a fellow with the Urban Institute, an economic and social policy think tank, the challenge for low wage workers is that there is little opportunity for upward mobility. The structure, she said, is set up in a way that can work against low-wage workers.

“It’s not like if you work really hard and do a really good job, there’s a better job that comes along, a ladder that you can climb,” Simms said.

That means people like Ashley Cathey can’t save money to buy property, invest in stocks and bonds, or pass assets on to the next generation to give them a head start.