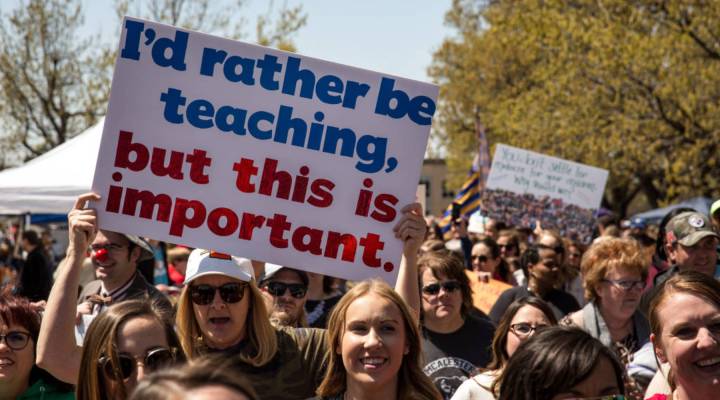 COPY
Thousands gathered and marched in a picket line outside the Oklahoma State Capitol during a statewide education walkout in Oklahoma City, Oklahoma.  Scott Heins/Getty Images

David Brancaccio and Janet Nguyen May 1, 2018

What erupted in West Virginia this winter has become what some call a movement: public school teachers striking for higher pay and more funding for education.

A strike of 50,000 teachers in Arizona now enters its fourth day after a big rally in downtown Phoenix yesterday, but conservatives argue taxes can’t keep getting higher. This strike follows a nine-day walkout in Oklahoma, which happened earlier last month. Among the Oklahoma marchers was Craig Hoxie, a military veteran and high school physics teacher in Tulsa with 18 years of experience working in public schools.

Hoxie has now decided to run for the Oklahoma State House as a Democrat. We asked him if went on the big march because of what he’s personally paid.

Craig Hoxie: No, actually, it’s not. I’m a mid-level career teacher with a master’s degree. So in terms of what we get paid in Oklahoma, I’m doing OK. What our younger teachers — the people newer into the profession are getting paid — is pretty abysmal. But the biggest reason I walked out is just the lack of funding in the classrooms; the lack of services in the state. We reached a point where we can’t do our basic functions anymore.

David Brancaccio: So here comes the other shoe dropping. You’re thinking of running for office now?

Hoxie: I am running for office. The filing period opened up two days after I finished my march to the Capitol, with several hundred of my closest friends now. But I went ahead and filed for state representative in my district.

Brancaccio: If it all works out for you — and I know it’s a long road ahead — but if you win, how might you apply that power to solving the problems you’ve just been discussing in schools?

Hoxie: Well, the biggest thing that we have to do is recognize that we have to bring revenue in to be able to keep society functioning. And so we would be looking very hard at our revenue sources once we got into the legislature. We would also be looking very hard at our other expenditures. We currently have the, if not the highest, next to the highest incarceration rate in the United States, and we’d be looking at why that is. And I I can tell you that one of the main reasons that is is because we are heavily involved in the private prison industry. We have contracts that require us to keep 90 percent of beds filled, and we’re paying huge sums of money for putting people in jail for things that probably aren’t crimes in other states.

Brancaccio: I heard you at the beginning, bit of an irony, that you’re not complaining about your own salary as an 18-year veteran teacher.

Hoxie: I’m not. I’m an 18-year veteran teacher. I spent five years in school administration. I have had to work a second job a lot of the time that I’ve been in education. But in terms of my personal pay, we’re making it. Of course, I could cross the border to Bentonville, Arkansas. And the starting pay for someone with my degree is more than I make now. And the other thing that really strikes me about pay in Oklahoma in general, as low as teacher pay has been compared to the states around us, we still have people who are willing to take jobs as emergency certified teachers to fill the holes that we have, because their other jobs pay so little. It’s not just a problem of teacher jobs, it’s a problem of every job in this state not paying what it should.