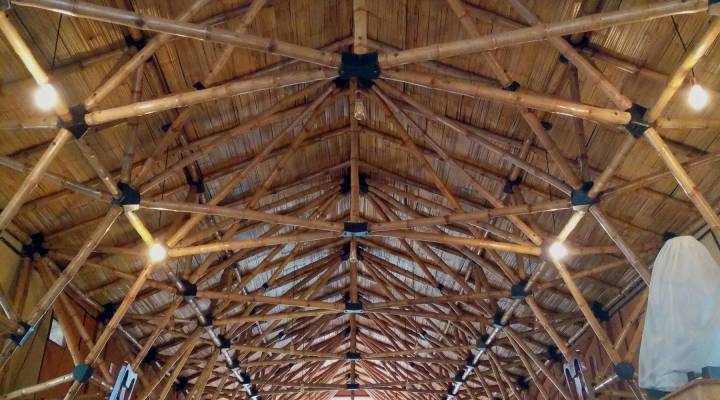 When Nepal’s twin earthquakes hit three years ago, entire Himalayan villages disappeared beneath tons of earth and rock. Hindu temples dating back to the 10th century shattered into shards of carved wood and stone. Urban glass and steel buildings toppled.

But seven miles from the first epicenter, a three-room public school — built to demonstrate local earthquake-proof techniques — was still standing amid the national ruin of 9,000 fatalities and 800,000 homes destroyed.

The school in Balintar is less than 100 miles by road from Kathmandu, but still a nine-hour car journey along twisting mountain tracks. It is no marvel of modern engineering: Built entirely of bamboo and earth, materials any Nepali citizen can find locally. But its survival was a vindication that local building knowledge can be more resilient in a treacherous landscape, home to Mount Everest, the world’s tallest peak.

“Bamboo is very lightweight. It compares to bird’s bone in density, but in strength it compares to steel,” said Nripal Adhikary, the architect behind the surviving school and founder of Abari, a natural construction firm in Kathmandu. “It’s an amazing material — we call it God’s gift. When you build a structure like this, it sways when an earthquake comes and then springs back into shape. Its elasticity is its strength.”

Three years on, stringent government guidelines meant to protect Nepalis from unsafe structures might actually be keeping them homeless. Despite $4 billion pledged by international donors, just 15 percent of earthquake survivors have managed to rebuild, according to Nepal’s National Reconstruction Authority.

“The government has come up with this message that natural materials are not strong,” Adhikary said. “Post-earthquake regulations require people to pour tons of cement to make buildings strong and people don’t have the skill set. They have to bring workers from India to build such homes.”

He says many survivors are still camping in metal sheds without insulation in extreme Himalayan weather.

“It’s terrible, if it’s cold, it gets really cold. It’s really extreme, these sheds have absolutely no insulation and people are complaining about getting sick. The problems are absolutely enormous.”

Adhikary, who trained at the City College of New York and learned about earth construction from architects in New Mexico and South America, says his solution is safer and cheaper.

“We’re fortunate to have about 54 species of bamboo here in Nepal, like the tropical bamboo of Indonesia to the temperate bamboo of Tibet,” he said. “We have bamboo that’s thin to bamboo that’s very thick, like an elephant’s leg.”

In central Kathmandu, Adhikary shows me around the newly rebuilt National Archive, home to the oldest books in Nepali, a language that dates back 2,500 years. Librarians digitize dusty volumes page by page. The temperature and humidity in the open, airy building are constant and comfortable even with the extremes of local weather.

The building comprises a lattice of bamboo poles holding up the thatched roof. The walls are packed-earth mixed with stone, covered in a glaze of milk protein to make them smooth — not unlike the milk brushed on pie pastry to make it lustrous.

Adhikary says the message about the strength of traditional building materials is beginning to get through. In January, the government approached his firm to say they supported natural construction.

And if the physics don’t convince people, the cost might.

“You can make a beautiful two-story house using traditional materials for $5,000,” Adhikary said. “The government is giving $3,000 in grants to construct homes but their regulations are so stringent, it will cost at least $10,000 for a two-room house. Nepali people are resilient, but now they’ve become totally dependent. No wonder only a small percent of homes have been rebuilt.”