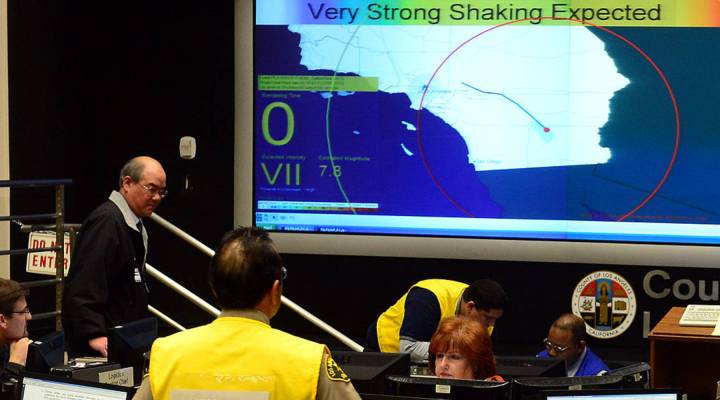 COPY
A screen shows the countdown to a simulated 7.8 magnitude earthquake during a drill for first responders at the Office of Emergency Management in Los Angeles in 2013. FREDERIC J. BROWN/AFP/Getty Images

A screen shows the countdown to a simulated 7.8 magnitude earthquake during a drill for first responders at the Office of Emergency Management in Los Angeles in 2013. FREDERIC J. BROWN/AFP/Getty Images
Listen Now

Experts have been building an early warning system for earthquakes up and down the West Coast, but President Trump’s proposed budget would cut all federal funding for the project.

Now, as Congress digs into the budget, there are Republicans and Democrats fighting to save the program and get it up and running before another big quake hits.

An earthquake warning system consists of sensors spread throughout a region. When seismic waves trigger some sensors, they send a signal to others farther away. People could get a few seconds notice — enough time to take cover or pull over.

After a big push in the past decade, the system is finally in beta testing in some locations around the state. Thomas Heaton, an engineering seismologist at the California Institute of Technology, has worked on this idea since 1985.

“It’s running right here in my office, and it has been running in my office for about 10 years, and I run it in my home,” Heaton said.

The sample earthquake scenario he pulled up on his computer showed a map of California with seismic waves radiating from the epicenter of a quake. Alarms rang, and an electronic voice called out a verbal warning, “Earthquake. Earthquake. Moderate shaking expected in six seconds.”

How such alerts would be sent to the public still needs to be ironed out, with some hoping warnings could be sent to mobile phones located in soon-to-be affected areas.

Heaton said a full rollout along the West Coast would take about 1,200 sensors. So far, there are 800 installed, half of which are in Southern California. Limited public rollout of the warning alert system has been planned for next year, but that depends on continued federal funding. The roughly $10 million the U.S. Geological Survey gets for the program would be wiped out under Trump’s proposed budget.

“If it goes through, there will not be an early warning system,” Heaton said. “I’m pretty confident about that.”

Thomas Heaton, director of the Earthquake Engineering Research Laboratory at Caltech, sits in front of the prototype of an earthquake early warning system.

Los Angeles has already spent millions of dollars on its own to install its warning system sensors.

“We’re going to raise our own money and try to get this done, even if the federal government doesn’t help,” said Jeff Gorell, the city’s deputy mayor for public safety.

But LA can’t fund the full estimated cost, $16 million a year, to cover California and the whole Pacific Northwest. Lucy Jones, scientist emerita at USGS, where she helped get the early warning system going, said earthquake warnings need to come from the federal government, because research centers don’t want to own the system.

“The universities have uniformly said ‘We don’t want the liability of releasing these messages,’” Jones said.

The proposed federal cuts are getting pushback from Congress. A House subcommittee voted last week to keep funding at current levels. The funding proposal has more votes ahead in the House and Senate. What actually shakes out of the budget approval process is anyone’s guess, but California Rep. Ken Calvert, a Republican from Corona who chairs the subcommittee, said it has wide support.

“It’s one of those rare moments we have bipartisan agreement,” Calvert said. “We’re moving ahead.”