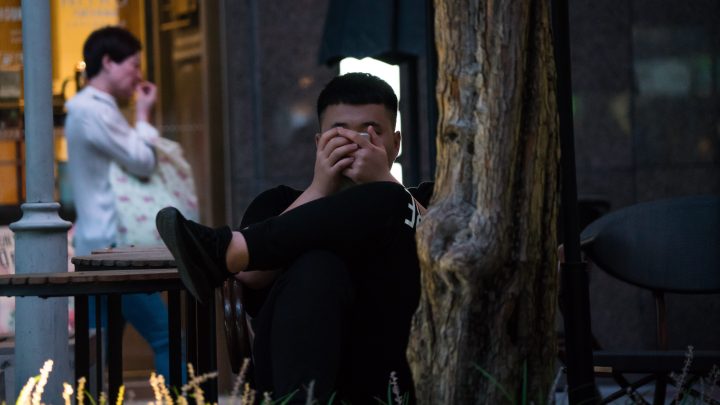 COPY
In China, online and app-based companionship services have cropped up to address isolation. Above, a man sits alone on his cellphone in Beijing. Courtesy Shanghai 808 Studio

In China, online and app-based companionship services have cropped up to address isolation. Above, a man sits alone on his cellphone in Beijing. Courtesy Shanghai 808 Studio
Listen Now

China’s social media app, Tianwei — meaning “sweet taste” — is billed as a safe space for women to chat with men. A local report has compared it to the U.S. dating app Bumble, but there are huge differences.

For one, the app includes a function called “little angels,” where users can order a chat with a professional listener by the hour.

In the firm’s promotional video, a male “angel” answers the call in a smooth and caring voice: “You can talk to me about any subject. Whatever you feel like chatting about, I’ll be here.”

Dating and love are possible but not the purpose of the app, according to Tianwei founder Yang Yihan. “In China, the need for online companionship, which is to say, finding a stranger to chat with, is greater than the desire to date or find a boyfriend or girlfriend,” she said.

The inspiration for the app came from her own needs.

“After I entered the workforce, I felt a lot of anxiety, frustration and a kind of loneliness that few people can understand. So, I hoped I could find a person to chat with me online and relieve me of this pressure when I get off work,” Yang said.

The World Health Organization estimates that 54 million people in China suffer from depression, and about 41 million suffer from anxiety disorders. However, there is a severe shortage of mental health professionals to help. For every 100,000 people, there are 2.2 psychologists and psychiatrists in China versus 42.4 in the United States.

The Tianwei founder grew up with the internet in a small county in China’s southwest. She describes herself as an introvert and finds it more comfortable to express herself online, but found existing chat apps didn’t suit her needs.

“On those platforms, some male users harassed me. Others talked like a census taker. Like if I spoke to 10 guys, I would have to answer the same questions over and over: ‘How old are you? Where are you? What do you do for work?’ When I did find a guy I had something in common with, I didn’t feel it was appropriate to pour my negative feelings out, because they have no obligation to listen to me in this type of social setting,” Yang said.

That is why users on her Tianwei app can sign up to be little angels and receive training on how to listen. If users, who are mostly women, are happy with the chat, they can buy a virtual gift and reward the angel.

In the first six months after launching last year, the Tianwei app reportedly had close to a million users, including college student Wynne Sun.

“Sometimes, after a long day of study, I feel tired and confused and want to get some support from the outside, because, to be frank, women in China are raised to be obedient and likable,” Sun said. “In the process, we’re not taught to think about what we want to do or what kind of person we want to be.”

She has spent over $300 so far this month on the little angels service because she likes having a guy listen to her whenever she needs it. This is a role reversal for her coming from northern China.

“Some places in the north and in other parts of China, women are still not allowed to dine at the same table with men,” Sun said. “And women must keep having babies until they produce a boy as an heir. Of course, the younger generation is pushing back, but — understandably — change takes time.”

Sun, like millions of others, was born under the one-child policy. This generation is sometimes considered to be the luckiest in terms of economic opportunities. But the one-child generation has other problems.

“The generation born in the 1980s and ’90s grew up without siblings. They received too much attention from their families. Their ability to control their emotions, socialization and management skills, their sense of control and belonging, are all problematic,” Tang Yinghong, a lecturer of social psychology at Leshan Normal University in China’s Sichuan province.

He said there is a huge need for therapy in China with the rapid economic development, but there is a severe shortage of psychologists.

Cai Yuping was among the first to be certified as a counselor in China back in 2003.

“There were about 200,000 people participating the examinations in the early 2000s, but 90% of them didn’t continue to work as psychologists after getting licensed,” Cai said.

Part of the reason is that, back then, and even now, it is tough to make a good living. People are reluctant to seek help.

“People feel ashamed, and there is a stigma. If someone is schizophrenic, they’re just called crazy people,” Cai said.

She said China’s government has started to pay more attention to mental health since 2008 after a magnitude 7.9 earthquake struck Sichuan province.

Nearly 90,000 people were killed, including many children who were still in class at the time the earthquake hit.

Officials called for volunteers to counsel survivors, but in a way appropriate for Chinese people.

“I signed up to give counseling, but soon I found it was immoral to do the job. It was immoral because my order at the time was to calm down earthquake survivors and make them give up their demands to the government. The earthquake was a natural disaster, but there were also problems where some people should be held accountable,” social psychologist Tang said.

For instance, some parents who lost their only child wondered why so many schools collapsed during the earthquake when nearby buildings didn’t.

Tang said he left the gig after only two days. It is hard to be a therapist in China.

“Chinese society is, let’s call it, an ‘imperfect’ society. There are many abnormal things in this country and that poses a dilemma. If you tell the patient to follow social rules here, their mind will be distorted. If you tell them to be honest and defend their rights, they will face official pressure,” he said.

In the meantime, therapy work bleeds into other industries. Education consultants, dating coaches, matchmakers and even people who help wives get rid of their husband’s mistresses interviewed by Marketplace have said they often become inadvertent therapists for clients.

During the pandemic, so-called boyfriend chat services for women cropped up. A video on TikTok’s China version demonstrated that for less than $5, a young woman can order a smooth-talking guy to flirt with her friend for an hour. While many of the services were borderline pornographic, Tianwei app founder Yang feels it is another way to address the isolation young people feel.

“The pandemic was a catalyst for young people’s loneliness, and their need for companionship increased because they couldn’t go out easily,” she said. Her app has already received more than three rounds of funding amounting to over $1 million.

In addition to the little angels listening service, the Tianwei app provides one-on-one companion services for those going through breakups, those who have insomnia and even artificial intelligence boyfriends. Users can also sing in a virtual karaoke session, while others join in.

“Therapy is expensive for our users, and most of them don’t think they have psychological problems. They just feel a bit down and want someone to listen to them,” Yang said.

She said her app’s services are more than affordable. One of Tianwei’s marketing slogans is: “Online companionship for the price of a bubble tea.” 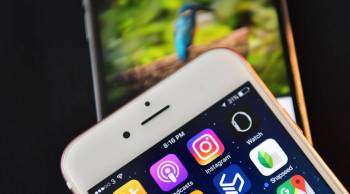