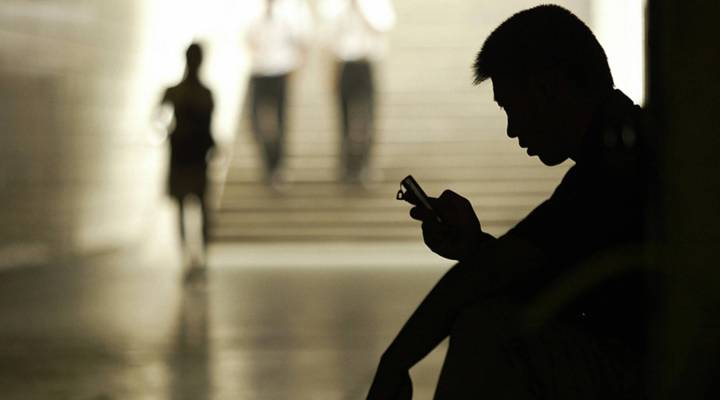 COPY
A man uses his mobile phone for messaging in an underpass in Beijing 20 July 2004. PETER PARKS/AFP/Getty Images

A man uses his mobile phone for messaging in an underpass in Beijing 20 July 2004. PETER PARKS/AFP/Getty Images
Listen Now

Yao was happily married for more than a decade. Then last January, just before the Chinese New Year, she received a phone call.

“It was a young woman. She said my husband was not going on vacation with me and the children, because he was going to be with her,” Yao said. She declined to give her full name to protect her family’s privacy.

After she received the call, she told her husband that she was going out to meet a friend named Ming Li, who advised Yao to avoid confronting her spouse and go on the family trip as planned.

Yao followed the advice. Ten days later, a woman half her husband’s age was standing at their doorstep. It was his mistress.

“I ran to the bathroom and called Ming. I said, ‘What should I do? The enemy is at the gate!”

Ming recalled going over to facilitate talks between Yao, her husband and the mistress.

“I was introduced by Yao as a friend, as a trusted older sister who happened to be trained in psychology. The mistress also listened to what I had to say,” Ming said.

What the husband and his mistress didn’t know was that Yao had hired Ming to break up the affair.

Ming is known as a “mistress dissuader.” Her job involves infiltrating the lives of mistresses and get them to break off the affair.

In Yao’s case, the husband was willing to cut ties with the other woman. Yet the mistress would call Yao to harass her. Ming had to intervene, and eventually the mistress stopped contacting Yao’s family.

“That’s because I introduced the mistress to a new boyfriend,” Ming said and laughed. She can also find mistresses a job in a new city.

There are no exact figures on how many mistress dissuaders there are in China, but Ming’s firm, the Weiqing Love Hotel, is among the biggest with nearly 300. The company has been offering mistress dissuading services since 2010.

“I am the protector of a couple’s marriage,” Ming said.

The unorthodox business of mistress dissuading has cropped up as the number of divorces in China steadily climbed for more than a decade. In 2016, there were 4.1 million divorces. That works out to three divorces for every 1,000 people in the country, which is still below the United States. Some local governments in China have cited incompatibility, domestic violence and extramarital affairs as leading causes for divorce.

This has coincided with China’s burgeoning wealth. Men are expected to buy their mistresses apartments, cars and luxury gifts. Having a mistress is a way to show off money and power.

Local media have reported that 90 percent of government officials investigated for corruption a decade ago had mistresses. In recent years, some Communist Party members have been brought down publicly by their mistresses in an intensive anti-corruption campaign.

Yao recalled attending her husband’s industry functions and saw company bosses bring women who were not their wives, but said she never suspected her husband was unfaithful. She was devastated when she found out about his mistress.

“I felt like the sky had fallen down,” Yao said. Yao said without Ming’s help, she would have felt isolated through this ordeal because she did not tell any family or friends about her husband’s affair. “Chinese families are conservative. There is a Chinese saying that domestic shame should not be made public,” Yao said.

That included speaking to a couple’s therapist.

“My husband would never agree to see a therapist because that would be acknowledging that he has a problem, and he wouldn’t do that in front of others. He’s a male chauvinist and is very concerned about not losing face,” Yao said.

Thus, for an extra 200,000 yuan ($31,500) a year, Ming advises Yao on how to “preserve” the marriage. The fee also includes her time spent counseling Yao’s husband, who confides in Ming about marital issues. Ming said the husband thinks of her as a trusted friend and does not know her identity.

The deception involved in dissuading a mistress has attracted criticism from some psychologists and lawyers, who said that the industry is unethical, even illegal.

Private detective Dai Pengjun insists he does not break the law while trying to help his clients get rid of a mistress. He wants government recognition and regulations for mistress dissauding to unlock the industry’s full potential.

Dai’s path to becoming a mistress dissuader is, according to him, entirely by “customer demand.” His primary work is in what he calls “marriage investigations,” where his clients, typically women, want to know if their spouses are cheating. Once Dai confirms that a spouse is cheating, some of the women would divorce their husbands, while nearly a third of these clients wanted to save their marriages. Dai said the best way he could help was to remove the “immediate threat” to the marriage — the mistress.

He has been offering mistress dissuading services since 2012. Dai’s tactics include sending a female to befriend the mistress, which can be challenging.

“Once, we discovered that the mistress’ apartment had a balcony, so we threw something on her balcony and pretended to be her neighbor to retrieve it. That’s how we struck up a conversation with the mistress,” Dai said. Other times, he hires a handsome man to seduce the mistress and send photographic evidence to the husband. “In mainland China, most men would not want their mistresses to have other lovers,” he said.

In extreme cases, Dai said he might offer the mistress money to walk away from the affair.

“We would suggest our client to talk to the mistress directly and bring a bag of cash,” he said.

Dai’s charges can add up to more than $150,000 for two months of work, which is far more than what he could earn as a high school graduate in his hometown in eastern Jiangsu province. Wives of wealthy men are willing to pay his fees because China’s divorce law favors the man and divorce is still a major stigma.

“It can affect your children. They will be less desirable as marriage candidates,” Dai said.

There is no guarantee of success in marriage dissuading. Dai said only 50 percent of his cases work out. He refers to the mistress as a “cancer in the marriage.”

“We are merely doing an external surgery. Whether the marriage can be saved depends on the couple,” Dai said.

For an extra fee, he also provides counseling for wives.

“I might say to her, ‘You’re in your 30s or 40s. You are old. Your beauty will fade. You must exercise, avoid late-night snacks or you’ll get fat,’” Dai said.

To receive this service, it seems customers don’t just need money but also a thick skin.